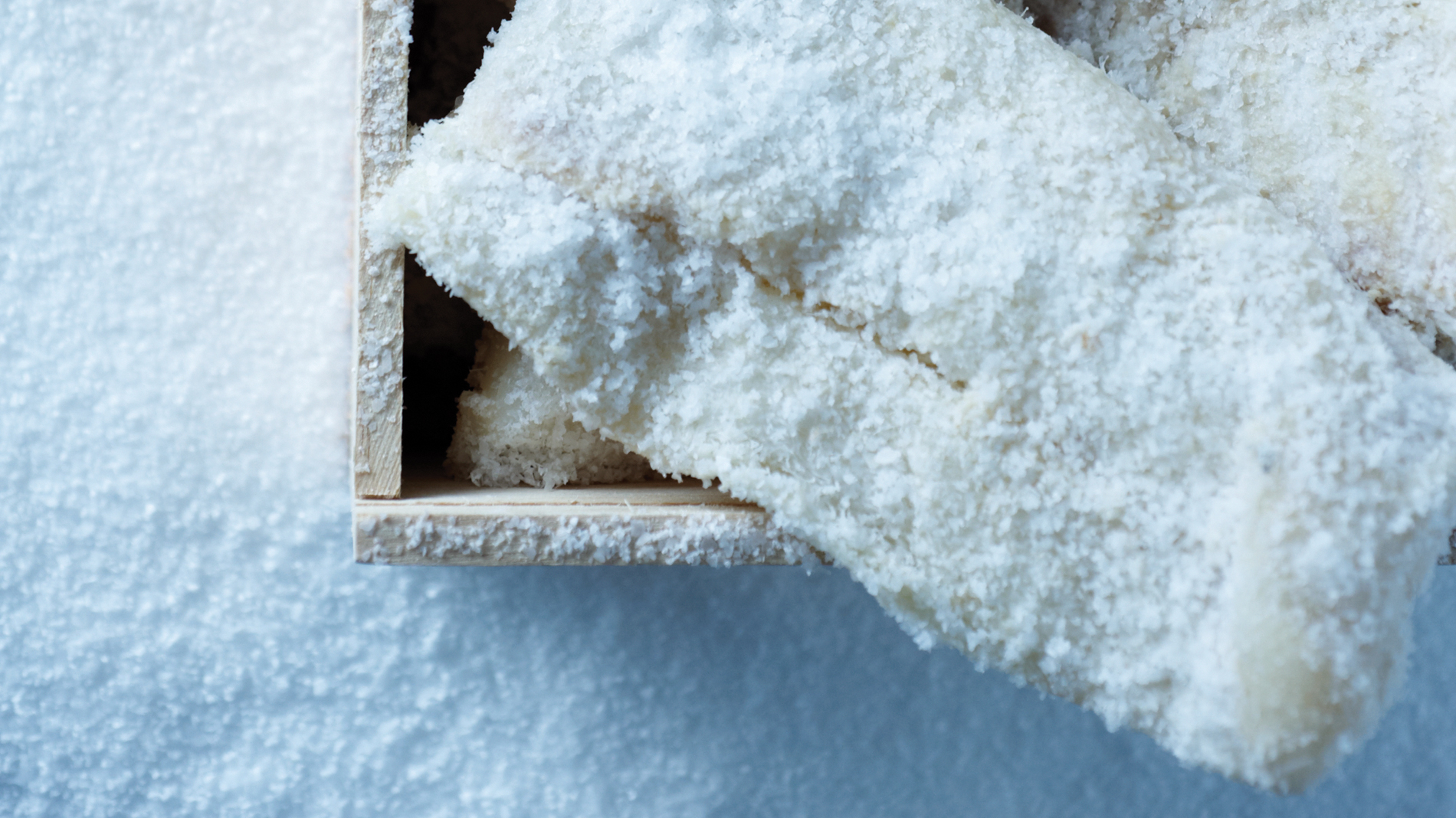 A Nod to Cod

Salt curing transforms this fish from simple to complex

For centuries, cod has been a choice fish for curing. And although the advent of refrigeration might have made durable dried cod an Old World has-been, cured cod still remains on menus – at a few of your favorite restaurants in town, no less.

Brandade de morue is one of the most widely known and beloved salted-codfish dishes. This smooth purée of hydrated salt cod, olive oil, garlic and milk made its way from being rustic fare created by peasants of Provence to a signifier of classic French cooking.

The creamy brandade at Brasserie by Niche in the Central West End is particularly interesting because it features cod that’s cured in-house. Executive chef Perry Hendrix starts with fresh Northeast Atlantic cod fillets. For every pound of fish, he adds about an ounce of kosher salt; he called that “a fair amount of salt, but probably a little bit lighter than what would be done in a traditional Portuguese or Italian or Nordic [manner], where it’s super-heavy, packed on and left for weeks, months.” Next, he refrigerates the fillets, setting them on a rack with a catch pan placed below. Ideally, he’d leave the fish to cure for seven days, but Hendrix said that after as few as three, it’s ready to be desalinated; that process entails chunking the fillets, then soaking them in fresh water for 24 hours, with two to three water changes.

Doesn’t all the salting and unsalting just restore the fish to its original fresh form? “You get a concentrated cod flavor,” explained Hendrix. “Cod as a whole is a pretty mild fish. When you salt it and then unsalt it, it has a different texture to it. Once you’ve taken the salt out, it has this rubbery nature to it.”

With the cod thus cured, the next step varies. “You can eat it at that point, and there are some traditional Portuguese and Italian dishes where you just do a thin slice of salt cod and serve it with a bright citrus salad or parsley salad,” Hendrix said. “But at this point, we cook it to get it soft enough to where it looks like cooked fish – where it’s flaking apart.”

He cooks the salt cod with milk, russet potatoes and fresh garlic, beats it with a paddle and adds more milk until it reaches the desired consistency. For seasoning, Hendrix adds garlic oil, more garlic and, of all things, salt, which he conceded is “pretty funny again that we’ve added salt, taken the salt out, and it needs salt by the end.” Hendrix noted that some brandade recipes omit potatoes – the Provençal original, in fact, had none – while others call for bread crumbs.

Buñuelos de bacalao, another salt-cod specialty, hail from Spain. The main ingredients that executive chef Grace Dinsmoor uses for these fritters at Modesto on The Hill are salt cod, potatoes and egg whites. After soaking the cod for a couple of days, she cooks it with potatoes, then removes the fish and allows the potatoes to continue cooking until soft. Afterward, she mashes the mixture, seasons it, folds in the egg whites, then fries the fritters to a golden brown. Dinsmoor’s buñuelos are served with a lemon aioli. An oil and garlic aioli is typical of Catalonia, she noted; the citrus is her personal touch.

These days, with strict cod fishing regulations and improved technologies for transporting fresh fish, salt-cod consumption may have reached its nadir. “It’s a dying art form,” said Phil Nikic, wholesale manager at Bob’s Seafood in University City. He added that as different ethnic groups migrated to the United States, they lost a number of traditional cooking methods, including those related to salt cod. Still, chefs continue to play with it.

Are you willing to do likewise? The salt cod sold at Bob’s is an Atlantic cod from Canada that comes in frozen pound blocks. It’s been skinned and boned, so all home cooks have to do is reconstitute it in water before cooking. For more adventurous types, the seafood shop also stocks lutefisk – a traditional Norwegian offering made from either stockfish (air-dried cod) or salt cod. Bob’s has it frozen, skinless and semiboneless, processed from north Pacific cod by the folks at New Day Fisheries in Port Townsend, Wash.