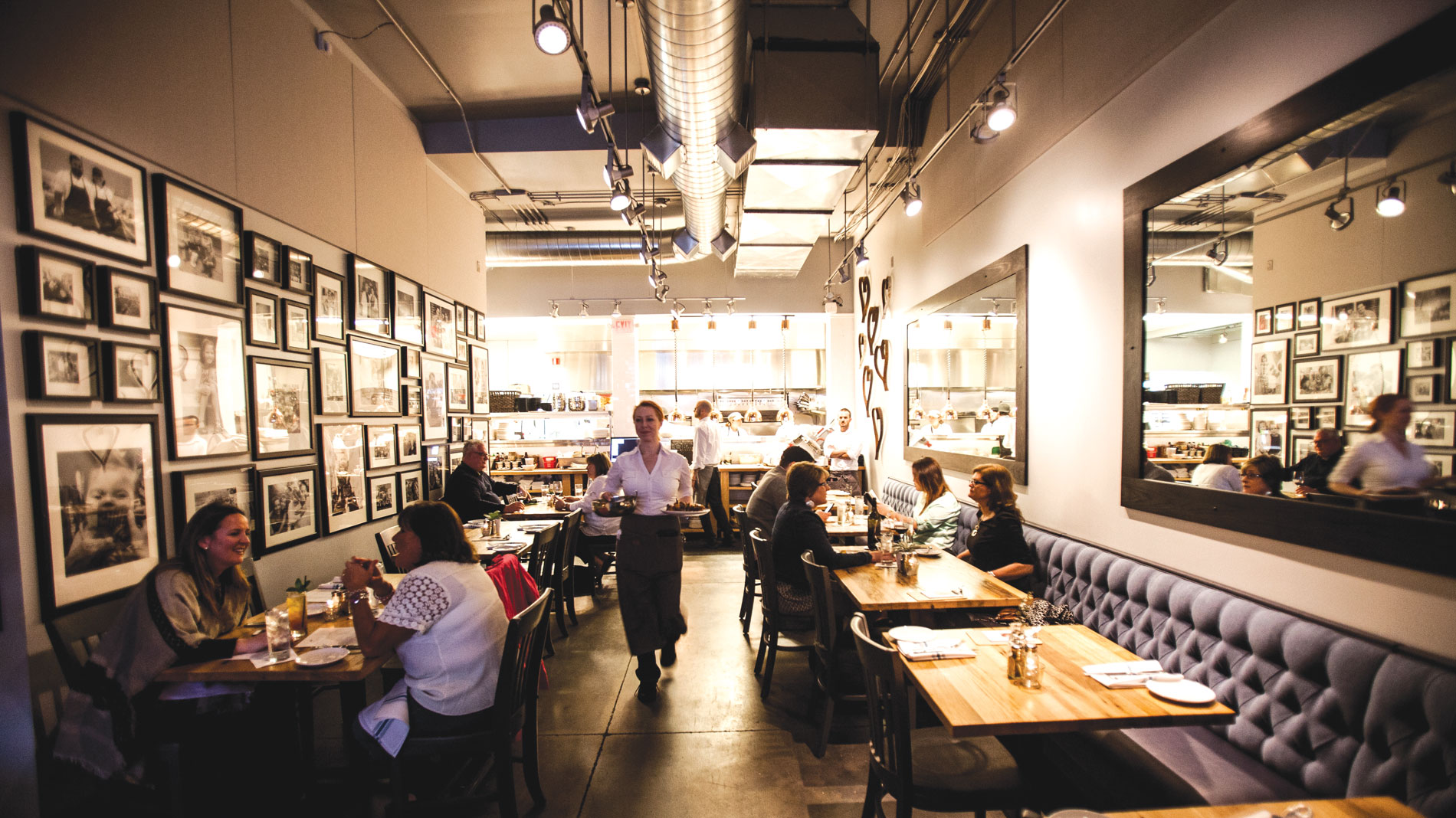 It’s December, nine months from now, when everything eaten and drunk during the previous year has been reduced and assembled into a flurry of top 10 lists. You read that Olive & Oak is the Best Restaurant of 2016, bolstered by claims that the appetizer of smoked chicken meatballs “impressed more than any mere meatball should, more than any could” and that “the folks at Olive & Oak seem to have a knack for delivering what we want.”

Rewind to the present. Olive & Oak is 3 months old, and the throng of diners continues unabated. Owner Mark Hinkle and business partner Greg Ortyl, along with executive chef Jesse Mendica, have found that elusive sweet spot: a neighborhood eatery (a place people want to go to, not just because it’s close) and a destination restaurant (where people drive to Webster Groves to dine).

Both Hinkle and Mendica came from the celebrated Annie Gunn’s in Chesterfield, where he was general manager, she the executive sous chef. It’s one reason why there’s a bit of Annie Gunn’s wafting about Olive & Oak, like the emphasis on ingredient-driven and straightforward cooking, thoughtful wine selections, informed service and an atmosphere that’s on the upper side of casual. It’s a place where, hyperbole aside, there is something for everyone; where you can spend a lot – or not.

Potpie and roasted chicken brought simple comfort. I punctured the potpie and puffs of fragrant steam escaped from its buttery, flakey robe, revealing a treasure of mushrooms, kale, butternut squash and cauliflower bubbling in an earthy roasted leek gravy. The roasted chicken was just the right size: a crispy, juicy airline cut on a bed of braised tiny, creamy flageolet beans. If the dish sounds monochromatic, the preserved lemon salsa verde on top added not only a verdant splash but also an herby piquancy.


Mendica knows her way around beef and fish. Thankfully, both are always featured on the constantly changing menu. A tenderloin, beautifully tender and fork-ready, came atop a cushion of cracked-pepper grits with a simple arugula salad for a bit of contrast. Fish selections change depending on what the restaurant’s purveyors catch and fly in. Order whatever it is. One night it was fluke, pan-seared to a golden crust, zapped with a bit of piercing pickled jalapeno-cucumber salad on top and black bean puree underneath, a seemingly incongruous combination until I had a little of everything on my fork. Sometimes taste makes sense of the visually unexpected.

There were oysters, crab, shrimp and a stuffed clam so fattened with lardo and casino butter that it encapsulated the perfect bite of sea and earth.

And those chicken meatballs? Four walnut-sized orbs of ground smoked chicken, simultaneously firm and fluffy, rested in a cloud base of whipped ricotta, all doused with an agro dulce (sour-sweet) sauce spiked with golden raisins, currants and apricot that surprisingly didn’t smother the chicken’s smokiness.

The century-old, 2,600-square-foot space in Old Webster is nothing short of cool: high tin ceilings, tufted banquettes, cement floor, subway tile bar back and rustic wood tabletops. Two hearts – one a red neon light above the bar, the other carved from oak mounted near the entrance – signify more than a design choice. Hinkle and Ortyl originally met through charitable work for their sons, Oliver Hinkle and Oakes Ortyl, who both died in infancy from congenital heart defects. The restaurant was named in their honor.

The long, narrow-ish room is made visually wider by five huge mirrors. There’s storefront seating, but try to sit in the back near the open kitchen, where it smells especially good and the hustle-bustle of a busy night quickens the pulse. If you don’t make a reservation, you will sit at the bar – which isn’t so bad.

The beverage program is both broad and familiar. Hinkle parlayed his wine knowledge into a well-designed selection of wines by the glass and an extensive bottle list, including half-bottles. Same goes for beer: All eight drafts pour craft brews with eight times that available in bottles. I like that Olive & Oak labels its cocktails by numbers, eschewing cutesy names and tiresome plays on words. Want a boozy whiskey drink laced with Big O ginger liqueur and hints of lemon, lime and torched rosemary? Order the No. 69 (actually, that is kind of funny). Like something with herbally Yellow Chartreuse? Get the No. 71, mixed with Amaro Nonino, lemon and cardamom.

AT A GLANCE: OLIVE & OAK
Where

Vibe
Upscale casual with a cheerful buzz, but when packed it’s as loud as a Republican debate.