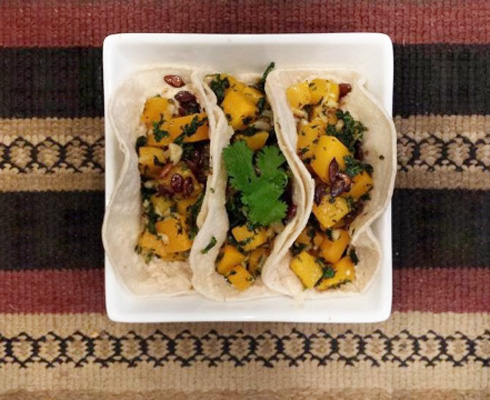 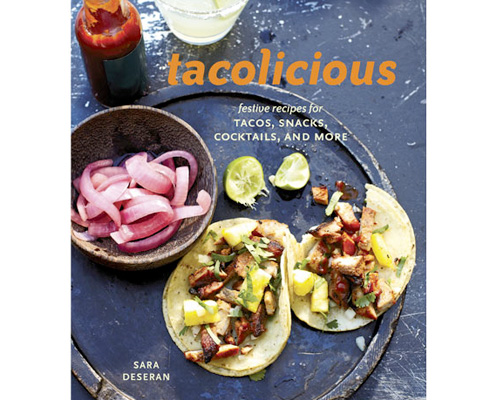 Tacolicious is a collection of Mexican recipes with California flair taken from its namesake: Tacolicious, a Mexican restaurant in the San Francisco Bay area. There are actually four Tacolicious restaurants in California now, an impressive feat for something that started off as a farmers market stand run by Sara Deseran and her husband Joe five years ago. Her debut cookbook includes popular restaurant favorites like tacos, empanadas, salsa and cocktails. A strong love for Mexican cuisine and party-appropriate dishes are laced throughout Deseran’s writing.

As I flipped through page after page of colorful, festive Mexican dishes, I was intrigued by this seasonal recipe described as a “nontraditional taco, sweet with squash, earthy and nutty with kale, and crunchy with fried pumpkin seeds (pepitas).” I was pleasantly surprised to discover that these tacos were also vegan. A good friend of mine follow this dietary lifestyle, and I’ve realized how hard it is for her to find just about anything completely vegan-friendly at Mexican restaurants. 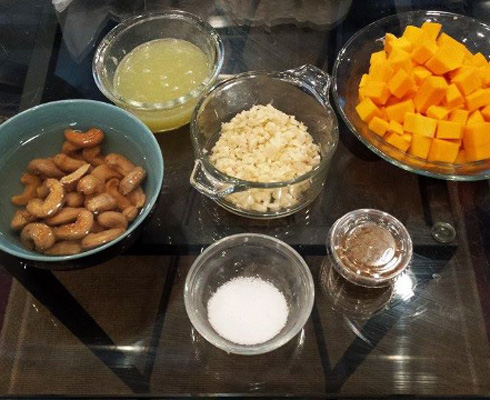 The recipe was fairly easy to follow, although I did deviate slightly, using ground cumin instead of cumin seeds and soaking my raw cashews for only a half hour as opposed to the full hour suggested. Deseran has the cook use a blender or hand mixer to blitz together the soaked cashews, cumin, lime juice, water and salt. The result was a zesty vegan crema that appeared like hummus in its consistency and color. Presoaking the cashews for a less time than recommended caused no issues; they blended just fine. I did feel that the completed crema was quite heavy on the lime juice, but I left it alone to see how it would taste when combined with the sweet squash and flavorful kale. 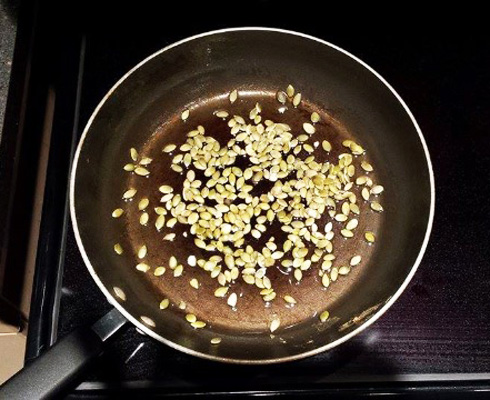 I tackled the pumpkin seeds next. I was unable to get my pepitas to “puff up and pop” as the recipe described, so after sauteing them for two or three additional minutes, I sampled a few and decided to settle for the toasted ones I had created. I seasoned them with some cayenne and salt and set them aside to focus on the filling. 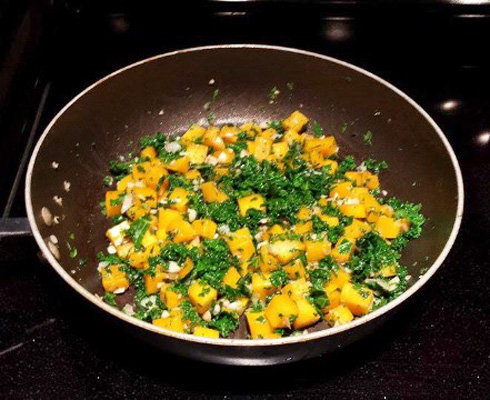 I had no problems with the filling as I sauteed some onions and then tossed in some garlic, later adding in my squash and finally some chopped up kale, which needed a few extra minutes than the recipe called for before taking the filling off the stovetop.

I built my tacos with a smear of crema on the base of my tortilla before adding the squash filling, then garnished them with the pepitas and some cilantro. The tacos were visually appetizing: the bright orange squash contrasting with deep green kale, and the pepitas adding a rustic touch. They also packed a ton of flavor; the cashews and lime juice provided a creamy, tangy base for the sweet squash and earth kale, and the pepitas gave them a much-needed crunch factor.  However, I would still probably use less salt and lime juice next time.

• To make the crema, soak the raw cashews in room-temperature water to cover for at least 1 hour. Drain and reserve.
• Toast the cumin in a small, dry, heavy skillet over medium heat for about 1 minute, until fragrant. Transfer to a spice grinder, let cool, and grind finely.
• In a blender, combine the cashews, cumin, lime juice, water and salt. Start the blender on the lowest speed and gradually increase to the highest speed. Blend for at least 1 minute, until a creamy consistency. Pour into a serving bowl and set aside.
• To make the pumpkin seeds, heat the vegetable oil in a heavy skillet over medium heat. When the oil is hot, add the pumpkin seeds and saute for about 2 minutes, taking care that they do not burn. The seeds will begin to puff up and pop. Once they appear toasted, immediately pour them into a bowl. Toss with the cayenne and salt and set aside.
• To make the filling, heat the oil in a large, heavy skillet over medium heat. Add the onion and saute for about 3 minutes, until softened. Add the garlic and saute for about 1 minute more. Add the squash and saute for 6 to 7 minutes, just until the squash begins to soften. Season with the chile powder and salt.
• Add the kale and cook, stirring, for about 1 minute, until it begins to wilt. Remove from the heat, taste, and adjust the seasoning with salt if needed.
• Serve with the tortillas, crema, pumpkin seeds, onion, cilantro, and salsa. To assemble each taco, invite guests to spoon about ½ cup of the warm filling into a tortilla and top with some crema and pumpkin seeds. If guests want more toppings, they can finish off their tacos with onion, cilantro, and salsa.

Thanks to 1111 Mississippi for providing the cumin for this recipe.

What's the most unique taco filling you ever tried? Tell us in the comments below for a chance to win a copy of Tacolicious by Sara Deseran.