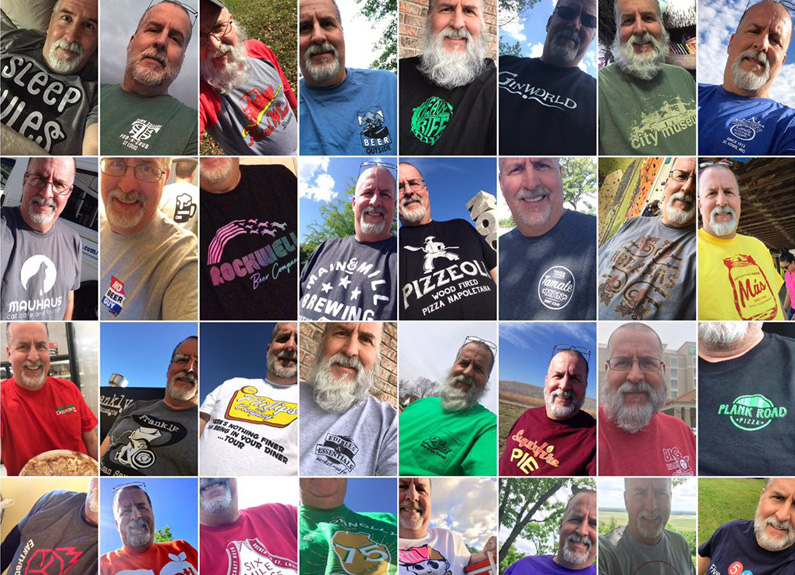 One of St. Louis’ greatest supporters is gone. Mike Arnold, owner of Gus Gus Fun Bus and a tireless proponent of local restaurants, breweries and other businesses, died on Thursday, June 21, from injuries sustained after he was hit by a car during a robbery on Saturday, June 16. He was 54.

“Mike was a singular person,” said Troika Brodsky, executive director of the St. Louis Brewers Guild. “What he put out online, the enthusiasm and curiosity and interest and love he had for not just his family but the community and the businesses and the people who were running these businesses, was incredible. He wasn’t just posting pictures. He got to know the owners and the chefs. That’s why you’re seeing the outpouring of love that you are. He impacted all of these people so directly.”

Brodsky set up a GoFundMe to support Arnold’s medical costs last weekend. The fund has raised more than $21,000 so far, and dozens of area restaurants and bars have hosted fundraisers to contribute to the fund. That fund will now transition to assist Arnold’s wife, Suzanne Arnold, and his family with funeral costs and other expenses.

Donations to the Go Fund Me site are still being accepted, and Brodsky plans to host a large-scale fundraising event as well.

Restaurant industry professionals from around St. Louis recalled Arnold’s dedication to their businesses.

“I didn’t even know Mike when we were opening the restaurant,” said Jessie Gilroy, chef-owner of Pangea. “Suddenly I had all of these random messages, and he’s putting the word out about the restaurant, and he was the first person to congratulate us for everything. He just did everything he could to support me.”

Brodsky said Arnold had an “uncanny ability” to be everywhere. “Every food and drink event that was happening in St. Louis, every new brewery that was opening, every piece of news about our culture, he somehow manage to know about,” he said. He added that Arnold’s efforts were altruistic. “He didn’t get paid to do this. He didn’t monetize his brand. He did this out of pure love.”

Gilroy agreed. “He never asked for anything in return,” she said. “It wasn’t about his business. He just wanted to support the culinary community. You don’t meet many people in the world that just want to help other people.”

Guerrilla Street Food co-owner Joel Crespo said Arnold was the embodiment of St. Louis pride. “He was a kind and generous human being who genuinely loved and supported this city,” Crespo said. "You could go to any food event or festival in St. Louis, and he would be there. We should all be inspired by his example.”

Sauce founder and publisher Allyson Mace said Arnold was a true St. Louis ambassador. “It’s a very sad day for the city,” she said. “Mike was such a champion of all that makes our city great, especially of those in our thriving culinary scene. He will be missed by many, but never forgotten. Our thoughts and prayers go out to his family and friends.”