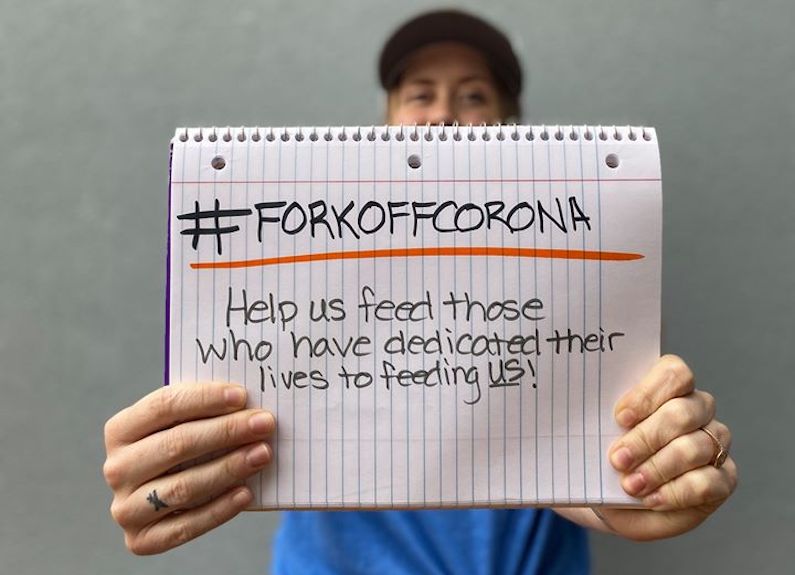 Topograph, a San Antonio-based marketing company, is starting a #ForkOffCorona campaign designed to give back to restaurant industries in over 10 U.S. cities, including St. Louis. Starting today, March 25, until April 12, Topograph will host live events on Facebook with key figures in the food and drink business in their respective cities.

To raise funds for local businesses, Topograph is selling T-shirts unique to St. Louis as a way for people to remember this unique and difficult time.

“It’s not funny now but, in a few years, they may be sporting the shirt, and it’ll be a nice memory of how we all came together to support each other during this difficult time,” said Jessica Healey, co-owner of Topograph.

Wednesday afternoon, Healey and co-owner Courtney Cobb plan to talk to Billy Foster and Kathy Kuper, the creators of The Big O Ginger Liqueur based in St. Louis.

“I wanted to get their view because, even though they aren’t directly in the restaurants, they are on the shelves and are feeling the ripple effect of this,” Healey said. “I wanted to give a voice to that as well.”

Along with Foster and Kuper, Ricky and Elisa Lewis of Grace Meat + Three, Ted and Jaime Kilgore of Planter’s House, and chef Liz Schuster at Tenacious Eats will also be interviewed live later this week.

Topograph is a marketing company that works with small businesses in lifestyle industries. With friends and family working in the restaurant industry nationwide, Healey and Cobb decided to expand the campaign across the U.S.

Healey said that ideally, Topograph would be able to donate a few thousand dollars to each city to reinvest in the food and drink industry.

“If it’s just a small impact that it helps clusters of employees that have been laid of or let go, we’re able to provide a few meals or gift cards,” Healey said. “[We would like to donate] anything to provide just a moment of relief so they can just have some clarity in part of their day. Any relief is good relief.”

Healey said Topograph is still looking into where they would specifically donate any funds raised, and right now they are working on adding a place where viewers can make monetary donations to their city instead of purchasing a T-shirt.

The #ForkOffCorona Facebook Live event begins at 4 p.m. CST Wednesday on the Topograph Facebook page. T-shirts will be available for purchase Wednesday. You can find a full list of speakers on the Facebook page.