Saint Louis has always had an odd mixture of bars. We have the glamorous Manhattan style supper clubs on Washington Avenue, blue collar working stiff bars in the neighborhoods, cutting edge music venues, and everything in between. But sometimes you find a bar that you could not even imagine existed.

Alibi's is located in an old building that used to house the Bavarian Inn a stone's throw from the South Grand business strip. The Bavarian Inn was a Saint Louis institution in the tradition of the many Saint Louis German influences, like Bevo Mill and Gus' Pretzels. The bar had traditional German food, oom-pah bands and the architecture looks like the building comes straight out of the old country.

Alibi's is the new business in this old German building. Alibi's is a gay men's bar. Alibi's also has drag queen shows. But it has a decidedly different flavor than the other glamorous drag bars of Saint Louis. The bar still draws, but usually doesn't hold, elderly second generation Germans that come in to this radically different environment, which is typical of many bars across Saint Louis that have radically changed their themes, such as the old Way Out Club when it was on Cherokee. The old Way Out location on Cherokee was an infamous and popular Sports Bar called Thurmers. The Way Out always had old timers coming in to their decidedly freaky pub, surprised at the changes of the new bar.

Alibi's is still a full service restaurant, and is still traditionally decorated with all of the original ornate woodwork and plush booths. The interior is dark with almost no light coming through the stained glass windows and the dimmed old style chandeliers.

The bar is generally frequented by gay men, most of whom range in age from their late 20s to 60s. There are a smattering of progressive straight folks, lesbians and an oddball bunch of neighborhood folks. The 3am license is key in attracting a more diverse crowd in the late hours than just the typical gay bar scene. The South Side has only four 3am licensed bars outside of the downtown area, so when folks are thirsty and on the South Side, they tend to be more adventurous regarding their destinations, whether they are going to the frat boy scene at Johnny Gitto's, the hipper than hip funky dive Sandrina's, or the drag bar Alibi's.

The drag show is unique. It is not the ultra glamorous show that you might find at Magnolias, nor is it as consistently nasty as the show you may find at Faces in East Saint Louis. It has more of a home-style feel. These queens seem more like people you might find in everyday life. The queens perform of a range of drag classics like Cher, Madonna and other more obscure (at least obscure to me) pop dance mixes. The queens vary in size, but a number of them tend to be on the more ample end of the spectrum. They have such names as Khrystal Light and Dieta Pepsi. The outfits are homemade and outrageous. The queens have all the right curves, energy, the look and the walk.

In the restaurant room, the stage is small and so is the technical production, but the show is raw in a good way. The queens will announce from the backroom while changing into new outfits. The crowd is usually interactive, bordering on boisterous as the hour gets later. The queens will tease members of the crowd as they shake their stuff and will pull patrons out of the crowd to dance. The show is bawdy, but only in suggestive ways. The jokes, which are a staple of the drag queen scene, are usually humorous, off color and tasteless. And funny if you are in the right frame of mind.

The show that often precedes the drag queens is what the owner likes to call the "stripper boy". He is technically not a stripper, but just a beefcake "Chippendale" looking young man who dances around suggestively in his underpants. The owner sheepishly admitted that this somewhat cheesy performance would precede the big show. The early evening hours can be somewhat eerie with only a few lone patrons in the room and only a gyrating guy on stage. The show picks up with the fun and humor that the drag queens bring in the later hours.

Alibi's has a rather nice large patio with a volleyball pit, but it is seldom used for they don't regularly let patrons out there after midnight due to neighborhood concerns.

The scene at Alibi's is different than what is found in the gay glamor clubs in Midtown, but it is still an offbeat stop for anyone on the weekends when the hour is later and something different is sought. 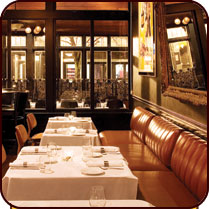