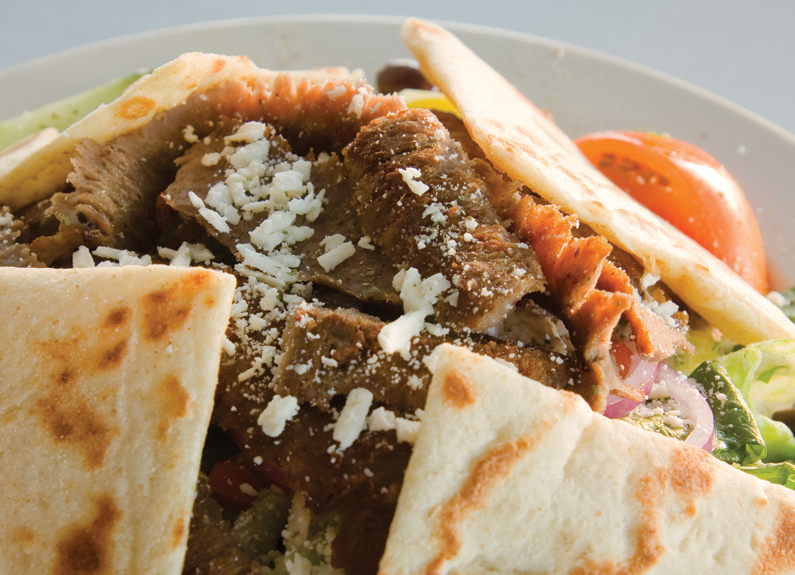 Don’t let the selection at Ari’s Restaurant & Bar fool you. If it’s Greek fare you’re after, you’re in the right place. Yes, the menu is dotted with an odd mix of Italian, American and local dishes, but look past the fettuccini Alfredo, Philly cheese steak and toasted ravioli, because Greek is the way to go at this warm, welcoming and cozy South City spot.

The Hellenic highlights start with the appetizer list, which features many Greek classics. As expected from a Greek restaurant, the hummus is excellent: light on the lemon and salt, heavy on the garlic and tahini, and enhanced with a sprinkle of paprika and a swirl of olive oil on top. The avgolemono, a hearty, egg-based soup made with orzo, chicken and lemon, is savory and tart without being too rich, making it an excellent opener to any meal.

The dolmathes’ tart and vinegary grape leaves are tightly wrapped around finely diced, heavily herbed beef. The flavor is bold if grape leaves aren’t a part of your regular diet, but the richness of the lemon sauce resting on top and the hot, tender rice under the rolled leaves balances out the tartness. Another good starter is what the menu calls spinach pita but you’ll know as spanakopita. Ari’s version of the pie, served warm, delivers crispy-on-the-outside, soft-on-the-inside phyllo dough that encases a savory spinach and feta filling. Like the dolmathes, it can be on the rich side, but between the slight sweetness of the dough, the saltiness of the cheese and the bitterness of the spinach, it satisfies every taste bud on your palate.

Ari’s Famous Greek Salad is large enough for two to share and features Ari’s thick-cut gyro meat draped across an iceberg-romaine mix tossed with Greek vinaigrette dressing and studded with onions, cucumbers, tomato, pepperoncini and olives. Made in-house, the full-flavored gyro meat is the star here; any dish that features it is worth ordering.

Among the entrées, chicken Pena was a standout: a large portion of flavorful chicken breast smothered in a Provel cheese sauce, artichokes and mushrooms. The flavors and textures work well together; the succulent vegetables contrast nicely with the saltiness of the creamy sauce. It’s served with a piece of garlic toast and your choice of fries, coleslaw, tzatzike or Greek potatoes, the latter a nice mix of roasted bell peppers and cubed potatoes that’s a good choice if the batch if fresh. The dish is very heavy, so it’s best ordered only when very hungry.

The chicken Souvlaki, a gyro that subs grilled or blackened chicken for the more traditional lamb, sounds good but fails to deliver. The medium-sized strips of poultry were dry, flavorless and too tough to bite into easily. The yogurt-based tzatzike, however, is perfectly flavored with garlic, dill and bits of unpeeled cucumber. Like the gyro meat, it’s outrageously good. Order extra to put a little “Opa!” in each bite.

Don’t pass up dessert, as the tiramisu and galaktoboúreko, lemony custard-filled phyllo that stands 6 inches high, are worth saving room for. So what if they don’t fit into one cuisine category? Greek-American or Italian-Greek, who cares? Either way, Ari’s is delightful.