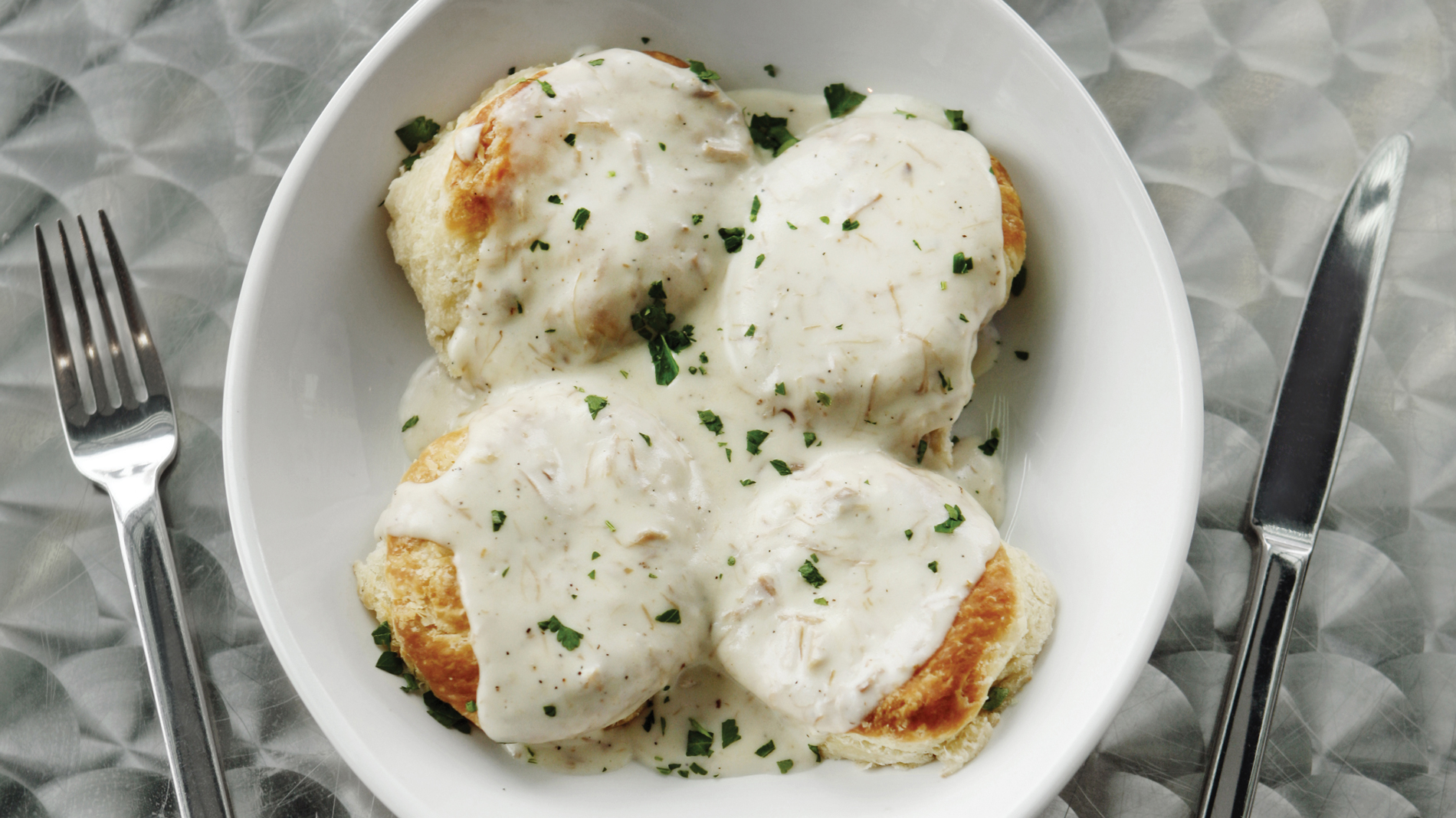 Few things bespeak civility like Sunday brunch, and the metro area boasts a bevy of restaurants to match that meal to your mood – whether you want to bask in tranquility, indulge your sweet tooth or recuperate from Saturday night.

Citygarden, one of St. Louis’ most popular additions of the past year, boasts one of the area’s top restaurants for people-watching, and that restaurant added a Sunday brunch just last month. The Terrace View’s brunch incorporates items from the eatery’s standard menu like soups, salads and various sandwiches. To them it adds intriguing breakfast fare – biscuits and gravy made with duck sausage, for example – and other dishes like smoked-trout salad with a Mediterranean salsa and Turkish eggs, all featuring seasonal, local ingredients. Brunchers inside the modernist glass-and-metal restaurant can sip a pick-me-up from its Bloody Mary bar and observe the panorama of Citygarden’s sculptures, fountains and greenery; in better weather, they can also dine al fresco on the southern patio, enjoying the view of the garden as visitors to downtown and residents stroll through it.

For coffeehouse coziness and a window on the world, Sunday brunchers should visit Sacred Grounds Cafe, on Edwardsville’s picturesque Main Street. The two staples of its brunch menu – the enchiladas and croissant – change each week, said assistant manager Nathalie Woloszyn, who added, “Our Mexican dishes tend to be pretty popular, like our huevos rancheros.” The vegetarian coffee shop also offers similarly variable waffles, pancakes and quiches, as well as scrambled eggs and toast. Recommended when it appears on the bohemian establishment’s chalkboard menu: the cranberry-orange-walnut waffle. Reflecting Sacred Grounds’ hardwood-and-old-brick décor, it comes plated with no razzle-dazzle, no whipped cream or whatnot. But the tang of the whole berries, the notes of the citrus and the crunch of the ground nuts, all covered with just the right amount of maple syrup, make for a fine way to start the day. “That waffle looked good,” remarked a lady at the next table. It was.

Nestled in northern Jefferson County and staffed with waitresses in ruffled maxiskirts who josh a small army of regulars, the Blue Owl should beckon to brunchers seeking to welcome Sunday with a smidge of sugar. Yes, Kimmswick’s best-known attraction plates the staples of a country breakfast, like biscuits and gravy (served not just in full orders but halves, for those who lack the leisure to nap after their visit). It all but demands attention, though, for its sweets, many of which grace a display case at the front of the restaurant. Particularly stupendous: Hawaiian coconut cream pie. To the usual shaved coconut, silken filling and whipped topping, a 4-inch-high wedge of this rich insanity adds fresh banana and chopped macadamia nuts, making a cup of strong java mandatory. Also available to sate a Sunday bruncher’s sweet tooth: noteworthy pastries, cakes and other confections, among them gooey butter cookies and heavenly pecan tartlets.

Someone hoping to start the day sweetly without confectioners’ sugar should make a beeline for Café Osage in the Central West End. In addition to favoring the natural energy of fructose over sucrose, the restaurant within Bowood Farms specializes in cuisine both locally sourced and impeccably wholesome. Granola, oatmeal, and a sampler of muffins and scones all may tempt a bruncher here, in that regard. Our recommendation, though? Go with an order of Café Osage’s berries (perhaps with a side of cheese grits, just because). Recently, one such order comprised juicy blackberries and sectioned strawberries, pleasingly musty blueberries and seedy, semisweet red raspberries, accompanied by a ramekin of subtle orange- and honey-infused yogurt for dipping. Outside, Old Man Winter may be whispering vile things in the sculpted evergreens of the urban garden center, but inside, the serenity of the café, with its sleek woodwork and woven place mats, should leave a bruncher feeling berry … er … very virtuous.

Opulence, thy name is Ritz-Carlton. The Restaurant at the Ritz has long enjoyed a rep as the area’s foremost location for Sunday brunch – understandably so. Its elegantly appointed, cavernous area – all soaring ceilings and windows – houses a spread that’s nothing short of astounding. Craving a well-dished omelet? The Ritz can accommodate you, natch. Or perhaps hungering for … sushi? Certainly! And complimentary Champagne? Of course. The Restaurant also offers an array of desserts of mind-boggling loveliness and lusciousness. One caveat, though. Contemplating a Valentine’s Day weekend walk-in? Don’t. Because of the brunch’s popularity and hours short even by brunch standards, the Ritz strongly recommends reservations for nonhotel guests. Once seated, though, brunchers can bide their time in high style.

For area residents in search of a Sunday bonanza, Grappa Grill, with a spread both extensive and comparatively inexpensive, rewards a visit. A chef staffing a combined omelet and prime-rib station greets patrons to the brunch there. Bracketed by succulent sliced fruit and assorted pastries at one end and such dishes as coconut shrimp, deep-fried frog’s legs and mac and cheese at the other, Grappa Grill’s brunch centers on hearty, stick-to-the-ribs fare that should please any traditionalist. A plate or two of such fare, in fact, can make inclement weather far less woeful: Cheddar-topped eggs like granny used to scramble, flavorful link sausages, bacon fried to a precise degree of crispness and – the pièce de résistance – biscuits just waiting to be ladled with country gravy. In clement weather, meanwhile, brunchers can view the hurly-burly of First Capitol Drive from the spacious patio while sipping a complimentary Mimosa or glass of Champagne.

Even though 15 percent of St. Louisans come from Germanic stock, you’d never guess it from the relative shortage of German restaurants here. The limited reopening of the Bevo Mill should thus cause celebration, especially because the South Side landmark’s Sunday brunch includes such fare. On a recent visit, for instance, the lavish spread featured not only brunch staples like shrimp cocktail, carved prime rib and tilapia, but also slightly peppery schnitzel and bratwurst with sauerkraut. The bratwurst? A knockout. The garlicky sections of grilled beef-pork sausage tasted ineffably robust, and the kraut had a blissful bite – not for the meek. The German fare changes from Sunday to Sunday, so brunchers jonesing for specific dishes – sauerbraten, say, or kartoffelpuffer – should phone ahead, assistant manager Megan Karll advised. Meanwhile, with an admiring glance around the Old World grandeur of August A. Busch Sr.’s windmill-topped wonder, server Scott Guillot remarked, “The place just sells itself.” Indeed it does.

On the far South Side, more or less across the street from the Chippewa Ted Drewes, sits a Turkish delight: Aya Sofia. Sunday brunchers at the compact, elegant eatery can enjoy a late morning or early afternoon in one of its intimate booths, which are framed by reddish-orange sheers and decorated with embroidered throw pillows. Although the menu incorporates American standards like eggs Benedict and oatmeal, visitors oughtn’t waste a chance to sample one or more of owner and chef Mehmet Yildiz’s native dishes, moderately spicy cuisine whose preparation often involves yogurt, garlic and cumin. Such dishes include menemen (eggs scrambled with sautéed tomatoes, onions and red bell peppers, either with or without ground beef), the grilled tavuk (chicken breast) sandwich and peynirli gözleme (melted goat cheese, ricotta and Kasar – a hard sheep-milk cheese – in flatbread), perhaps accompanied with kahve (strong Turkish coffee).

Brunching at Lu Lu requires both fearlessness and fortitude aplenty; it’s a dining experience not for sprinters, but for marathoners. The servers at the dim sum emporium circulate implacably among the glass-topped tables with dish after dish, some as common as scallion pancakes and sticky rice, some much less so – steamed beef tripe, say, and steamed chicken feet. They also trundle carts that tower with single-serving metal canisters of Lu Lu’s signature dumplings. From those carts, notably, the chewy goodness of the pork siu mai contrasts well with the doughiness of the steamed shrimp dumplings (which resemble pink billiard balls and which, because of their size and slipperiness, may confound chopstick novices). The dim sum, dispensed in threes and fours, will make even a card-carrying lone wolf long for a pack; brunch here should be shared with friends. In short order, even Lu Lu’s desserts, like mango pudding (mong guo bo din) or egg-custard tarts (daan tat), can seem like too much of a good thing – till your next visit.

After a rough Saturday night, it may seem not just counterintuitive but suicidal to enjoy Sunday brunch at a brew pub, but the Bottleworks makes that decision a dunker. In addition to unexpectedly healthy fare like fresh fruit, apple crumb cake and the daunting Sunrise Blend – a mix of kamut, bulgur, buckwheat, red rice, quinoa flakes and flax seeds – the Maplewood hot spot’s menu boasts several dishes incorporating eggs and the other usual suspects. Perhaps most tempting: a build-your-own frittata featuring a dozen and a half potential ingredients (cheeses, veggies and meats), plated with diced fried potatoes and a wheat English muffin. In fact, brunch at the Bottleworks (which is also served on Saturday) may rejuvenate you enough to start quaffing Scotch ale, the Saint Louis Brewery’s seasonal for January through April.

The Scottish Arms’ dark woodwork and Old World atmosphere could soothe even a hangover as monstrous as Nessie – perhaps with a little hair-of-the-dog help from the build-your-own Bloody Mary bar, with its plethora of potential ingredients. The cuisine leans toward dishes designed to undercut an evening of overindulgence, including a classic English breakfast with bangers and baked beans. The menu also carries a splendid platter called the Highland Hangover: Scotch eggs (small hard-boiled eggs, encased in pork sausage, flash-fried and then baked); baby bridies (wee beef-filled turnovers); sausage rolls that recall the kiddie classic pig-in-a-blanket; and smoked salmon. Although they may do nothing for the average bruncher’s LDL level, a Scotch egg or two should restore the knife-edged pleats to even the most disheveled kilt.

If you have difficulty rolling out of bed even for a Sunday brunch with the most generous afternoon hours, you can still enjoy an extraordinary meal by visiting Fond for its Farm-Style Supper, served from 5 to 8 p.m. “The whole idea of the Farm-Style Supper is to do home-style cooking, just gourmet, other than what you would do in your own kitchen,” said a representative of the acclaimed Edwardsville eatery. The three-course prix fixe menu varies each Sunday and continues Fond’s emphasis on locally sourced, seasonal cuisine; for instance, one recent meal, served family-style, comprised split-pea soup followed by roasted pork loin, mashed potatoes and braised cabbage, with pecan pie for dessert. As an added attraction, Charles Butler, Fond’s bartender, specializes in cocktails using infused liquors. All in all, the restaurant nicely mixes hominess and sophistication for “brunchers” who can’t make early afternoon, let alone late morning.