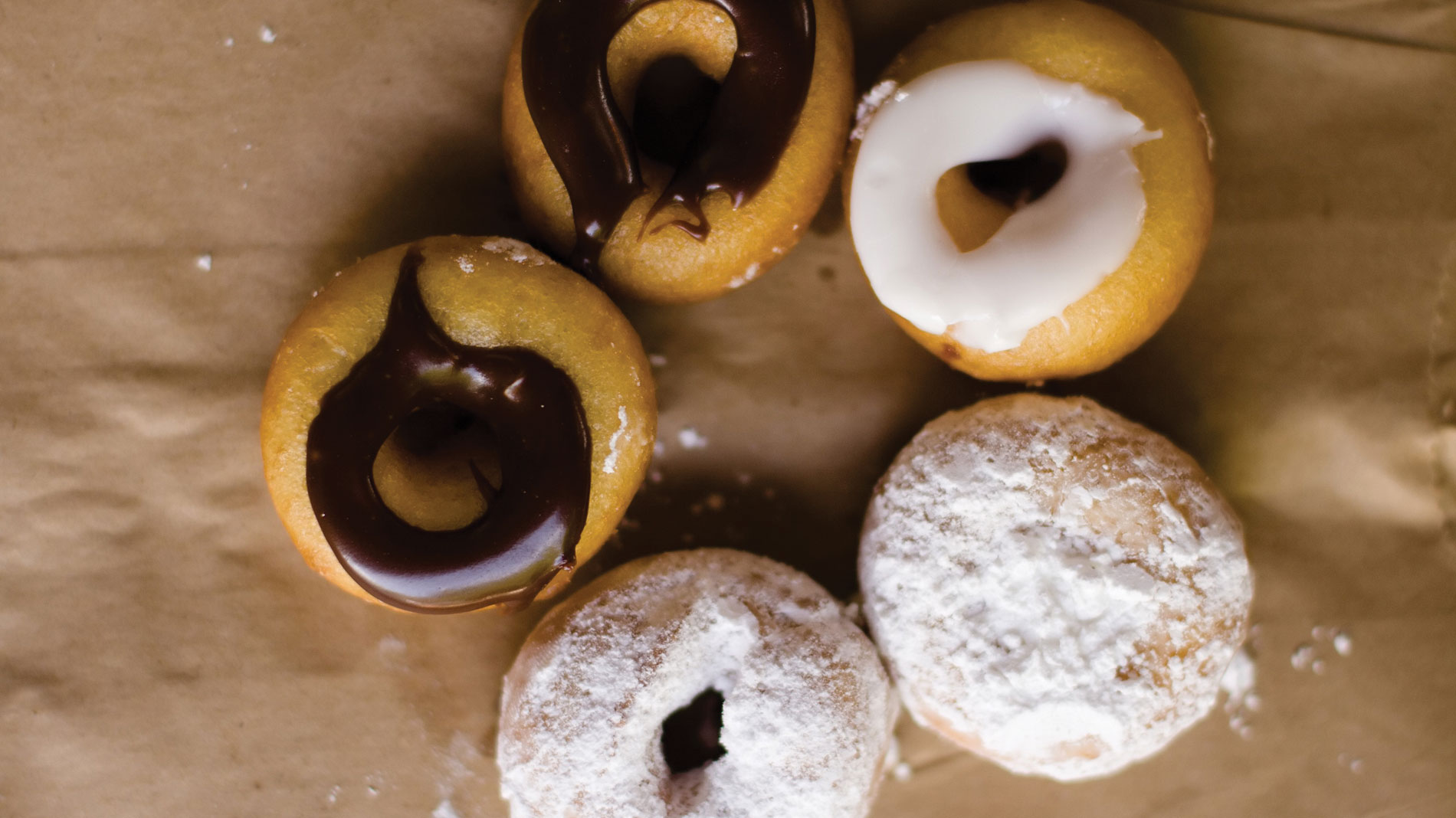 An Eater’s Guide to Soulard Market

There’s just something about drinking a beer while buying your beans or eating a dozen mini doughnuts while haggling for your ham that can make your Saturday a perfect one. Soulard Market not only offers fruits, veggies, fish and eggs, but it also has seven ready-to-eat food vendors, perfect spots for a quick, delicious snack for those in search of a deal.

On the west end of the market sits Joyce’s Corner, home to the quarter-pound frank and other dogs, tamales (with chili), onion rings and beer on tap. (We’d guess that last offering is what makes it one of the most popular stands.) On the opposite end, just outside, sits Peter’s Pork Rinds, a nice snack for those interested in any of the seven flavors available, from bacon-Cheddar to barbecue. The east end is also home to Schmitz’s, the Hawaiian Ice/Gus’ Pretzel/pulled-pork sandwich/beer stand, which features not only those dishes but also the famously unhealthy Pepper Belly (a Fritos Chili Pie), eaten right out of the bag.

Donut Man Stan is likely the most renowned vendor at the market, serving “fresh and tasty mini-donuts ... since 1979.” Watching the machine flip the fried dough is almost better than the oily, sugary treats, available in cinnamon and sugar, chocolate, vanilla, powdered sugar or plain. The Garden Spot Market offers made-to-order $3.50 deli sandwiches, a nice change of pace from the typical to-go fare. Whether you crave pickle and pimento loaf with Cheddar or German bologna with Swiss, this place will satisfy quickly and efficiently.

But for all this variety and convenience, there are two absolute gems here, both of them a bit off the beaten path, away from the produce shopping. One is the northwest corner’s Julia’s Market Café, home to what they call “Soulard’s Best Bloody Mary.” Upon inspection, it is, in fact, pretty tasty. It’s your standard Mary mix poured over a cup of ice and vodka with a leafy celery stalk, but the additional accoutrements take things up a notch: asparagus and house-pickled okra. This combination is not only pretty and cheap ($4), but it adds another layer of flavor to the classic drink.

Also at Julia’s is the red beans and rice, which, again, includes the typical ingredients but goes the extra mile by including green and red bell peppers, well-sautéed celery and okra, and large chunks of spicy andouille sausage. It’s got a kick to it, but the $2 beers for sale assist the consumption process quite nicely.

And for dessert (or breakfast) are New Orleans-style beignets, made to order by the guy off to the side of the trailer. The two large squares of thick, puffy pastry are slightly crispy on the outside, chewy on the inside and served warm under a sprinkle of powdered sugar with a side of strawberries.

The other notable stand is Lona’s Lil Eats, owned by Lona Luo, who hails from a mountainous region of China, and her husband, Pierce Powers, a St. Louis native. Their fare is varied, but centers around Asian-style beef or chicken kabobs, Angus burgers and turkey legs of Medieval festival proportions. The best deal here is the $5 kabob combo meal, which features a large helping of jasmine rice, a seasoned kabob and a Thai salad made from cabbage, carrots, red onion and cilantro. An accompanying peanut-Thai chile-lime-ginger sauce is also offered, but it’s incredibly hot, so use it in moderation. Or just cool off with a homemade Thai iced tea, a sweet drink topped off with half-and-half to give it a smooth, creamy finish.

Dine-In-Ability: All are standing room only, so grab your grub and wander the market or sit at the picnic table patio at the northwest corner of the market.
Feast or Famine: Nothing is particularly healthy, but with such a wide array of options, there’s something for everyone.
Try It, You’ll Like it: Bloody Mary at Julia’s Market, turkey leg at Lona’s, mini doughnuts at Stan’s
Where: Soulard Market, 730 Carroll St., St. Louis, 314.622.4180
When: Market hours: Wed. to Fri. – 8 a.m. to 5 p.m., Sat. – 8 a.m. to 5:30 p.m. (Most food stands open Saturday only.)