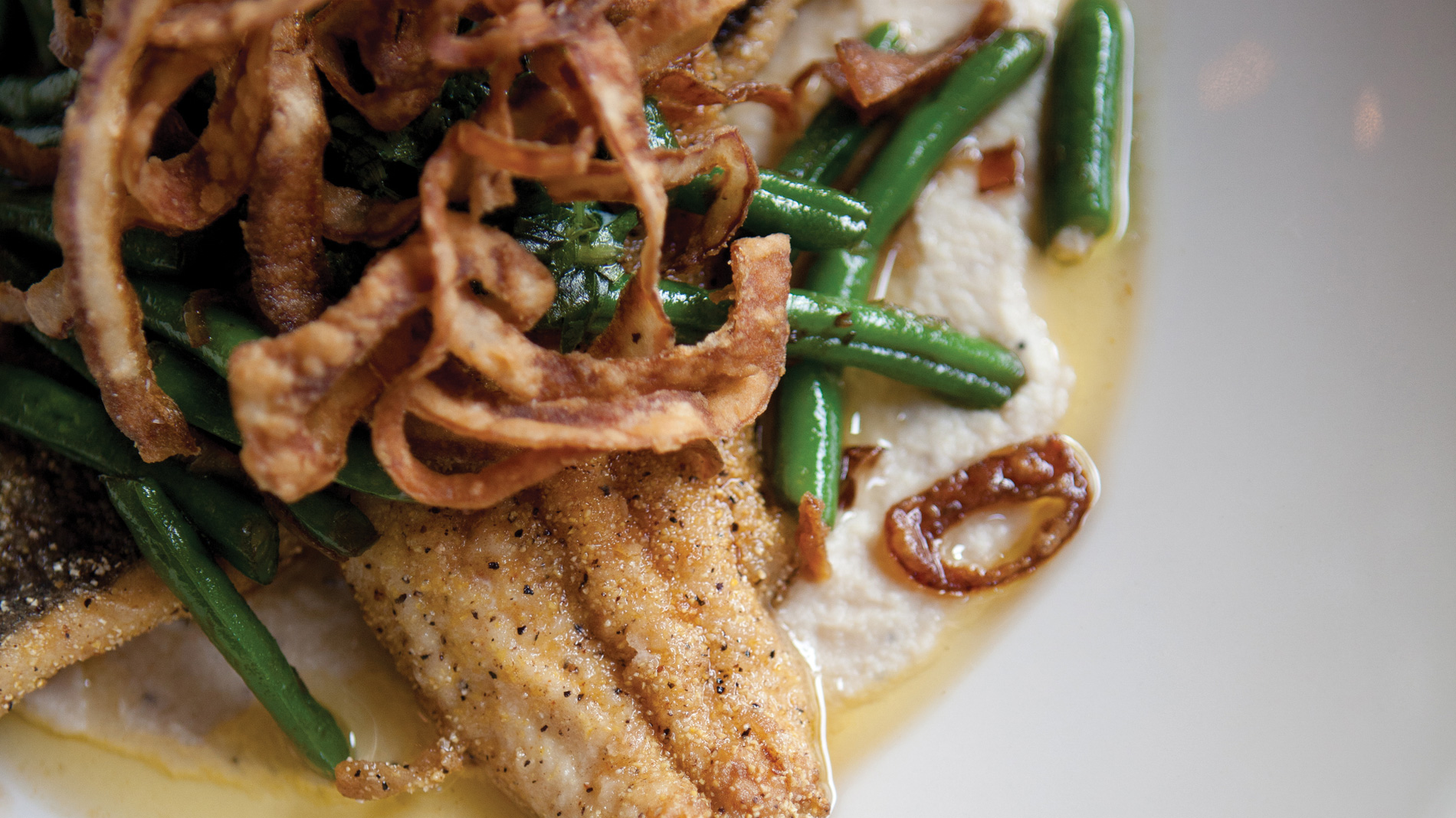 Review: The Block in Webster Groves

If there’s one local restaurant trend that’s not slowing down, it’s meat. It’s as if every chef in town took a course on how to make sausages, cure meats, grind beef, dry-age steaks and butcher a pig from head to hoof. (Actually, several local chefs did take a charcuterie workshop last fall with American Academy of Chefs Hall of Famer Frederic Sonnenschmidt.) In short, we’re rolling in pork belly and bacon jam.

I, for one, am not complaining. All this meat-centric craziness means more restaurants are sourcing their beef locally, procuring heirloom breeds of pork and taking on ambitious new projects in-house. The Block, the new restaurant in Webster Groves by members of the Del Pietro family (Lea Doherty; her husband; her brother, Marc del Pietro; and his wife, Amy, own it.), takes things one step further. Calling itself a “restaurant, butcher and bar,” The Block not only butchers all its own meat (sourced from Rensing Farms in New Douglas, Ill.), it sells it from a small display case prominently located inside the front door, next to the bar. When asked how your steak, burger or chop was, you can now say, “good enough to take home a few.” The quartet also owns Luciano’s Trattoria, but make no mistake: This is American food – sturdy, homey fare prepared with inventive simplicity inspired by the current farmhouse/American larder (or whatever you want to call it) trend.


The South gets a nod with crispy, cornmeal-battered, fried green tomatoes topped with crunchy slaw and blue cheese, the latter overpowering more than complementing. More Southern starters arrive in the form of flatbread. Tonight it’s pulled pork – tender and smoky, drenched in a mild sauce. A dollop of cool, crisp apple slaw provided a crunchy contrast to the pork’s meaty chew. By this time you’ve had sufficient time to scope the entrées. Meat – pork chop, pork steak, beef or burger – seems the logical choice. There’s a massive porterhouse cut available, but rib-eye is always a good place to start. While this one could have been sliced a bit thicker, it was a comfortable size when accompanied by a mushroom gratin loaded with several varieties and topped with grilled scallions. But the schmear of horseradish sauce only distracted from the meaty-mushroomy appeal of the dish. Order it on the side, if need be. A side of garlic, herbed fries seemed in order. Beef from Rensing’s is grass-fed and grain-finished. Consequently, the rib-eye had the best of both worlds: the dense chew and rich flavor that comes with grass-fed cattle and the tender texture and subtle marbling from finishing the animal with grain.

A flank steak, the special during one visit, arrived sliced on the bias and fanned out on a bed of sliced, juicy, ripe tomato. Do this: Mix the steak and tomatoes with the arugula and matchstick fries that come on the side for a superb summer salad. There is a thick, juicy pork chop that would be fine on its own but takes a step into comfort food fare when you add some potato-bacon hash, more of that apple slaw, a douse of sweet mustard pork sauce and a side of corn fritters.

Given all the meat on the menu, you may overlook the fish. Missouri trout is always on the menu, cornmeal-encrusted and pan-seared, but it was the rarity of the walleye special that steered me to order fish. Lightly spiced and pan-seared, this mild freshwater fish came out flaky and succulent, resting on a bed of creamy succotash spiked with big, green fava beans.

Inside, The Block is open and starkly set. Shades of browns and beiges against lustrous woods soften the austere galvanized steel and red girder high ceiling, while flickering Edison lamps further soften the feel. But nothing can dampen the din when a packed room hits high pitch. On weekends, the 80-plus-seat room fills up quickly with early diners from the neighborhood: young families with a child or two in tow; men in Top-Siders, khaki shorts and white Polos; women sporting comfortable summer ware and new tans. But by 8:30 p.m., you practically have the place to yourself.

Beer snobs will harrumph, but most won’t grouse about five of the eight draft brews from Missouri. In the bottled department, those thirsting for a good old Bud or Michelob will sneer (there is Bud Light and Select if you must), while fans of ales and porters will rejoice. But what to make of a wine list that taunts you with interesting wines (some good French whites and reds) and then limits its by-the-glass selection to a mere 15 of the 39 bottles available on my visits? Of the five cabs, one is by the glass. Six “other reds” and only the 2009 Domaine Dupeuble Beaujolais (a very good one at that) is available.

There are clunkers, too. A roasted vegetable soup was too bland, too boring – one of the few times adding salt to a restaurant dish was actually needed. And advertised as vegetarian, it arrived with a lump crab garnish. Good thing no one had seafood allergies. Although the peaches for the pie were unadulterated and fresh, the dough was tasteless. Only the scoop of cinnamon ice cream added some needed punch. Better was the mixed berry cobbler: hot and served in a ramekin, bursting with bright berry flavor. Simple. And who doesn’t like chewy bacon in their milk chocolate ice cream? Don’t knock it until you try it.

On the restaurant’s Facebook page you can watch a video of Chef Marc butchering a hog. It’s fascinating – and just another example of a meat trend that’s gone hog-wild.