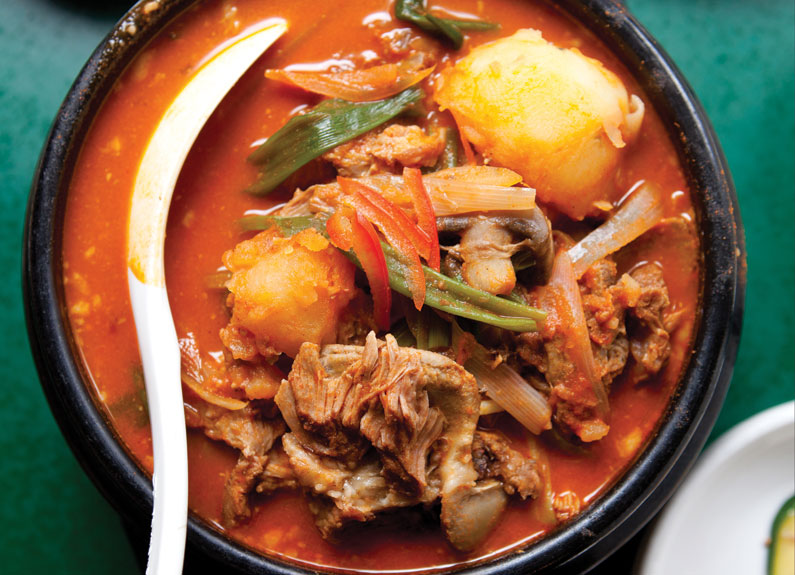 In the back of an unassuming strip mall in the middle of Creve Coeur lies one of St. Louis’ hidden jewels. Reopened by the son of the previous owner (Back then, it was named Hangook Kwan.), Korea House serves up spectacular traditional Korean food.

Though the expansive restaurant spans two decent-sized dining rooms and has spaces for private parties, the quiet décor and relatively simple menu focus diners’ attention on the showmanship of the food and the pleasant attentiveness of the staff. When weather permits, a wide array of flowers and culinary peppers paint the patio garden out front with bright reds, yellows and greens. And next door, a well-stocked Asian market tempts satisfied diners to replicate their favorite dishes at home.

Traditionally, Korean meals include a main dish accompanied by banchan, simple shareable side dishes of house-made pickles, vegetables and other various small plates. But in the United States, banchan are typically served as appetizers, waking up your taste buds with a unique mélange of flavors, textures and colors. Upon ordering, we were dazzled by the array of delicacies available. Kimchi, sweet and spicy pickled celery with jalepeño, fermented black beans with sesame seeds, fish cakes, steamed broccoli with gochujang (a Korean chile paste) and marinated beans were a few of our favorites. Paired with hot Korean tea and a chilled glass of soju (a dry, Korean rice wine similar to premium sake), it was an auspicious start to our evening.

Bibim bob, which translates to “mixed meal,” consists of rice, raw veggies, sliced meat and an egg. At Korea House, the bibim bob touted julienned carrots, zucchini and mung bean sprouts alongside thinly sliced sautéed beef. The whole thing was finished with a beautiful sunny-side-up egg that seductively mingled everything together. For a few cents more, you could order dolsot bibim bob, which means that it’s served in a stone bowl. Do, if for no other reason than the wonderful crust that forms on the bottom of the rice while cooking in the sizzling-hot earthenware bowl.


On a cold winter’s night, the seafood soup hit the spot. Made with a vivid fish stock and sweet tomato paste, it showcased fresh clams, shrimp, diver scallops, mackerel and squid, all married in the bowl with hearty udon noodles. These long, round noodles, traditionally made from wheat flour, brought a starchy richness to the feast.

The pork neck soup was a hearty presentation of spicy, porky broth, stewed potatoes and sautéed mushrooms. It was brightly finished with scallions – and a damn good bowl of soup.

Our son, who loves kimchi, was slightly disappointed by the kimchi stew – too watery, he said. But we found it spicy and elegant; even better the next day. The octopus stir-fry, however, missed the mark, suffering from a chewy, rubbery texture that this sea creature often succumbs to unless prepared just right.

Bulgogi, translated as “fire meat,” is a popular Korean dish of thinly sliced, marinated beef traditionally cooked on a grill. The marinade typically consists of soy sauce, rice wine, sugar or honey, onions, garlic, sesame seeds or oil, peppers, ginger and a slew of other aromatics. It’s as varied as barbecue sauce is in America, which makes sense since bulgogi is often referred to as Korean barbecue. Korea House’s version was served in a piping hot iron skillet that was shaped like a sheep. (Don’t ask us why.) The dish could have used a little more spice to balance the sweetness, but the delicate cut of beef was elegantly prepared and very satisfying.

With fresh ingredients, careful execution and attentive service, Korea House serves up some of the best Korean fare in town. Using tradition as its backbone – and a clear understanding of its customer base as a guide – this hidden gem accommodates American palettes in smart, subtle and delicious fashion.