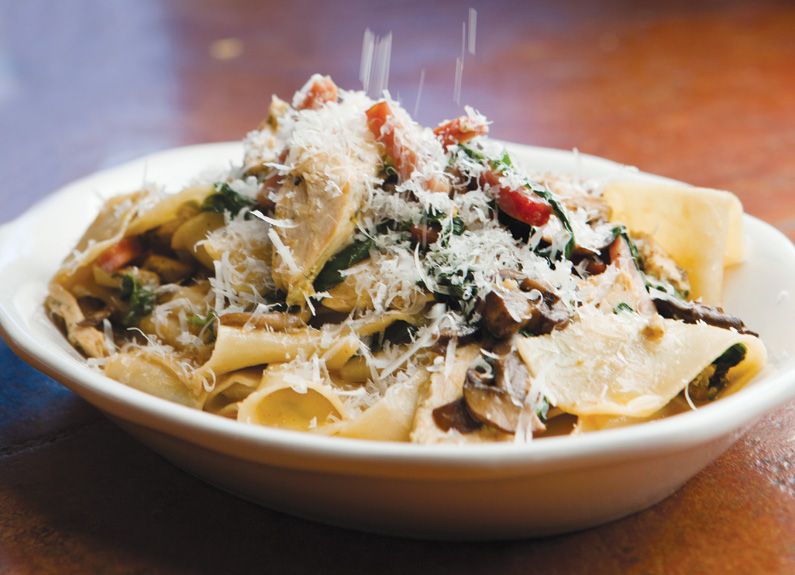 Used to be that cheap Asian buffets, sports bars, pizza joints and chain eateries were as good as it got when it came to West County dining. Sure, there were a few stellar options (Hello, Annie Gunn’s.), but for the most part, foodie suburbanites had to drive 20-plus miles toward the Arch to experience the latest buzz-worthy restaurant. The past few years, however, have seen an explosion of really good eats in West County. Bistro 1130, Veritas, Balaban’s, EdgeWild, among a few, are keeping West Countians close to home and even drawing in those brave adventurers not afraid of driving west of I-270. Now adding to the list of Chesterfield gems is Marcella’s Mia Sorella, a restaurant with roots in the city, just south of The Hill to be exact.

The brothers Komorek have run Trattoria Marcella for 17 years in south St. Louis city. Their signature lobster risotto and fritto misto have been the Siren song for many, including devoted diners motoring in from the western suburbs. The Komoreks (Jamie runs the front of the house; Steve cooks.) are clear about their new venture: Mia Sorella may be Marcella’s sister restaurant, but it’s no twin. You won’t find that risotto or fried calamari on the menu, but the toasted ravioli did manage to migrate west. Usually the bane of most menus, Mia Sorella’s t-ravs are made in-house, filled with shredded – not ground – spiced beef and pork, and served with a vibrant marinara sauce that’s chunky with bright flavor. Tear one of the fried, plump pillows apart, and you’ll find minced carrots and parsley. The order of six was too big for a couple but would be perfect for a party of four or six.

There are other differences, like a smaller wine inventory and greater emphasis on wines by the glass (5-ounce pour), quartino (8.5-ounces) and mezzo litro (17-ounces). Most wines by the bottle are in the $30 range. It’s always a nice touch when you’re undecided and a server says “let me bring you a taste of something.” Peroni is the only beer on tap (Everything else is by the bottle.) and, like sister Marcella, there’s a healthy emphasis on cocktails. Bucking the trend, there’s no wood-fired oven for the pizza, but there is a stone oven that’s just fine for the hand-spun pies. The dough is made with extra-virgin olive oil and a super-soft winter wheat flour imported from Naples, giving the final crisp crust excellent chew. You can build your own or choose from several specialty pies. A roasted garlic crema served as the base for the proscuitto cotto pie, topped with spinach, Gruyere and thin slices of the Italian dry-cured ham for a balanced creamy, salty, meaty mouthful. To the kitchen’s credit, it makes most of the pizza toppings in-house, including meatballs, pancetta and fennel sausage.

There’s a broad selection of pastas, all made in-house. Wide ribbons of pappardelle, bathed in a broth aromatic with roasted garlic and mushrooms, hid tender chunks of white chicken meat and chewy diced prosciutto, making for a satisfying belly-patting meal on a cold winter night. Where many Italian restaurants use frozen cannelloni, Mia Sorella makes its own delicate sheets, rolls them up with tender shreds of braised beef, spinach and Parmigiano before drenching the fat tubes in a thick, red sauce rich with the concentrated flavor of San Marzano tomatoes and a bit of cream. Two to an order, they arrived bubbling hot and steamy with the fragrance of an Italian home kitchen. The bread is baked in-house and has a chewy crust and fluffy interior, but a ramekin of EVOO in addition to the cold slab of butter would have done wonders.

The Komoreks’ version of the classic St. Louis-Italian classic steak modiga is worth pursing, especially if you enjoy cheese, mushrooms and beef with a bit of charred crust to contrast the meatiness and smooth creaminess. Peek under the blanket of melting soft buffalo mozzarella (No provolone or Provel here!) and mushrooms topping the two thick tenderloin medallions – lightly patted with breadcrumbs, charbroiled, fork-tender – and there are thin slices of prosciutto, adding a subtle layer of saltiness and texture. On the other side of the plate sits a huge mound of sun-dried-tomato polenta, creamy and orange but not overpowered by the concentrated earthy sweetness of the tomatoes. In between, grilled asparagus. A douse of roasted garlic-lemon sauce over the meat permeates the entire dish. It’s a big meal that goes beyond the standard starch-vegetable-protein combo, and you’ll probably take half of it home. Ribollita, a hearty Tuscan potage of bread and vegetables, was redolent with garlic and chock-full of cauliflower, carrots, tomato, celery, broccoli raab and white beans, all in a rich vegetable stock – another comforting, warming dish on a cold night.

The servers are experienced and know their stuff, but even the best can be overwhelmed by the onslaught of weekend crowds. Reservations are not accepted, so plan ahead. Chef Steve often makes the rounds table to table checking on diners’ meals. The Italian classic tiramisu was tweaked with diced bananas in the bottom layer of coffee-soaked ladyfingers and the top layer of grated chocolate for even greater contrasting flavor and texture. A subtly flavored butterscotch pudding topped with whipped cream came in a small canning jar. Cute.

Marcella’s Mia Sorella is located in the Ballwin Grove Plaza, amid other new eateries like 6 North Cafe and Circle 7 Ranch, and right up the road from Bistro 1130. It’s a good addition for those not wanting to drive miles and miles east for their Italian fix, unless, of course, they come home for the lobster risotto.

Vibe
Adults with established careers. Casual setting where even the food looks at ease. Painted cement floors and high metal ceiling make for jarring decibel levels in the bar, especially on weekend nights.