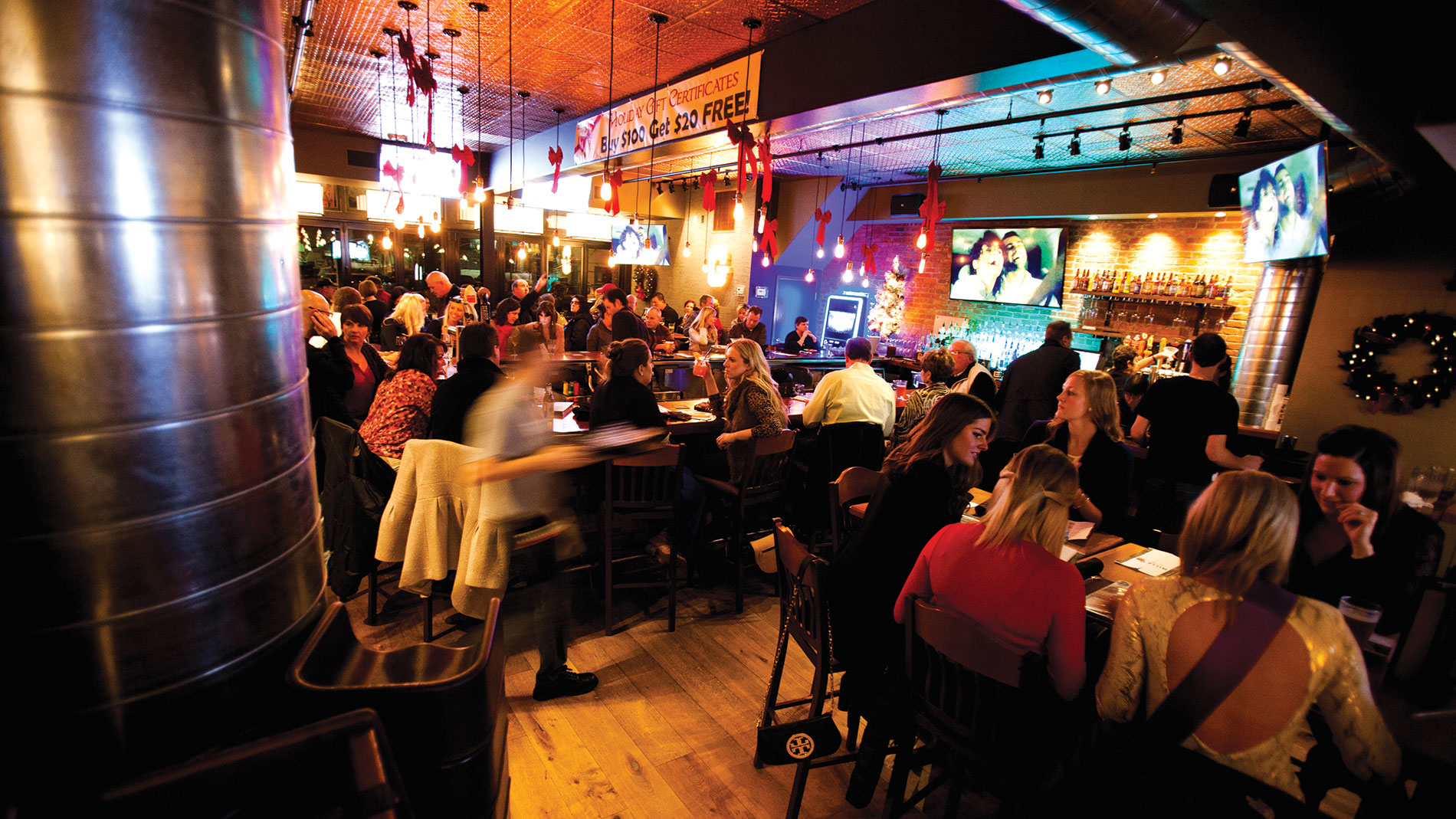 the bar at billy g's in kirkwood photo by jonathan gayman

If the former Italian restaurant Massa’s was an old uncle who sipped Chianti and clung to conventions, its replacement, Billy G’s, is the rascally cousin who slips grain alcohol into the punch bowl. Even on a Wednesday, three bartenders are hustling to sling drinks for crowds two to three deep. It’s worse on weekends when the no-reservations policy (unless you’re with a big group) makes for a perpetually packed house. Fortified by an incredibly well-renovated, smartly stocked bar, the popular new kid on West Argonne is fast becoming a regular haunt for the county crowd.

The Gianino family pulled out all the stops with Billy G’s – its 10th restaurant endeavor. To passers-by, it cuts a fine figure. A supersized patio provides a nifty rock-laden, communal fire pit, flaming torch towers, and plush, all-weather couches and armchairs situated in little nooks where gaggles of friends huddle in scarves and peacoats with bottles of craft beer in hand. The space, located directly across from the Kirkwood Train Station, has undergone substantial reconstructive surgery, stripped down to exposed brick walls and an open kitchen. The front of the house is dominated by a U-shaped bar and a bunch of HD flat-screen TVs perpetually set to sports. The casual, often boisterous atmosphere spills into the dining room – itself a contemporary space with muted wood decor and massive paper light fixtures.

The 10 or so taps stemming from the back wall are mostly local craft brews – Civil Life, 4 Hands, Perennial, Urban Chestnut, O’Fallon and the like – plus another 30 or so bottles – from Scrimshaw to Crispin cider. This I can get used to. It’s almost enough to make me overlook the forgettable and seemingly obligatory offering of martinis thrown into a cocktail menu that could use some streamlining. (I get that fruit chunks are fresh, but, seriously, the world can do without another strawberry-tini.) Exceptions are two signature house cocktails: Blackberry Smash Lemonade, a tart little guy with a healthy wallop of Jack Daniels and a handful of crushed blackberries served up in a mason jar; also worth sampling is Caboose Juice, a fruit punch doused in a mystery liquor that even the bartender kept secret.

Eclectic is a nice way of describing a place that is, more accurately, confused. Billy G’s lives at the intersection of rowdy-yuppie sports bar and family-friendly kitchen. Though it fails to do anything innovative, the menu, like the atmosphere, is impossible to dislike. Seemingly Italian, the food selection is actually a scattershot of upscale comfort dishes, barbecue plates, pseudo-Southern fare, pub food and greasy staples straight from the Hill. You want a Cajun black burger? Sure thing. Scottish salmon? Why not? Greek pita board? Coming right up. While unfocused, the menu is nonetheless appealing to Kirkwood’s upper-middle class, if the crowds bear witness. Though certainly good bar food, even staples such as Caesar salad and eggplant Parmesan were just a shade above average. The shrimp diavolo, the most interesting option on the appetizer menu, was just undercooked prawns bathed in what may as well have been canned marinara.

Where the kitchen does shine, though, is the pizza. For decades, critics have tied St. Louis-style pizza to the whipping post. This will no doubt always be the case, especially for interlopers who detest the lava-like, sugary-sweet Provel cheese and cracker-thin crust. But for its faithful fans, the Gianino’s version will prove to be a crisp yet gooey piece of perfection. Served on a wooden plank, the Deluxe comes stacked high with sausage, pepperoni, mushrooms, onions and thick slices of green pepper. If there’s a gourmet version of St. Louis-style, this pizza certainly qualifies. For the more traditional, the kitchen’s wood-fired, brick pizza oven also pushes out a delectable version of the Margherita with buffalo mozzarella and crushed tomatoes.

Since the opening of Billy G's in August, the staff has become exceptional in juggling the regular onslaught of patrons cramming the bar area and angling for a seat. This problem will likely carry over to the patio, which will, no doubt, be swamped with crowds this spring. So grab a beer. The table is going to be awhile.