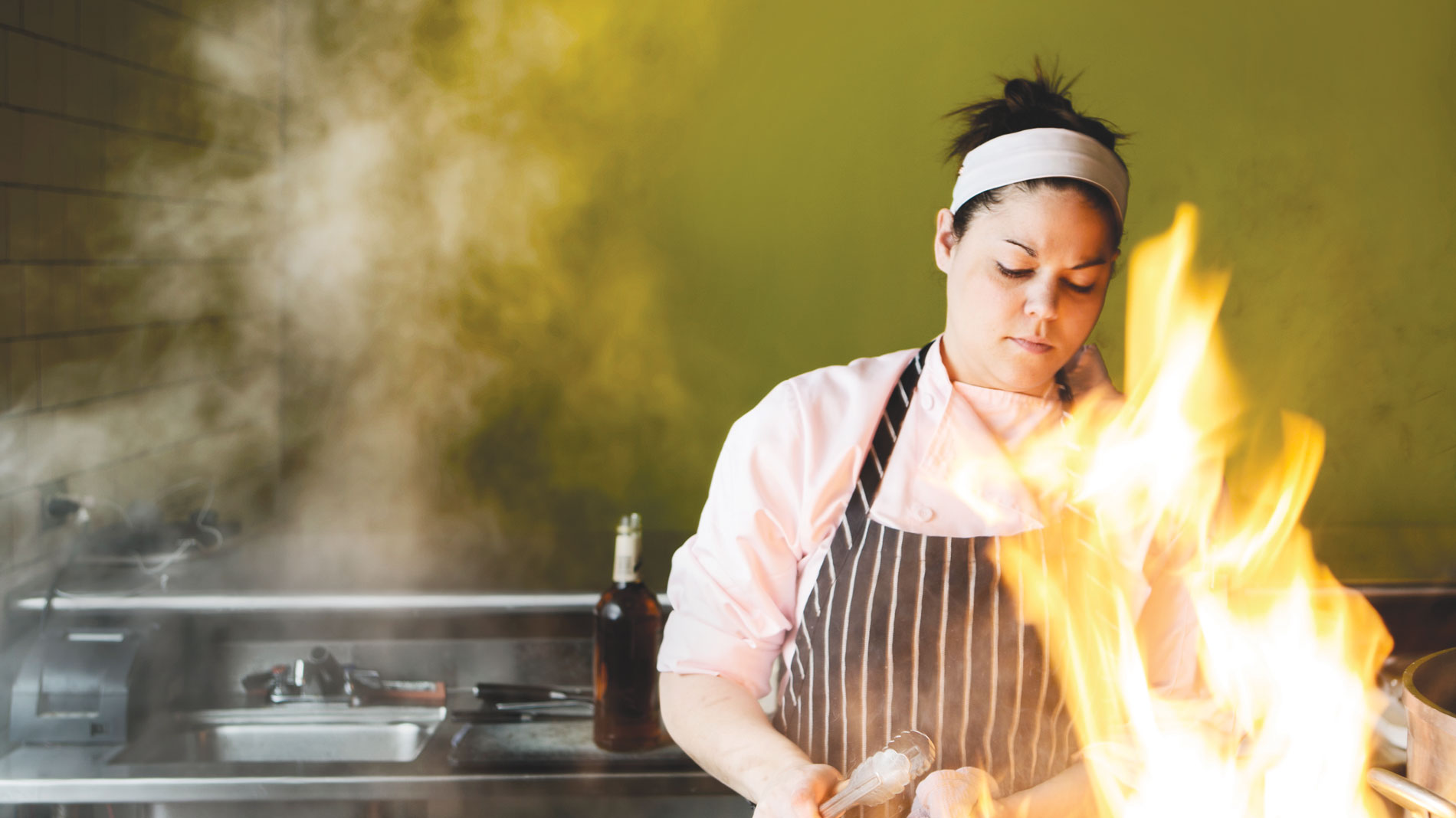 In the middle of dinner service at Cucina Pazzo, the line cooks at the salad station are deep in the weeds, and rapidly making their way onto Jessie Gilroy’s shitlist. It’s just shy of 8:30 p.m. on a Friday, and the kitchen has contended with a relentless press of customers for nearly two hours. A half-dozen skillets of pasta crackle on the industrial-grade range. The roar in the dining room has reached an earsplitting level. In the kitchen, tempers approach their combustion point.

“C’mon, pick it up,” Gilroy barks at the salad line, now several tickets behind. Pazzo’s precocious chef de cuisine then jumps in to help, plating greens, slicing garnishes, peppering everything with croutons. Taking three finished plates at once, she capers her way around the pasta cooks before handing the salads off to the food runner.

The generalissima of Cucina Pazzo’s kitchen is wearing a striped waist apron, untucked chef’s blacks, a pink camouflage headband and a slack, canny expression, as if chewing the end of a cigar. She looks like she’s going to war. In a way, she is – on a busy night like this, the Central West End eatery will serve upward of 200 diners. For Gilroy, who expedites, oversees and fills in where needed on the line, this means approximately 110 appetizers, 50 salads, 70 eclectic pasta dishes, 70 steak or fish or chicken entrees and many hundred slices of complimentary house-made bread must somehow be assembled from Pazzo’s scratch ingredients, then seasoned, sauced and spirited away to hungry customers.

How is it accomplished? “It requires making everyone aware that we’re a family and everyone’s there to help each other,” Gilroy said. “I’ll do anything in the kitchen. I’ll get back there and wash dishes.”

Gilroy has seen her share of menial kitchen work in her ascent through the ranks. After a three-month externship at Charlie Gitto’s on the Hill that turned into a paid position there, she enlisted at Tavern Kitchen & Bar before helping open Cucina Pazzo in late 2013. She didn’t trade the grunt work for a leadership role so much as take on all of it, according to Steven Caravelli, executive chef of OG Hospitality Group, which owns Pazzo, Tavern, The Shack and The Corner Pub & Grill.

“If we roll 500 sheets of pasta a week, she’s rolled about 450 of them,” Caravelli said. “She’s the first one here, the last one out, the one cleaning up the mess and making sure people are cleaning up their messes, too. She runs things the way they’re supposed to be run.”

Every kitchen is a nebula of shouted commands and curses, and here everyone calls things like “heard” and “behind” and “all day” to mitigate the chaos, to streamline. When she’s not filling in somewhere, Gilroy stands at the front, surveying the crowd and the carnage of a good meal. The cooks, food runners and servers all call her “Jessie girl” with unironic deference. They know she won’t stand for attitude.

After working in the restaurant industry since she was 15, Christy Hall ...