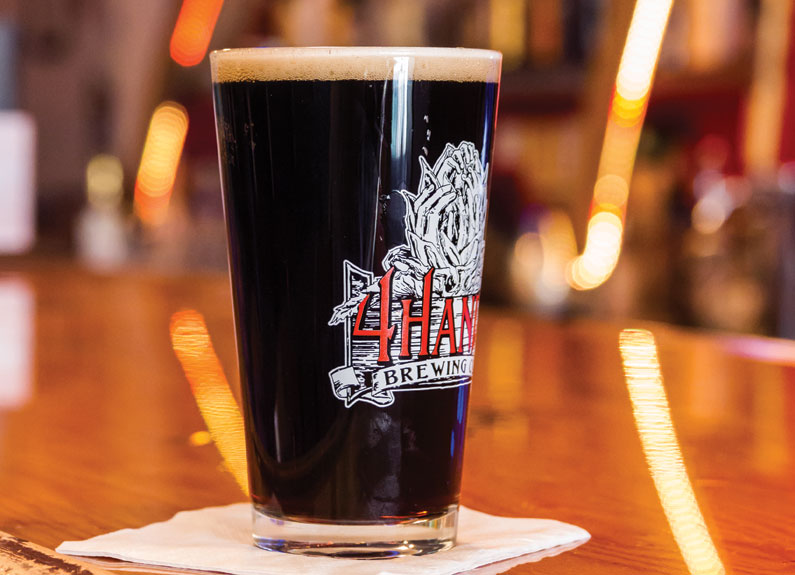 artbar st. louis keeps a rotating supply of local beer on tap, including brews by 4 hands photo by elizabeth maxson

While the many masterpieces from ArtBar St. Louis’ winter food and cocktail lineup have been replaced by a revamped spring menu, given ArtBar’s hits so far, you should make a beeline for one of the funkiest watering holes to spring up in one of the city’s funkiest neighborhoods.

The brainchild of co-owners Tom Halaska and Tatyana Telnikova aims to be both an offbeat saloon and a showcase for all varieties of local art. It hits both marks. Floor-to-ceiling murals stand opposite the massive, multicolored 20-seat bar, the top inlaid with brushes, paints and other artsy knickknacks. There’s art at every turn: a delicate sculpture here, a painting there, black-and-white silent films playing on a TV next to an oversized Darth Vader figurine who is draped in a hug by Kermit the Frog. Walls are adorned with various pieces from local artists over a floor laid with miniature granite flagstones.

ArtBar’s abundant beer menu features drafts from Schlafly, Urban Chestnut and 4 Hands – served on five rotating taps – and a hodgepodge of more than 30 wider-ranging bottles like Scrimshaw Pilsner, Crispin cider, Pacifico and Unibroue La Fin Du Monde. Artisan cocktails rotate roughly every few months, which may be for the best. This winter, some, like the French Inferno, didn’t work – it haphazardly threw together Camus V.S. cognac, Big O ginger liqueur, cinnamon bark syrup and apple juice, topped with a candied ginger garnish. There were a few winners, though: Blume’s Chalice, a light, refreshing take on a Pimm’s Cup, included lavender syrup and a spicy topper of ginger beer. The much stiffer Don Johnston matched a liberal pour of Ford’s Gin with dry curaçao, Luxardo Sangue Morlacco cherry liqueur and grapefruit bitters. It was the best drink the bar served.

ArtBar offers a simple yet accomplished assortment of food. During my visits this winter, it included smoked salmon accompanied with red onions, capers, crostini and a light and zesty Mexican crema, and Russian pelmeni dumplings set afloat in a savory beef broth. Mid-March saw the unveiling of the Kimchi Homie, a spring menu early release featuring G&W knackwurst served in a bahn mi roll and dressed with kimchi, fish sauce ketchup and a dusting of roasted peanut powder and fresh cilantro. An apparent fusion of German and Korean cuisine, the kimchi and other Asian fixings sub for sauerkraut to give the dish a funky, tangy flavor that was a breath of fresh (spring) air.

Like HandleBar, Telnikova’s other eclectic saloon in The Grove, ArtBar is quite simply a fun and happening place to wash away the workday in good company. Offbeat, hip bar-goers sip on Manhattans and sketch in coloring books available behind the bar. The crowd swells with 20- and 30-somethings for such weekly event nights as comedy open mic, burlesque bingo, art openings or WineCraft, which offers three wines, three food courses and an art craft to make and take home for $25. On weekend nights, the bar has become a mainstay for a steady crowd of young, diverse, often zany clientele who appreciate the madcap atmosphere. Expect to see a lot of ironic T-shirts, horn-rimmed glasses and shaggy beards.

It’s easy enough for a bar to host a few art openings, rotate a few locally commissioned portraits, crack open a few bottles, and brand itself as a hip gallery. But on Cherokee Street, where authenticity reigns, any endeavor that lacks something greater than the sum of its parts will soon find itself plagued with empty stools and tumbleweeds. This isn’t the case with ArtBar. This multi-talented newcomer will surely be sticking around.