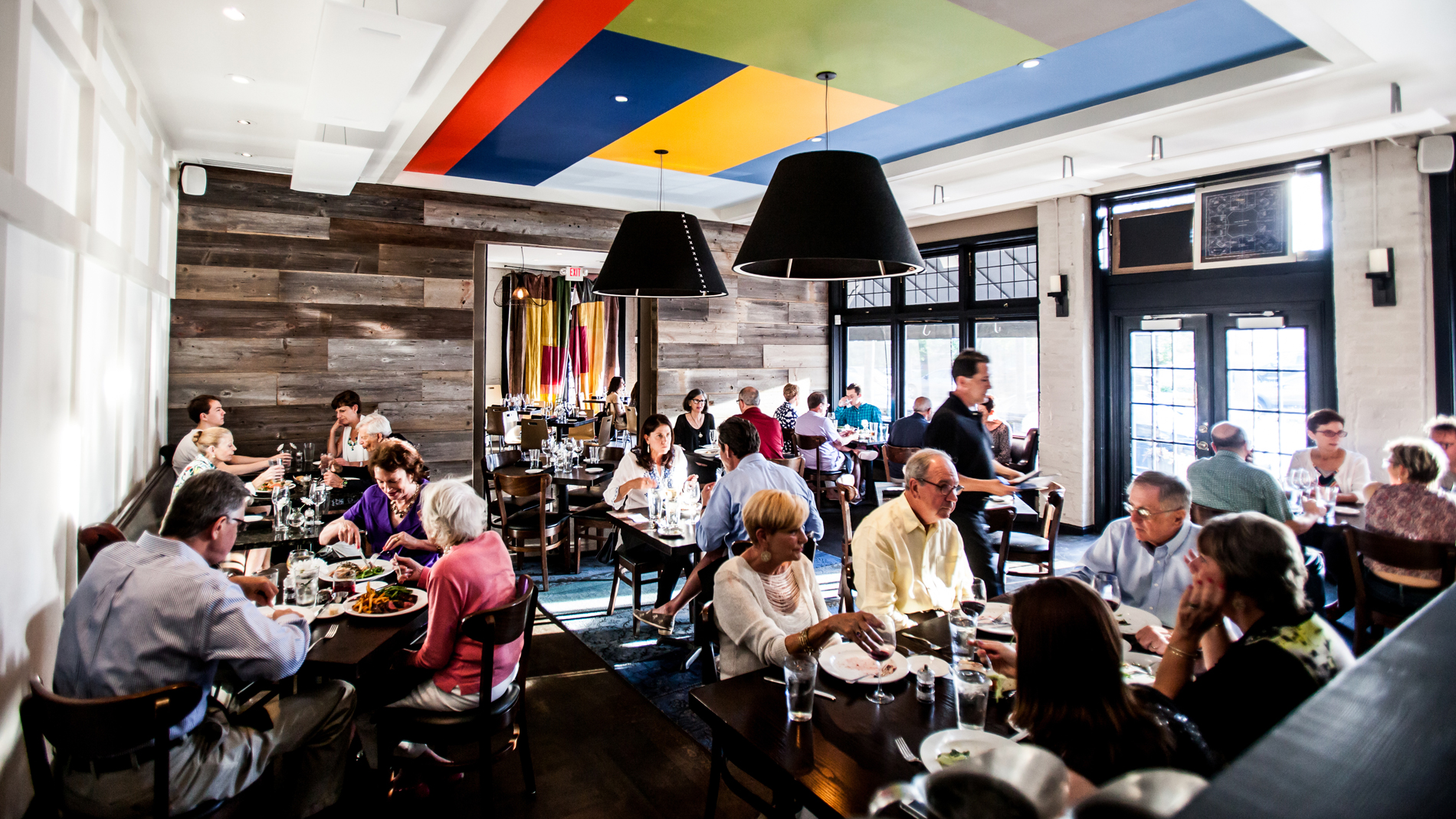 Avoid comparing this restaurant to Bryan and Diane Carr’s other restaurants, I told myself while scanning the menu at Avenue. It would be hard though, since those “other restaurants,” Pomme and Pomme Café & Wine Bar, once shared a Clayton ZIP code with Avenue and canted toward a bistro theme. I certainly shouldn’t compare it to Atlas, the Central West End restaurant they assumed about five years ago when their friends, Michael Roberts and Jean Donnelly, another husband-and-wife team, migrated back to California.

Running three restaurants? I was exhausted just thinking about it. No wonder the chef-husband and manager-wife wanted to consolidate the two Pommes.

It didn’t matter, though. Here I was on Meramec Avenue, just a block over from where those other places used to be, tucking into an appetizer of sauteed wild mushrooms – meaty, chewy, buttery; could fungus taste any better? – scattered over a thick slice of toasted baguette. I spooned some of the accompanying creamy burrata on top of the mushrooms and bread before taking one perfect, earthy bite. It was a good idea to rename the new place, breaking away from the whole French-word-for-apple thing and avoiding branding problems. “What’s the name of that restaurant? PomE? The juice? Pomade? Plum?” Geez, that had to get old.

When I reviewed Pomme 12 years ago, I wrote that chef Bryan Carr was a master at cooking elegant, simple meals that were focused and beautifully presented without all the fancy-pants fuss and fluff. Back then, the gnocchi came in brown butter with ricotta, pine nuts, sage and lemon. Now, house-made burrata – the current darling among restaurants – topped the appetizer of five petite potato dumplings, along with a segment of roasted tomato and sprinkle of chopped basil. The app was gone in a flash. If only the little basket of warm, crusty French bread had shown up before rather than after, I could have sopped up the last bit of delicious buttery sauciness instead of scratching at it with the tines of my fork.

The boneless pork chop was juicy, cooked with fresh lime and sage, and served with plenty of au jus, along with roasted celery, onions, carrots and zucchini. Fish has always been Carr’s strong suit, and the sole and trout at Avenue were no exceptions. The former – two 4-ounce fillets of mild-tasting, lightly floured, sauteed fish placed over a smattering of sauteed asparagus tips, zucchini and halved cherry tomatoes bathed in an understated saffron jus – exemplified Carr’s deceptively simple approach. The classic trout amandine, sauteed in brown butter and served with a sprinkling of almonds, came atop roasted potatoes and sauteed green beans. I ordered a side of the carrot flan, just for old-times sake. The trout, along with eggplant involtini, duck confit and beef short ribs, came from the Pomme Classics portion of the menu (see, I wasn’t the only one reminiscing).

It also paired perfectly with a dry French rosé, just as the white Bordeaux did with the sole and the pinot noir did with the pork chop. But it wasn’t just the selections. It’s that each wine arrived at the proper temperature, a level of attention many restaurants miss. The one drink I will order again next time is the New York Sour, a concoction of bourbon, lemon juice and simple syrup topped with red wine that was as infinitely drinkable as lemonade on a July afternoon.

Another classic Carr carried over from Pomme was weekend brunch, but fans of lazy weekends and those meltingly delicious blueberry-lemon pancakes already know this. What many may not know is that breakfast and lunch are served daily, proving again that the Carrs don’t sleep.

Where Pomme accommodated only a couple dozen diners, Avenue has the space for twice that many. Yet, even with more room, Avenue hasn’t lost the intimacy of its country-French and Italian roots. Civility and comfort are still valued here, from the jazz soundtrack, still playing classic John Coltrane and Miles Davis, to the simple raw wood and white decor to the well-trained staff to Carr’s nightly strolls through the dining room.

Comparing Avenue to Pomme isn’t exactly comparing apples to apples, but very little has been lost in translation during the transition. The reason? Bryan Carr is still in the kitchen.