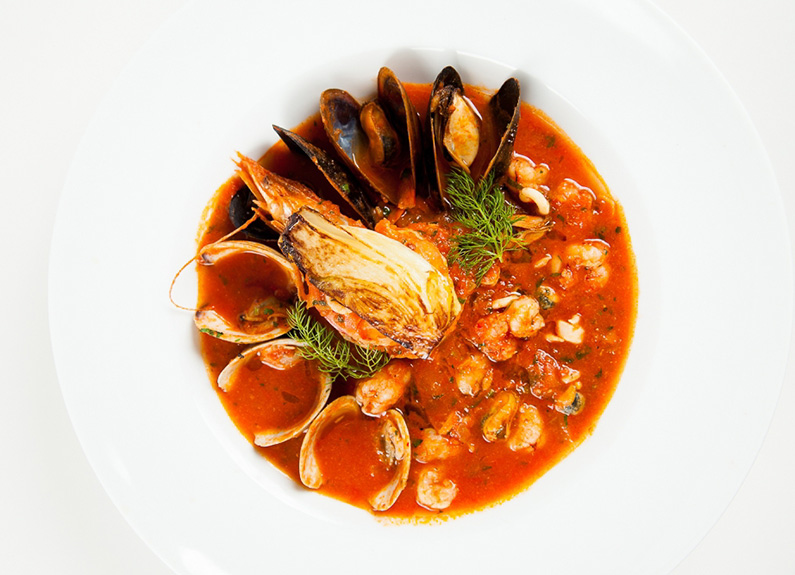 When I overheard a woman at Parigi, Ben Poremba’s swanky new Italian restaurant, say, “I like going someplace that doesn’t feel like I’m in St. Louis,” I knew exactly what she meant. Don’t misunderstand – I like the causal, farm-y decor dominating the local restaurant scene lately: exposed brick walls, repurposed this-and-that, the warm, amber flicker of ubiquitous Edison bulbs suspended from wood beam ceilings. It’s all quite cozy, like soft jeans and a well-worn cotton sweatshirt.


But it’s also nice to dress up sometimes. From the sleek stainless steel-and-white leather divan to the two-seat Louis XV-style settee and chairs, Parigi is a stylish blend of modern Italian design and Old World French ornamentation. And that’s just the entryway.

Parigi is Italian for “Paris,” which explains the French furniture and the French inflection on the Italian menu. Part of this is Poremba’s vision, something there’s no shortage of from the 36-year-old chef, restaurateur and culinary innovator who brought us a renovated old house for high-end dining (Elaia), a 1930s gas station refurbished into a hip wine bar (Olio) and a 19th century police horse stable repurposed as a fried chicken and American whiskey eatery (Old Standard Fried Chicken) all off the same intersection in Botanical Heights.

Executive chef and longtime friend of Poremba, Ramon Cuffie is the other visionary behind Parigi, having perfected regional Italian cuisines during his long stint at Bar Italia before mastering traditional French cooking while living in Avignon, France. Nomadic and largely self-taught, I’ve always thought Cuffie one of the more under-appreciated chefs in town.

Parigi’s dinner menu follows the traditional Italian structure (antipasti, primi, secondi) with the addition of an entire section dedicated to beef (dal macellaio, “from the butcher”) and one for side dishes (contorni). With separate menus for nightly specials, wine and dessert, plotting your evening requires light sustenance from antipasti. Pop a few kalamata and Castelvetrano green olives into your mouth while you strategize, and note the creamy texture and distinctive taste that house-marinating in oil, herbs and lemon brings. Tonno fagioli, a salad of tender heirloom white beans with shaved cured tuna brightened with lemon, would also work. Or the lattuga grigliata, half wedges of charred romaine drizzled with tangy Caesar dressing and topped with Parmesan. A slice of grilled bread with an oil-cured anchovy crowns the deconstructed salad.


Pastas – both hand-cut and extruded in-house – are major players, second only to meat. Slide a fork under a few casarecce noodles to see how their scroll shape grabs the hefty sauce, a heady, not-so-subtle mixture of greens, smoked ham and spicy shredded pork sausage. Spaghetti, bolstered by a light sauce of tomato, garlic, olive oil, butter, cheese and chile flakes, twirled neatly, relaxed but with good bite.

The risotto changes frequently. One night, it was made with squid ink (risotto noir, if you will) and topped with thin slices of squid, the white flesh masquerading as mozzarella. The jet-black rice had a proper, creamy consistency and the ink imparted a delicate salinity, though the black pepper threatened to overwhelm.

At this point you may be wondering when the French touch comes in. Think sauces. There’s nothing especially remarkable about a roasted chicken breast, but set in a silky, creamy, butter-rich foie gras sauce, the elegant influence of French technique and attention to detail could be tasted. Slicing through the coppery, crisp skin of the frenched breast allowed the juices to escape and mix with the fragrant sauce. Its simplicity was its sophistication. The chicken was roasted in an oven, a server explained, because that’s how Cuffie cooks: no fancy sous vide device, CVap ovens or other gadgets.

Brodetto, a tomato-based fish stew popular along Italy’s Adriatic coast, was a picture-perfect bowl of snow-white fish, clams, mussels and head-on shrimp in a broth redolent with red wine vinegar and lemon zest. Like gumbo and bouillabaisse, Italian cooks from different regions have their own views about how to make brodetto. I don’t know from which region Cuffie draws inspiration, but I delved into his brodetto and did not come up for air until each shell was picked clean and every drop of the intoxicating broth was sopped up with the accompanying yeasty, crusty bread.

Desserts on display in a case came from La Patisserie Chouquette, the French pastry shop Poremba co-owns across the street from Olio. The olive oil cake was sumptuously rich. Almond cream frangipan (sic, fittingly – Italian frangipani and French frangipane) was as velvety as it sounds.

Inhabiting the former Finale space inside the high-end apartment high-rise Clayton on the Park, Parigi is Poremba’s biggest venture. While all his restaurants project vastly different vibes, they all share Poremba’s exquisite sense of design. A stunning chandelier in the private dining area consists of teardrop-shaped “netting” laced with hundreds of shimmering crystals. The pumpkin-orange banquette and booths, a bartender pointed out, are the same color once used in Ferraris. Only a banquette divides the bar and open dining room, but it’s remarkably quiet compared to most restaurants, making Parigi indeed feel like it's somewhere other than St. Louis. Sometimes wool slacks and a cashmere jacket feel just right.