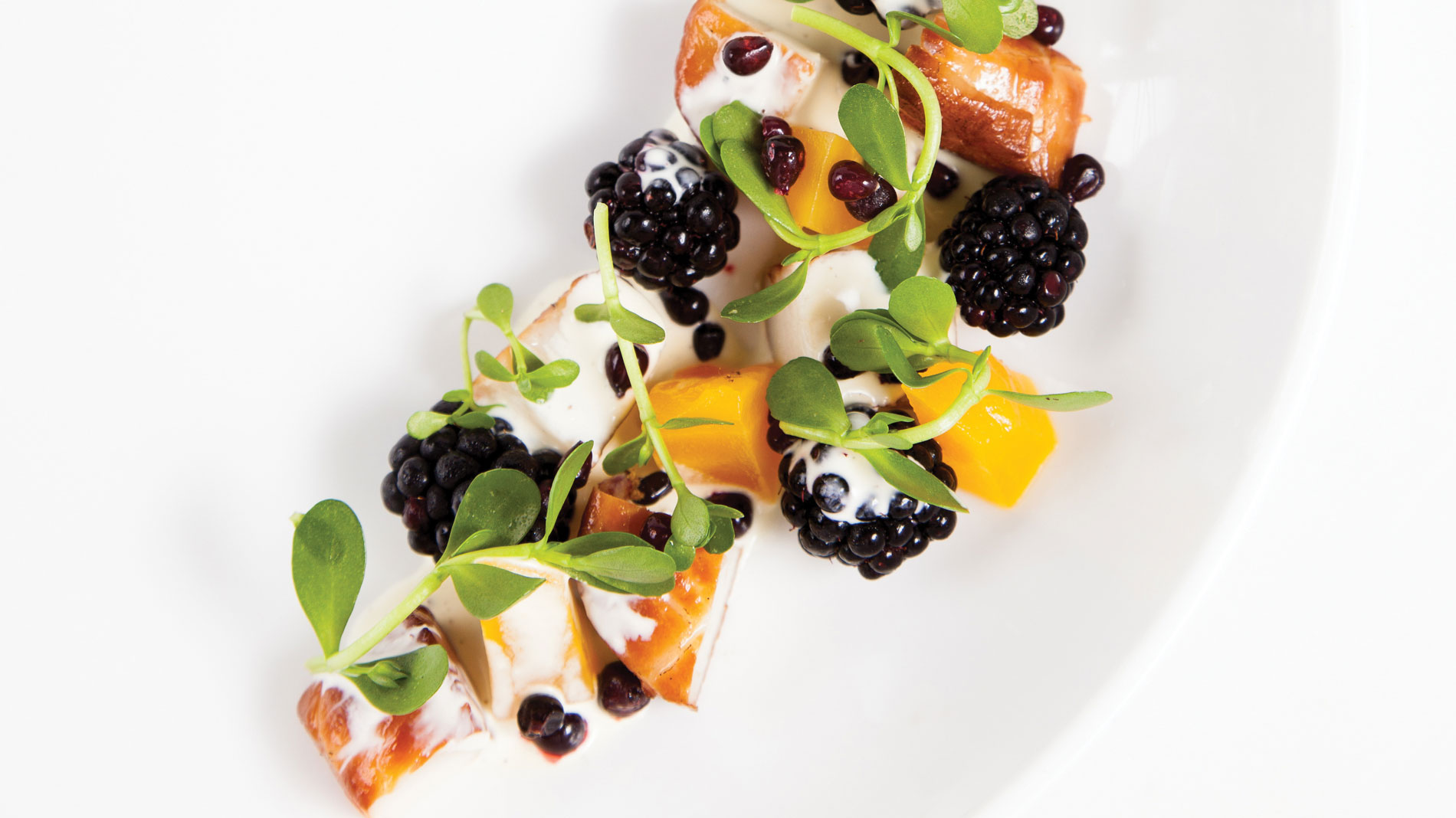 The night of a heat advisory probably wasn’t the best time for hot soup, but there I was, uncontrollably slurping my way through a big bowl of steaming broth and noodles at chef Chris Bork’s hotly anticipated first restaurant, Vista Ramen. A solo diner next to me was bent over his piping bowl with the focus and reverence of a yoga master, inhaling deeply before picking it up to examine the contents, then nodding in approval. A row of diners lining the tightly spaced bar quietly worked their spoons and chopsticks, stopping only for air and praise.

Bork is best known for his stint as executive chef of Blood & Sand. For his first venture as co-owner, he’s partnered with Casey and Jeremy Miller of The Mud House, where he also once worked as executive chef. The team created a focused menu of four ramens, 10 small plates, a few sides and four desserts, plus a couple nightly specials.

Despite its moniker, I wouldn’t call Vista Ramen a noodle house or ramen restaurant – though it is where I’m going for ramen from now on. The signature Vista ramen featured braised pork, a sous vide egg, ginger, scallion, nori and sesame in a broth so complex and addictively slurpable, I needed to know what went into it. When pressed, the manager explained it begins with a dashi base made with water, kombu and mushrooms, used in all Vista’s ramen. For the signature ramen, Bork layers in smoked ham hock, chicken feet and Granny Smith apples, simmering it all for at least 12 hours, resulting in a surprisingly light, clean-tasting broth. The chunk of fork-tender pork shoulder – cured and then braised in a mixture of stock, mirin, miso, sake and soy contributed another complex layer of flavor and texture.

The same base goes in the pozole ramen, but amped up with a shot of ancho chile paste for a deeper hue and subtle smokiness to which pulled chicken, hominy and that creamy sous vide egg are added. The veggie ramen, served with cauliflower, shiitake mushrooms and carrots on my visit, elicited the most surprise. The ramen’s deep and funky umami is built simply from the mushroom dashi base bolstered with roasted veggies including eggplant, beets and turnips for a finished product so rich, it seemed more like a liqueur than broth.

Menu descriptions did nothing to convey the excitement elicited by a plate of warm corn pudding in a pool of corn dashi, topped with smoked kernels of local sweet corn and halved sungold tomatoes. A tersely described stack of five pork ribs proved ridiculously intoxicating – cooked at a low temperature then fried to a yielding yet crispy chew and coated with crab caramel (a caramelized fish sauce with crab paste), crushed peanuts and fresh herbs for a sweet and fragrant crunch. The Korean fried chicken – I’m calling them sliders – made the perfect snack: three bites of deep-fried, moist meat snuggled between a house-baked Hawaiian roll with thin-sliced fish sauce pickles. A final douse of gochujang-based sauce provided the spicy, dry heat.

I wanted more kick from the kimchi pancakes. Three thin griddled cakes came topped with light and creamy coleslaw, slivered scallions and dollops of house-made hoisin sauce. I hoped for a more discernable fermented funk from the kimchi in the batter.

Take the specials seriously. One night it was a beautiful, meticulously prepared plate of cubed cantaloupe and bright yellow watermelon, each topped with paper-thin slices of ginger, a chanterelle mushroom, crispy shreds of fried ham hock and a few drops of a brown-butter vinaigrette. Every juicy bite was full of contrasting textures and salty zing.

The sleek interior of Vista Ramen is as concise as its menu. With only 34 seats and the square footage of a large dollhouse, the long, shallow space can feel tight. During my visits, though, I found the close crowd more convivial than territorial.

The drink list is succinct with four house cocktails, a small selection of spritzes, Japanese teas, sake, reasonably priced wines ($7 to $11), beer and Japanese whiskeys. Of the cocktails, the Matcha Gonna Do For Me? seemed to be on every table, and for beer, the short-lived 4 Hands Preserved Lemon Gose paired particularly well with ramen.

Far from an afterthought, desserts were granted the same focus and precision as the rest of the menu. House lemongrass-basil ice cream was simple and light enough, but a little thing like three quarter-sized house-baked ginger snap cookies made a big difference. Summer peaches, poached and served over shortbread, got a mouth-puckering, eye-squinting blast of tartness from a scoop of Champagne sorbet. However, it was the salted honey panna cotta and watermelon dessert that provoked the most vocal approval: sweet, ruby red cubes of melon on a pillow of perfectly firm but creamy panna cotta surrounded by watermelon granita. While the house-made graham crackers were a bit too thick, it was easily the best dessert I had this summer. A special on my visit, the manager said they were considering keeping it on the menu for the remainder of the season. Later, a diner extolling his love of the ephemeral dessert cornered that poor manager, lobbying him to do just that. The dish is now a regular dessert menu item.

That’s the kind of passion Vista Ramen elicits, even when it’s 102 degrees.

Vibe
Fun – filled with laughter, chatter and an eclectic soundtrack ranging from the B-52s to Fela Kuti