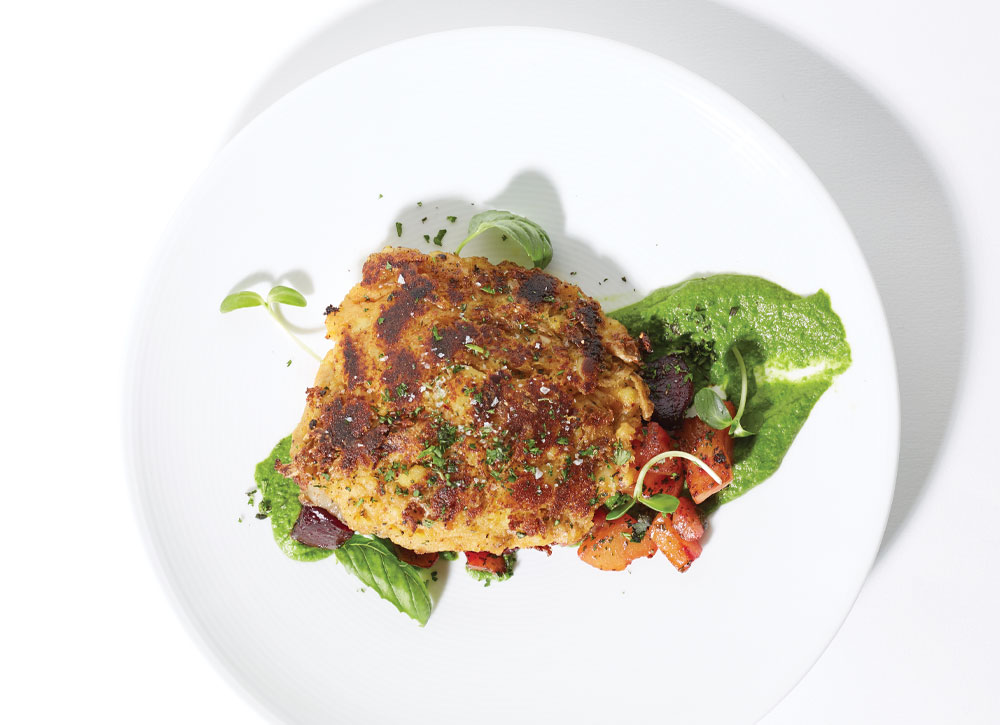 I remember Jessie Gilroy as the badass in Cucina Pazzo’s open kitchen – slinging pans over plumes of fire, barking commands to line cooks and jumping in to help. That was back when I reviewed the place in 2014. The then-28-year-old Gilroy was chef de cuisine when she made Sauce’s 2015 Ones to Watch list. Now, she’s taking over the world at Pangea – her own restaurant named for the ancient landmass that split into our seven continents 200 million years ago.

Before being offered a space in “downtown” New Town at St. Charles, Gilroy was sous chef at Sidney Street Cafe – a nice gig for the kid who preferred studying food in Hawaii rather than finishing college there, attended Le Cordon Bleu in Miami and worked her tail off at Charlie Gitto’s on The Hill before impressing herself upon the group behind The Tavern and Cucina Pazzo.

Pangea debuted in September, tucked away in the corner of a square anchored by a sand volleyball court amongst the stage set-feeling New Town’s many artificial canals and lakes. The space conveys a casual, if mishmashed, approachability. Sage green walls adorned with contemporary artwork and light oak tables set with striped bistro napkins hang on a spare, semi-open design (sealed cement floor, high ceiling, exposed ductwork) that looks more urban loft than exurban tract house. Large windows mimic the four-pane farmhouse style, which seems incongruent with the rest of the design.

It may feel like a suburban bistro, but with Gilroy in charge, Pangea has the kitchen of a sophisticated white-tablecloth restaurant – a refreshing alternative to New Town’s burger-and-pizza eateries. As the name implies, Gilroy’s approach is decidedly eclectic, incorporating different flavors and techniques.

To wit, her ricotta gnudi appetizer brought together the earthy richness of little cheese dumplings, perfectly fried and gilded in brown butter with petite diced roasted squash and leeks accented by aromatic fresh herbs, all of which came from a local farm.

Bone marrow tart, which sounds like something served to English kings alongside stag’s tongue and partridge pie, proved just as rich. Cream, eggs, marrow, rosemary and preserved lemon were baked in a pastry shell to a delectable texture so uniform it was difficult to discern where the pastry ended and filling began.

It’s a rare thing to say as a restaurant reviewer, but everything I ate at Pangea was interesting – even the house salad. The greens were fresh and lush, topped with crunchy sunflower seeds, chewy and sweet dried cherries and an aromatic roasted garlic vinaigrette, applied lightly. But the subtle texture and taste of paper-thin sliced carrots, zucchini and squash made this salad easily the best I’ve had in months. Unfortunately, on a subsequent visit, the greens were watery, faded and drenched with dressing. A small, but surprising, flub excused by several superb entrees – like the beef cheeks. Meaty chunks were braised until fall-apart tender, sunk into a soft bed of creamy polenta and topped with braised greens drizzled with mustard cream sauce for a comforting cold-weather meal.

The coffee-crusted local pork best represented Gilroy’s eclectic approach. Gilroy gets her pork from a local farmer and breaks down whole hogs before turning them into this and other menu items. Dry rubbing meat with ground coffee and other spices is a common technique for adding depth of flavor that oddly doesn’t taste like coffee. If saucing the pork with red Thai curry seemed risky, its spicy-sweet brightness only complemented the rub’s earthy tone and didn’t compete with the bed of roasted potatoes and topping of sauteed Asian greens.

While the mushroom risotto was a standout – a bowl of perfectly creamy arborio rice chock-full of thick, meaty oyster and shiitake mushrooms – the potato-crusted flounder was the star. First, the mild fish was supremely fresh, pan-fried golden and flaky without losing its potato jacket in the process. Second, where any number of sides would have worked, pairing the fish with roasted beets on little pillows of pea-and-herb puree played just right. An orange vinaigrette finish served as an exclamation point.

Desserts included a couple fun options served in little canning jars. Mexican chocolate budino – rich, creamy and custardy – got a gentle heat from the addition of ancho chile. Chocolate crumbs brought back memories of the little clumps of Nesquik floating in hot chocolate. The only thing to say about the apple pie in a jar is you can’t go wrong with a snickerdoodle crust and Chantilly cream. Prefer dessert on a plate? Though a bit drier than expected, a slice of the lightly sweet almond macaroon cake satisfied on one of my visits, especially on a bed of buttercream, topped with macerated strawberries and laced with a citrus gel.

Pangea does a chef’s choice No Menu Monday consisting of three courses; brunch was recently added, as well. I hope New Towners take advantage, because people were not exactly clamoring for one of the 74 seats during my weekend visits. If so, they’ll find big flavors in their own backyard. For those who don’t live near St. Charles, getting to Pangea may feel like traveling to the end of the continent. Once there, though, you’ll find an approachable restaurant that’s serious about what it serves.

AT A GLANCE
Pangea

Vibe
New Town may look like “The Truman Show,” but Pangea’s staff exude a genuine warmness of spirit.