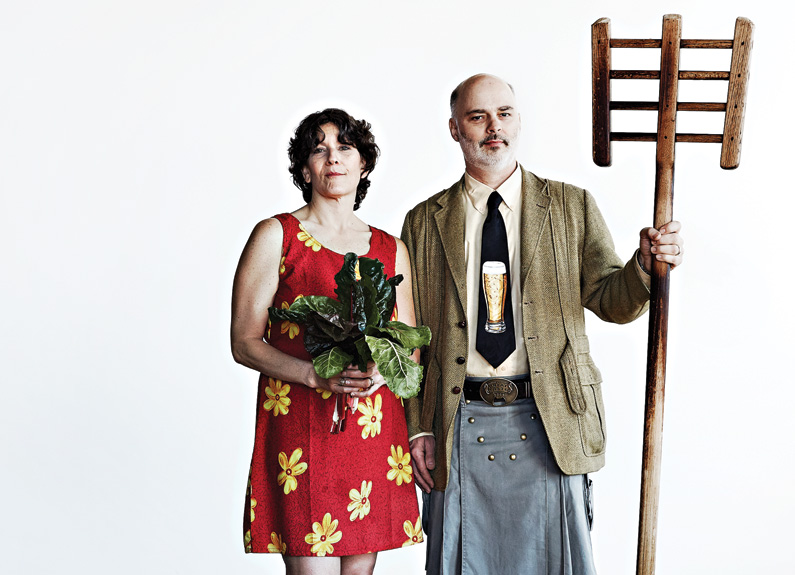 What I Do: Stephen and Sara Hale of Schlafly Beer

“It was love at first sip,” said Stephen Hale, recalling the day in 1991 when The Tap Room opened, and he handed a brunette named Sara her first Schlafly beer. The couple eventually married, and Schlafly’s former utility girl – she’s worked as a brewer, hostess and manager of the brewery’s art department and design group – now operates Fair Shares, a community-supported agriculture (CSA) she started in 2008. Meanwhile, her utility kilt-wearing husband recently transitioned from his job as chief brewer at The Tap Room to Schlafly’s ambassador brewer. Here, the Hales share tales from careers rich in beer, food and curious clothing.

How did you get hired at Schlafly?
Stephen: I moved here from Maine. I got a phone call from [Schlafly co-founder] Dan Kopman asking if I’d like to work as assistant brewer. I drove down here sight unseen in October of ’91 – fortunately, after the major heat wave. I looked with increasing horror at the weather and said, “What am I doing?”

Now that you’re an ambassador brewer, how much do you brew these days?
Stephen: I am not hands-on brewing. Basically, I get a beer in my hand, and I go shoot my mouth off about Schlafly beer and hope everybody likes it and buys more beer.
Sara: How did they ever think of you for that job?

Why did you start Fair Shares?
Sara: My sister Jamie Choler, who is my co-partner in Fair Shares, and Stephen and I shared a CSA. We loved it. The CSA ends and we’re like, “What are we going to eat?” I’d gotten to know a number of the farmers. I knew a lot of them had food. [A farmer] once came in December and sold me a bunch of food. He came to my house, and I felt like I was doing a drug deal: “Give me some food. I know you’ve got it.” We started thinking we could do something that lasts longer. We could include meat and cheese and eggs, and all that other stuff we go to the market for.

Give me the Fair Shares sales pitch.
Sara: We’re a combined CSA. We source locally produced foods from small producers and farmers for families in St. Louis.
Stephen: Bring a farmers market to me every week for 46 weeks.

How many employees are there?
Stephen: Six. I’m the only in-volunteer. The reason I’m with Fair Shares is because I sleep with the president, I like to eat, and I have a pickup truck.

The same thing is happening with beer.
Stephen: The most recent example is the Chestnut Mild that we brewed in collaboration with Gerard and Suzie Craft. Gerard and his team took 200 pounds of chestnuts. They were roasted at Niche, brought to The Tap Room, run through a grinder and added to the mash.

How many Schlafly beer recipes are yours?
Stephen: I have a handful. Sara has a handful. It’s a team effort. Many of the brewers have created their wedding beers. Ours was Vienna, and Sara did it all.
Sara: That’s where the term “bridal” comes from. It’s the “bride’s ale.” Women were the brewsters. The Vienna, that’s my favorite beer style.
Stephen: It’s the Vienna that’s at Gringo now.

Do you wear a kilt every day?
Stephen: Effectively, yes. Do you want to see the sarongs?