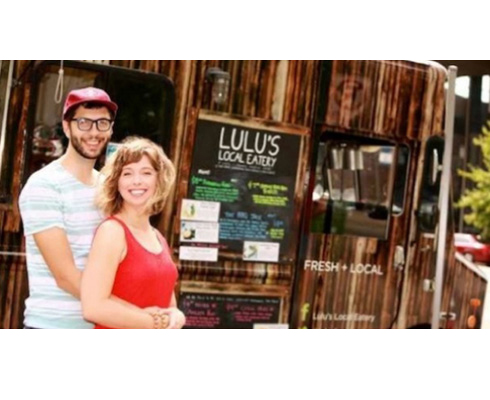 The Scoop: Lulu’s Local Eatery to open a brick and mortar on South Grand

Vegetarian food truck Lulu’s Local Eatery is getting a permanent home. Earlier this week, owners Robbie Tucker and Lauren Loomis, aka Lulu, signed the lease on the space at 3201 S. Grand Blvd., recently vacated by Natty’s Pizza. Natty’s is joining forces with and moving its operation to nearby Plaza Cafe and Grill at 3182 Morgan Ford Road.

Tucker and Loomis hope to open their restaurant in early May since the 42-seat space needs only minor improvements and cosmetic changes. The pair is designing the space themselves, and Tucker noted that sustainability will be a focus at the restaurant, just as it is with Lulu’s Green Dining Alliance-certified food truck and the organic, from-scratch dishes that they offer. Among design elements, they hope to build a living herb wall and a raised vegetable bed in the 32-seat patio.

The restaurant will be fast-casual; customers will order at the counter, but servers will deliver food to their tables. Loomis and Tucker expect this service model to result in a wait time of less than 10 minutes. Lulu’s will offer lunch and dinner, as well as brunch on weekends. The menu will be “a continuation of what we are serving on the food truck,” said Loomis, noting that the brick-and-mortar restaurant will offer additional items not available from the food truck.

In addition, it will offer wine and beer – both on tap and in bottles – with special attention to local brews. “Robbie is super-passionate about local craft beer,” Loomis said.

“I want to make it the place to come have a beer in St. Louis,” Tucker added, saying he envisioned Lulu’s patio as a spot for a relaxing drink during warm weather months.

Lulu’s rolled onto streets in April 2012, and the owners say the truck will still roll the streets as they prepare the South Grand space. Tucker and Loomis said they have been looking for a permanent home for Lulu’s since June 2013. They settled on the South Grand business district because “we are so passionate about South City,” Loomis said. “We live in South City. We moved from Chicago to be in South City.”

The former Natty’s space was an ideal spot for their needs. “We love the patio seating capability and the logistics of running the food truck as well,” she said, noting that the proximity to Tower Grove Park will be helpful when participating in events such as the Tower Grover Farmers Market and Sauce-sponsored Food Truck Friday.

As for Natty’s Pizza, owner Brian Williams said he is teaming up with Plaza Cafe and Grill owner Todd Alexander. Williams will helm the pizza-making operation, while Plaza Cafe’s current culinary crew will prepare the other menu items already offered at the restaurant. Williams expects pizza-tossing to commence there in two weeks and said those familiar with Natty’s pies will notice an expansion into “artisanal pizzas.” I’m going to expand on what I was doing at Natty’s, but push the envelope a little more,” Williams said.