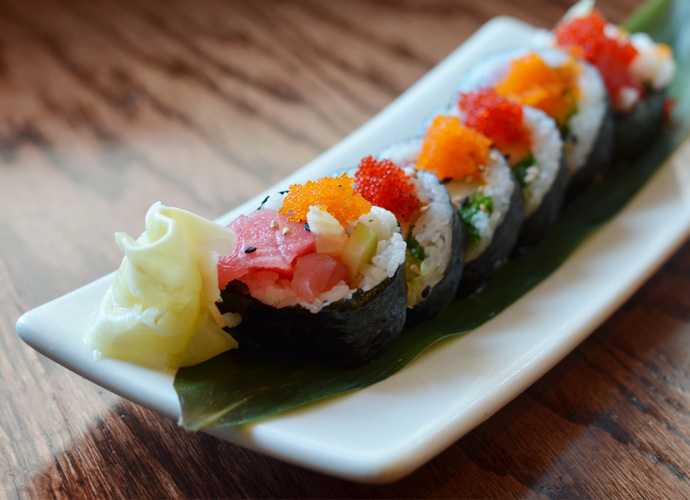 Things have been quiet for the last eight months at Chi Sushi & Sake in the Central West End. During that time, owner Jay Yoon sold the sushi lounge at 4 N. Euclid Ave., to his brother, Jae Hoon Yoon. Now, the restaurant has re-opened with an abbreviated name, Chi Sushi, and an expanded menu.

While Chi Sushi & Sake leaned toward the lounge scene, Chi Sushi posits itself as a full restaurant. Chef Whitney Yoon, wife of Jae Hoon Yoon, worked at Nippon Tei in Ballwin for 15 years before bringing her skills to the Central West End eatery.

The menu, previously a slate of sashimi, nigiri, maki and specialty rolls, now includes hot and cold appetizers and entrees. You’ll find a number of starters and small plates like tako yaki (crispy octopus balls) and kaki furai (fried oysters). Larger plates such as chicken teriyaki, grilled salmon and tofu-vegetable tempura are served in a bento box with miso soup, a house salad and rice.

The sushi bar has expanded its offerings as well. Look for more exotic fish and seafood, from giant clams to uni. More rolls have been added, including a number that feature crispy tempura thanks to the addition of a fryer in the kitchen.

Here’s a first look at the new Chi Sushi: