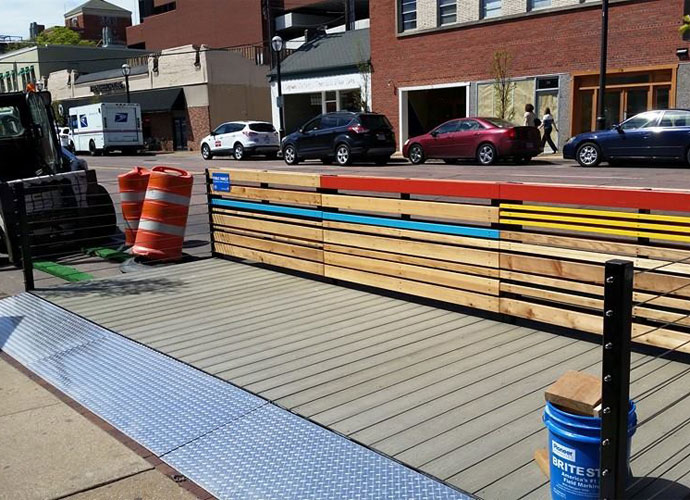 Clayton’s first foray into pop-up sidewalk seating was recently unveiled in front of Barcelona Tapas. It’s called a parklet and the public space seating can seat up to 14 people, as reported by St. Louis Magazine. The expandable patio measures 6.6-by-18 feet, about the size of two parallel parking spots.

“This is the king of the parklet pilot program,” said George Ertle, assistant to the city manager in Clayton. “We’ll see if it’s an idea worth pursuing.”

Ertle said the parklet idea came from committee meetings for Clayton’s Strategic Planning Process, dubbed “C the Future.” Frank Schmitz, owner of Barcelona Tapas, said he had seen parklets popping up in his travels to various cities over the past three years, prompting him to bring up the idea while serving on the committee.

Designed by Tao+Lee Associates and built by Pinnacle Contracting for Clayton, the project cost about $30,000. The parklet is made of pine wood sideboards, a galvanized steel ramp for the walkway from the street to the portable street seating, and Trex composite decking for the flooring, that will stay cool when it’s hot outside.

“It’s a public space, but the city allows Barcelona Tapas to use it,” Schmitz said, noting that people can enjoy the parklet with or without ordering from the restaurant. He said the tiny addition to the alfresco seating on North Central Avenue has been well-received, with people eating, socializing and relaxing.

The lighter traffic flow on North Central Avenue and its narrow sidewalks make it a good spot to test the parklet prototype, Ertle said, adding that several nearby restaurants have expressed interest in using them as well.

“They’re aimed at being both business and resident friendly. Parklets absolutely enhance a restaurant or shop,” Schmitz said. “But it’s a learning process for everyone. It’s a big question of how these will be financed in the future.”