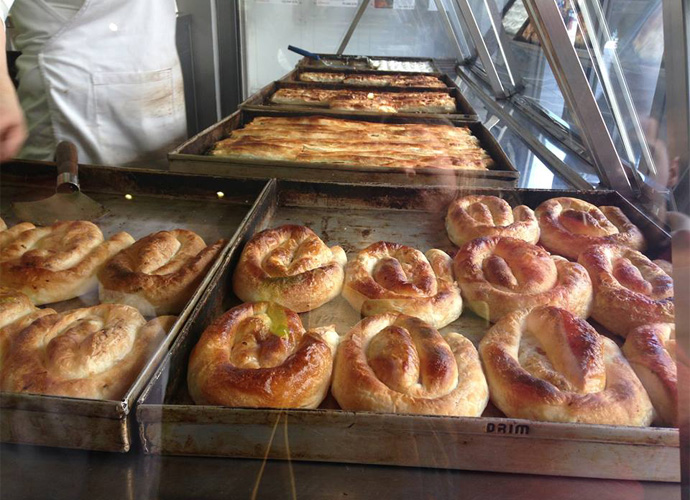 Just when you thought that every cuisine imaginable was already available from St. Louis’ mobile eateries, Balkan Treat Box rolls onto the scene. A taste of Eastern Europe can be yours in a matter of weeks, since Balkan Treat Box is slated to hit the streets as early as May 17.

“We are going to be doing the best of best Balkan street food,” said owner Loryn Feliciano-Nalic. The truck will offer Eastern European street fare such as burek (savory pies), doner kebabs with various sauces and vegetable toppings, and cevapi (minced, grilled meat often served on flatbread). The latter will be plated with kajmak (a dairy-based condiment that Feliciano-Nalic described as a cross between cream cheese, feta, butter and sour cream) and ajvar (a red pepper relish). Watch also for freshly baked Bosnian flatbread known as somun, as well as a rotation of desserts like baklava and tulumbe, an Eastern European dessert similar to churros. Since many of these dishes are customarily cooked over fire, the truck will be outfitted with a wood-burning oven. “Bosnia, Croatia, Albania, Turkey, Serbia … all these countries that make up the Balkans have their own versions of dishes, yet they’re all traditionally cooked over fire,” she said.

Beverage options from will include mineral waters, juices, yogurt drinks and small bottles of soda, mimicking what Feliciano-Nalic referred to as, “quick, easy, little, dainty drinks you’d get from an Eastern European cafe.”

Though not from the Balkans herself, Feliciano-Nalic has been influenced by Eastern European culture for years (Her childhood best friend from is Croatian and her husband, Edo Nalic, is Bosnian.), which led to her interest in the cuisine and a two-month food research trip to the Balkans in 2013. Helping Feliciano-Nalic with the new venture will be her husband and her brother-in-law Emir Nalic, who moved to St. Louis from Bosnia 18 months ago.

Feliciano-Nalic said she hopes that Balkan Treat Box helps to raise awareness of what Eastern European cuisine has to offer. “We have a huge Bosnian community here, but not enough awareness of their culture,” she said. “I’m super excited to show people a fun representation of this beautiful culture that is enriching St. Louis.”