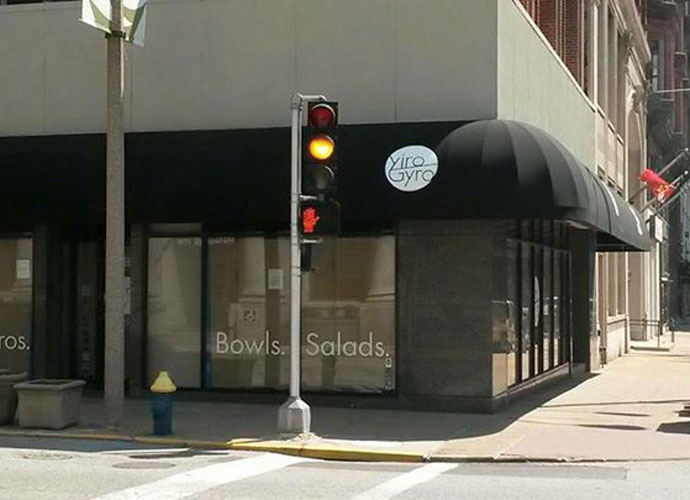 Gyro fanatics will soon be able to get their fix in downtown St. Louis; Yiro/Gyro is set to open at 750 Locust St., next week, in the location formerly occupied by Hamilton Jewelers. As originally reported by the St. Louis Business Journal, the 2,300-square-foot space will include 49 seats inside and an additional 16 seats outside.

This is not the first gyro endeavor for owner Mirza Imamovic; he also manages Gyro Company, which has two locations in South City and Oakville. This new restaurant concept will differ slightly from Imamovic’s current establishments. “Instead of choosing standard entrees like at Gyro Company, people at Yiro/Gyro will be able to build their own gyro, rice bowl or salad bowl,” he said. The location will have a smaller menu, but it will offer the same flavors and tastes one would find at Gyro Company.

At Yiro/Gyro, folks will be able to customize their entrees with spinach, chickpeas, tomatoes, cucumbers and onions atop grilled chicken, gyro meat or falafel. Side options will include hummus and pita bread, with baklava and tiramisu for dessert. Imamovic also plans to offer doner kebab, a popular European and Middle Eastern street food.

“I’m expecting a heavy carry-out business like we have at Gyro Company, but people will definitely have the option to dine in,” said Imamovic, who hopes to target the downtown business crowd with Yiro/Gryo’s quick meal options. “The downtown St. Louis area has really been getting vibrant, so it seems like the perfect moment to move in.”