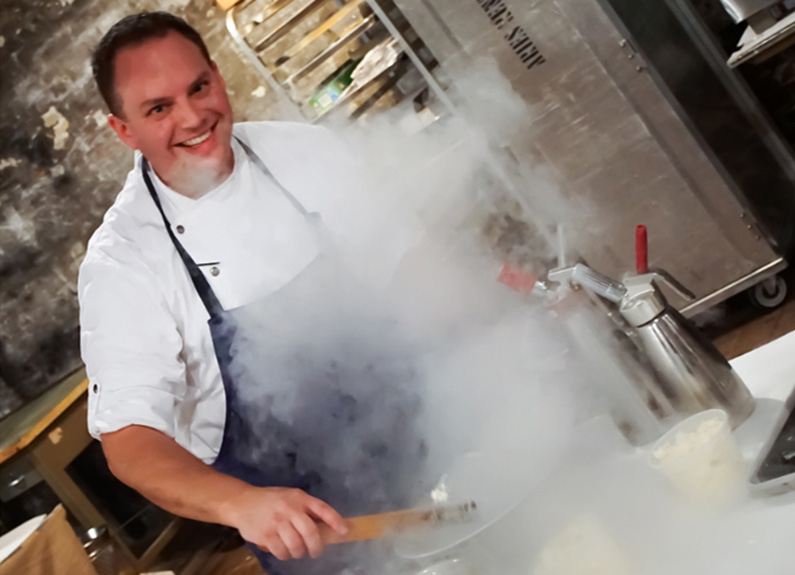 Chef-owner Ben Poremba announced today, June 7, that he has passed the toque at Elaia and Olio to Ben Grupe, who took over as executive chef of the Botanical Heights restaurants on June 1. Poremba said he needed to shift his role from one of chef to one of restaurateur, and so he tapped Grupe, whom he knew professionally but began speaking with in earnest in the last few months.

“I have five restaurants and a 4-year-old and a newborn,” said Poremba, whose company Bengelina Hospitality Group also owns Old Standard Fried Chicken, La Patisserie Chouquette and recently opened Parigi. “My workload needed to change, but I wanted to make sure the new chef would uphold our standards, continue what I started and improve on it.”

Most recently, Grupe helmed the kitchen at Meadowbrook Country Club before he struck out on his own, hosting monthly pop-up dinners out of the space that formerly housed Stellina. His five-course meals focused on regional ingredients and flavors. He also serves as the team captain for the American Culinary Federation Culinary Olympic Team, which competes in October.


Poremba said Elaia and Olio’s menus will change regularly, as they did under Poremba, incorporating more and more of Grupe’s dishes. “He’s not making my food,” Poremba said. “He is introducing new techniques and ideas and making it his own. He’s paying attention to the progression and nuances of the meal.”

Don’t expect to find Poremba kicking back on his front porch in a rocking chair. Although the transition will allow him to spend more time with his family, he said he also looks forward to being more present in his other restaurants and focusing on other projects. “I’m looking forward to being seen in my other restaurants and going where I’m needed most,” Poremba said.