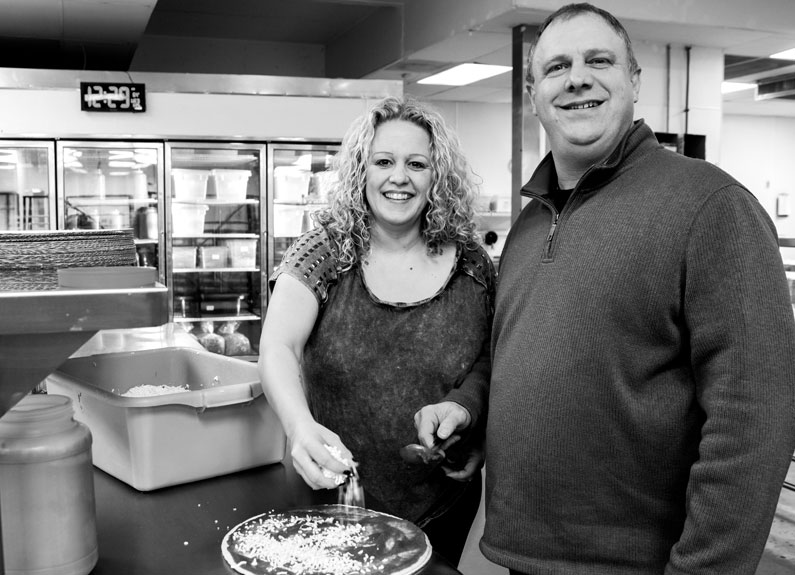 What I Do: Meredith and Rick Schaper of Dogtown Pizza

Rick and Meredith Schaper had big plans in 2006: open a pizzeria serving St. Louis-style pies. But when the economy started to decline, the Schapers had to try another strategy. Today, more than 300 retailers carry frozen Dogtown Pizza, each handmade and flash-frozen at their warehouse in North City. Here, the Schapers tell how their business thrived in a tanking economy – and why they’ll never move to West County.

The Early Years
“The only pizza I had until I was 14 was Imo’s. My first sleepover, we had Domino’s with pepperoni, and I didn’t know what either one of them was. For us, [pizza] was a special occasion. We went and sat at Imo’s – we didn't even get carryout.” – M.S.

“The real core of me is Farotto’s Pizza in Rock Hill. I started there when I was 11 and worked there until I was 21, so I had 10 years in a pizzeria. Literally, you’re at the most influential stage of your life from 11 to 21. That was my life. I didn’t think I’d do anything but work at that place. I was already the kid that hung out with my mom in the kitchen. [There are] stories of me on a stool, licking the strings off the roast beef.” – R.S.

A Rough Start
“We invited some investors and tried to throw a party to raise money for a restaurant, and we got zero dollars. … It was right when [the economy] was crumbling. In our first year being in the frozen business, restaurants closed left and right. … The good fluke was people stopped going out to eat and grocery shopped more, and that’s where we were – in the grocery stores.” – R.S.

“Talk about trial and error. The first batch of labels weren’t coded so that the ink wouldn’t run in the freezer. We didn’t know to tell [the printer] that. When we said we were putting it on a pizza, we thought they knew!” – M.S.

Dogtown or Die
“Everybody asks, ‘When are you moving out to Chesterfield?’ Never – I’m staying in my nice cozy brick home in Dogtown. … My parents met and dated in Dogtown. My mom grew up and went to grade school at St. James the Greater and got married at St. James the Greater in the ’50s, and our first house is on the same street as my parents’ first house. … It’s still in the city, it’s close to everything, and the community and people are just tight-knit.” – R.S.

“It’s like ordering a Jack and Coke and getting a glass of ice.” – M.S.

Dogtown Pizzeria?
“There’s a really strong fire inside me that still wants [to open a restaurant] because I enjoyed it, but then I go back to the risk of restaurants, the hours, the toll on your body and I say no way. … I’m not saying I couldn’t make it work – of course, in my mind I know I could – but there’s still a risk.”– R.S.