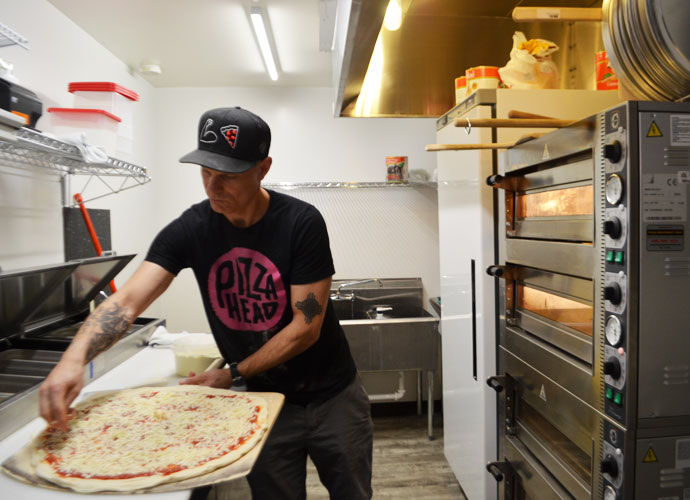 Scott Sandler, best known for his vegetarian Neapolitan pizzeria Pizzeoli, is putting the finishing touches on his latest pizza project, Pizza Head. As The Scoop reported in January Sandler took over the space at 3196 S. Grand Ave., the former home of Absolutli Goosed and Brickyard Tavern. The new restaurant will serve up New York-style pies to the sounds of classic punk music when it opens in early May.

The menu features cheese, white and vegan 20-inch pizzas with a short list of vegetarian toppings. With just one salad and a handful of drinks, the barebones menu is focused on pizza specials. An enormous cheese pizza and four 16-ounce cans of Stag are available for $25, or snag two foldable slices and a pint for $8.

“The great thing about this pizza is it’s great warmed up,” Sandler said. “Reheated it’s almost better.” He hopes about half the business will be carryout and plans to partner with Postmates to offer delivery.

Pizza Head will be open for lunch and dinner Tuesday through Sunday, starting around the first week of May with a possible soft opening next week. Here’s a first look at what to expect on South Grand’s newest place to grab a slice: