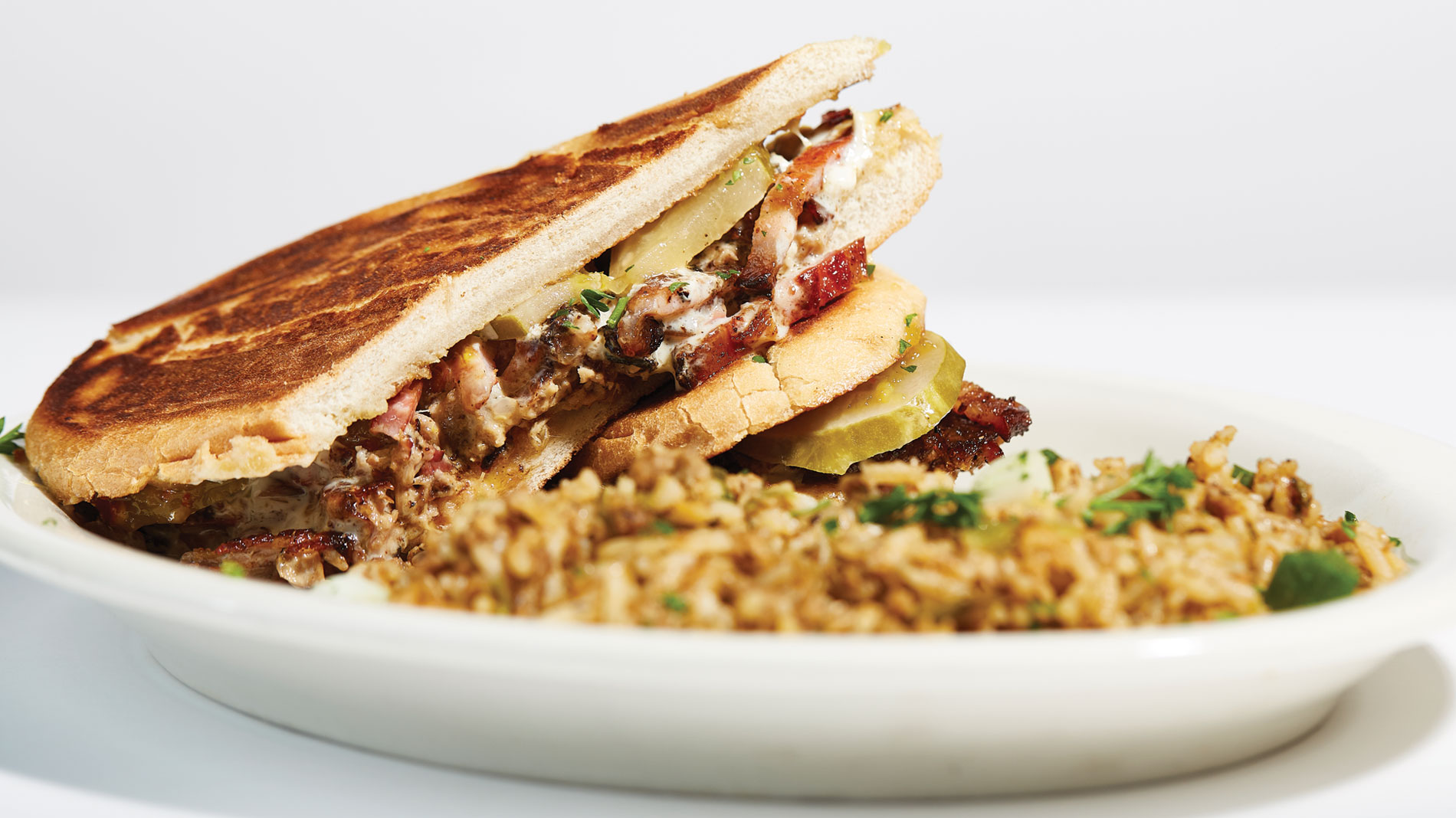 “First, you make a roux” is the classic pronouncement of every Southern cook. After my first two bites of seafood gumbo at Sister Cities, the Cajun restaurant now located on South Broadway, I got the sense that chef and co-owner Travis Parfait takes the declaration seriously. Whether dark and smoky or light and nutty, roux is the foundation upon which gumbo is built, and even a gumbo simpleton like me can distinguish Parfait’s as seriously exceptional.

That Parfait is still making gumbo is a testament to the Louisiana native’s grit. When he and his partner/co-owner Pam Melton, who works the floor, opened Sister Cities Cajun & BBQ in 2013 in Dutchtown, it was a hidden gem – one of the best Cajun restaurants in town. Then, 2016 became the year of catastrophes. In January, a car crashed through the front window. The restaurant reopened with difficulty. Then, unbelievably, another car smashed into the building in March, making the couple question the logic of working so hard on a building they would never own.


After operating on a pop-up basis out of Melt on Cherokee Street, the reincarnation of Sister Cities Cajun debuted in a renovated three-story brick building in the Marine Villa neighborhood of South City a year later. There are 120 seats, including a deck out back overlooking the upcoming dog park. The space has 12-foot high ceilings, lots of natural light and even a Bitcoin ATM for the cryptocurrency-savvy.


But back to that superb gumbo. It starts with a dark, mahogany-hued roux. The multi-hour process incorporates seafood and vegetable stocks, clam juice and spices simmered with plump shrimp, bits of clam, crawfish and bite-sized scallops for an abundance of complex flavor and intoxicating aroma. True to Parfait’s country Cajun tradition, oil (not butter) formed the roux, the holy trinity was present (onions, celery, bell peppers), the garlic redolent and the tomatoes nonexistent.

Gumbo showed up again in the Dirty Chick, one of several dishes carried over from the old, accident-prone restaurant: a plump and juicy smoked chicken breast smothered in gumbo on a bed of dirty rice. In a kitchen devoid of shortcuts, Parfait grinds the pork butt and chicken thighs for the rice himself.


Other returning favorites include chicken and sausage jambalaya and a lineup of po’boys. The former veered slightly from traditional preparations, consisting of smoky, shredded thigh meat and spicy chicken sausage from G & W Sausage Co. with rice and a variety of veggies. For the Cuban po’boy, a hoagie was layered with smoked, crispy-edged pulled pork and pork belly with crunchy house-made pickles, mustard, Provel cheese sauce and a delicious, locally made sweet-spicy pepper relish spread with the unfortunate name of Goose Poop. It was good enough to make every other Cuban sandwich wither in embarrassment.


Like that riff on the Cuban, the shrimp and grits weren’t prepared classically. There was no bacon, the meaty shrimp were sauteed in brown butter and – this is where it got interesting – in lieu of creamy grits, savory grit cakes and a piquant red sauce provided the tasty Southern stalwart’s foundation. A trio of crawfish and crabcakes included house remoulade and corn-poblano salsa. Even with such a standard dish, Parfait excels – instead of mayonnaise, he binds the meat with a vegetable and flour roux and egg.

Other little touches making Sister Cities stand out include house-made salad dressings (the lighter yogurt-based dressing in the Cajun slaw was a favorite) and cocktails made with plenty of attention. A far cry from the sickeningly sweet pre-mixes, Melton’s Hurricane Kennedy (named for her mother) is made with fresh, strained macerated fruit, three kinds of rum and a splash of Irish whiskey for added depth. I prefer red sangria, but had to admit that her white wine version impressed with pear, brandy and Missouri bourbon.


Lest you think Sister Cities is a one-trick Cajun pony, consider the smoked meats and tacos. BBQ may no longer be in the name, but it’s still a big draw, especially on Saturdays when ribs are featured. The beloved chicken wings returned to the daily menu in all their massive, smoky glory. Like the ribs, Parfait rubs them with his own blend of Cajun herbs and spices before smoking and finishing in a convection oven with a second rub. The result is a tear-apart frenzy of crispy, savory skin and succulent meat.


The three taco choices (blackened fish or zucchini, spicy shrimp and smoked chicken) are a natural fit on the new menu. Larger than mini street tacos, these beauties come two to an order with enough filling to make the dish meal-sized. My deeply smoked chicken tacos were benefited by some thick pork belly and greens, all dressed with a creamy herb sauce. Also new to the menu was a vegetarian stir-fry of seasonal vegetables served over caramelized riced cauliflower.


That last dish, the zucchini tacos and even the Creole pasta show not only the breadth of the kitchen’s talent, but the value that Parfait and Melton put on satisfying different tastes while providing a good time with great food in a cool space. That is, after the roux is made.