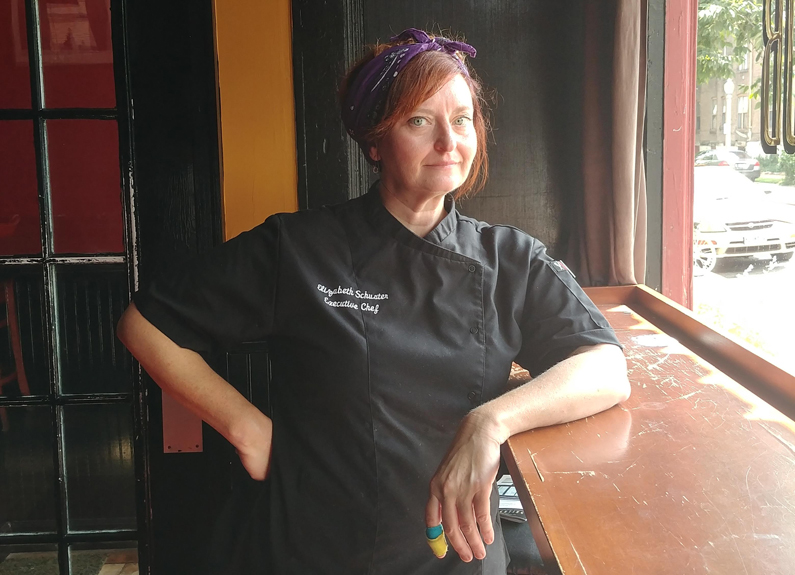 Schuster, the chef behind Tenacious Eats, has helmed the kitchen at WEGAP for the past three months. She said she was attracted to the position because she felt a kinship with the owners.

“I’ve had other offers to go to other restaurants, but they just didn’t feel right,” Schuster said. “I didn’t want to crank out the normal fare. I wanted to be part of something that’s a little more bizarre.”

Schuster recently debuted her first original menu at WEGAP, featuring items like The Chicken and The Egg, a trio of chicken wings with a bourbon glaze, two horseradish deviled eggs and chowchow, and a Falafel Waffle served with house-made roasted garlic hummus and greens with a yogurt and goat cheese dressing. The restaurant’s popular mussels, though, aren’t going anywhere. “We had to keep those. They’re unbelievably good,” she said.

Despite the new gig, Schuster said Tenacious Eats will still very much continue at the restaurant and other venues.

“I think we may even be doing more and pushing the boundaries a bit,” Schuster said.

Prior to taking over the Bottleworks kitchen last month, Pilon was the longtime executive chef at Norwood Hills Country Club. He said his first fully original menu will debut in September, and he plans to continue the restaurant’s tradition of working with local producers and take full advantage of the Bottleworks garden.

“We want to keep the essence of the restaurant,” Pilon said. “I think the beers speak for themselves. They’re approachable and interesting, and that’s the approach I want to take with the food.”

“There might be some kimchi in there, some gochujang. I’m going to play around with things a bit, stuff that’ll go well with beer,” he said. “Everyone wants me to put a poutine on the menu because I’m from Quebec. If I can think of an interesting poutine, I might.”