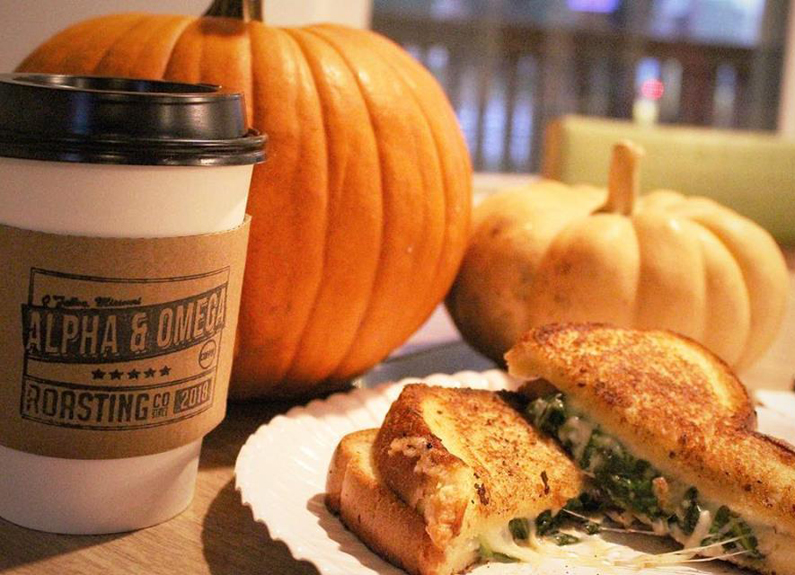 “One of our most popular brews [at Good News] has always been our hazelnut coffee milk stout,” Tripp said. “So when we realized how much people enjoyed our coffee beers, we thought, ‘Why not just open up a coffee roastery where we can roast our own coffee and control the flavors?’”

With only one other independent coffee roaster in the area, Tripp and Fair were excited to open their doors in the neighborhood. “The community response has been great,” Tripp said. “Not many big businesses open in the area, so there isn’t much growth. We want to be part of the revitalization of north O’Fallon.”

Alpha & Omega air roasts its dark and medium roasts on premises in small batches, almost daily. “At the brewery, we call [some of] our selections ‘gateway beers’ because they’re easy and approachable for customers who aren’t familiar with IPAs and the like,” Tripp said. “We’re taking the same, simple approach to our coffee.”

Tripp is partial to Honduran beans in all his blends. “I have a passion for Honduras, because I did many mission trips there,” he said.

Customers will also find a variety Cameroon blends, especially for its cold brews. Tripp also plans to offer nitro teas, as well as a variety of Good News beer on tap, including a nitro coffee stout.

Jane Thier is an editorial intern at Sauce Magazine.