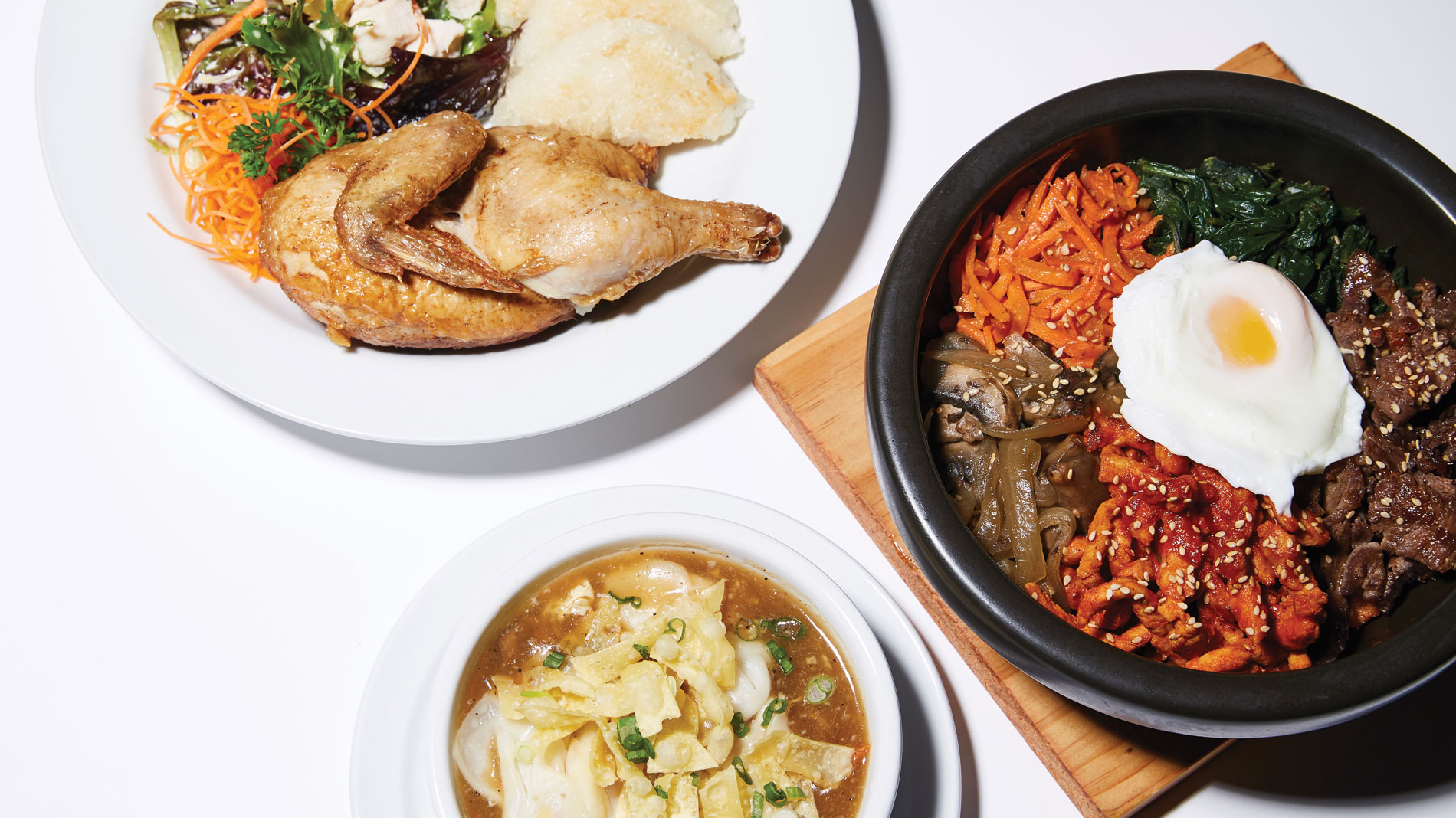 On a recent evening at VP Square, four diners got up to leave right after they were seated, settled and served water. Evidently, Cafe Mochi was packed, and they had come over hoping for something similar. It’s a reasonable assumption considering the Pham siblings – Duncan, Mina and Victor – operate both restaurants, just a couple blocks apart down South Grand Boulevard. But where Cafe Mochi is Japanese-centric, VP Square is all over the East-Southeast Asia map.

Had they not been so dead set on sushi, those four diners could have eaten their way through myriad culinary cultures – from Chinese hot pot and Korean bibimbap to Japanese ramen and Vietnamese banh mi. Chef Duncan Pham handles them all with deftness. Straightforward fare like pork chops, chicken wings, salmon and game hen are also deliciously elevated with Pham’s imprint.


A thick, chargrilled bone-in pork chop, for instance, is about as American as it gets, but when marinated with lemongrass, garlic and fish sauce, it becomes the seductive Vietnamese classic thit heo nuong xa, served here with steamed rice, a fried egg and sweet, sour, savory nuoc cham dipping sauce. My only suggestion is to ask how customers like the chop cooked, since I like mine pinker than the well-cooked chop I got.

I’d call it the ultimate comfort food were it not for the crispy Cornish game hen on the menu: a leg quarter, half-breast and attached wing perfumed with the warm tones of Chinese five-spice powder and fried to crispy goldenness. Four bars of pan-fried coconut sticky rice provided a sweet starchiness. The little side of grilled chicken salad threw me at first, but it made surprising sense when I tasted its creamy savoriness against the crunch of the fried wonton strips sprinkled atop.


What inspired such a broad, diverse menu? In the post-war Vietnam of the early 1980s, the Phams were among thousands who fled the country’s brutal Communist regime. They lived as refugees in Thailand and the Philippines before settling in the U.S., and Duncan cooked through it all – at home in Vietnam, in refugee camps, then in U.S. restaurants.


One after the other, the three siblings settled in St. Louis and gained success with Cafe Mochi. At VP Square, which opened in March, the Phams hope for similar success with Duncan in the kitchen, Mina running the fronts of both operations and the restaurant’s namesake, Victor, handling the business side.


That I’m praising fried rice in a review is a testament to Duncan’s magnificent version of the midweek takeout favorite meant to be eaten mindlessly in front of the television when you’re too damn tired to cook. (Just me?) There were bean sprouts and, of course, peas, carrots, onion and egg. But bacon, Chinese sausage, barbecue chicken and kimchi all added layer upon layer of spicy, meaty, funky complexity rarely found in takeout.

Also unparalleled: VP’s hot and sour soup, chock-full of bamboo shoots, black mushrooms, carrots and scallion in a thick, heady white pepper-scented broth. The addition of shrimp and pork wontons made the appetizer more meal-like and the whole thing the best hot and sour soup I’ve had yet.

The unappetizingly named egg-encrusted shrimp wontons would also make a light meal. Here, those lovely, plump steamed wontons were wok-fried with eggs for a frittata-like dish of sweet shrimp and savory pork.


Praising the Korean bibimbap is easy – the marinated beef bulgogi was sweet and tender, the vegetables (spinach, onion, carrots, mushrooms) were sauteed but not mushy, the egg added silken creaminess and, most important, it was all cooked in a stone bowl, making the rice underneath satisfyingly crunchy.


Only a couple dishes on the long, diverse menu disappointed. I found the pineapple dipping sauce for the coconut shrimp (tails on, as it should be) too sweet to counter the natural sweetness of the coconut, and the peppercorn chicken wings lacked any real heat, despite being tossed in a hot wok with chili pepper and Sichuan peppercorn. The traditional Chinese way of chopping chicken crosswise through the bones may work on larger cuts, but with these wings it made it downright difficult to gnaw around the sharp, hacked edges to get to any meat.


VP Square is located on Juniata Street, just behind The King & I Thai restaurant, and occupies two floors of the building once home to a hair salon. Inside the beautiful brick and white stonework façade, the inviting space is awash in natural light, with pale yellow walls and antler chandeliers in the main floor dining room and a contrasting bright and muted color palette in the upstairs dining room and bar.


Menus as extensive and varied as VP Square’s aren’t usually this solid. There are poke, ramen, hot pots, bubble tea and fruit smoothies to get through on return visits. Just don’t expect sushi – that’s up the street.