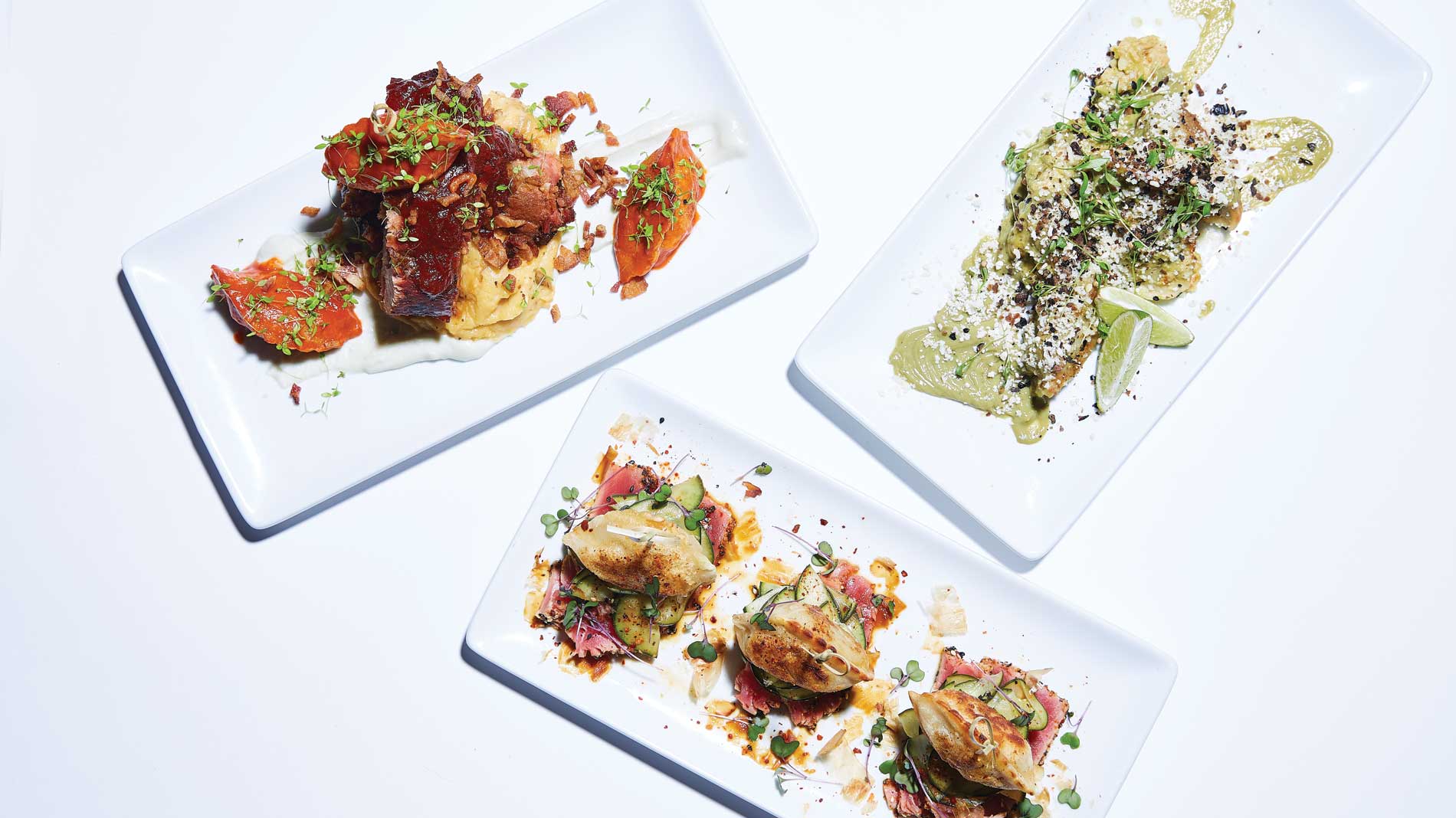 I love restaurants embedded in neighborhoods, especially my neighborhood. When I heard of a place opening on a quiet residential street in Tower Grove South, I was intrigued. When I learned Crispy Edge's menu was devoted to my favorite finger food – pot stickers, those irresistible, pleated, puffy pillows of comfort – I was downright thrilled.

Proust had his madeleine. For St. Louis entrepreneur David Dresner, the Chinese pot sticker is a remembrance of things past – of time spent rolling dumpling dough with his grandfather, a Korean War vet and culinary school graduate.

In addition to owning a custom coffee sleeve and coaster company, Dresner started what he called his passion project, wholesaling pot stickers to local businesses, five years ago. He renovated the back of a former community center into a production facility and catering commissary and, after a few pop-ups and private dinners, converted the front into a weekends-only restaurant.

It’s all quite sleek – more Washington Avenue than Juniata Street – with dark ink-colored walls, subdued lighting, a bar in the back and a comfy lounge area in the front. The grow lights from a couple hydroponic walls alive with microgreens cast a deep, rosy glow.


Our exposure to pot stickers has long been as a takeout commodity. Dresner cherished those versions he chowed down on the way home from school as a kid, but I bet they weren’t as memorable as the traditional pot stickers I ordered one night, consisting of ginger-seasoned ground pork and cabbage and citrus ponzu glaze, topped with daikon microgreens.

If the Mexican chilaquiles is any indication, I’m all in on the gourmetization of the Chinese snack. Garlicky dough surrounded a piquant chicken verde filling with black beans, cotija crumbles and cilantro sprigs scattered on top. A squeeze of lime and an avocado crema dipping sauce provided creamy zing, and I added the grilled street corn small plate – sweet, salty, savory, nutty, creamy and tart all at once – to complete my meal.

The most popular is another Mexican-inspired version: the vegan Azteca. Who doesn’t like seven-layer black bean dip? Wrap it up with a square of nutty chia seed dough, slide it through a drizzle of creamy, cool lime-cilantro crema and a kicky tomato-picante salsa, and you’ve got the ultimate party for one.

You can taste each ingredient used in making the different doughs, fanciful fillings and savory sauces – a testament to executive chef Tori Foster’s attention to the art and science of pot stickers. The chorizo-date variety, made with turmeric dough, best exemplified the difference between creatively crafting and merely manufacturing food. A lemon pepper cream dipping sauce both complemented and cooled the spicy-sweet dumplings’ robust flavors.


Pot stickers come either three or six per order, and it can be difficult to narrow choices. Here, Crispy Edge could benefit from a sampler plate or pot sticker flight. There are also four dinner entrees on offer, along with a seasonal option, each paired with specific pot stickers and a cutesy name.

From the Sea consisted of three slices of sesame ahi tuna lined up like crimson stained-glass tiles topped with thinly sliced wasabi-marinated cucumbers and a traditional dumpling. A splash of citrus ponzu provided acidity while bonito flakes (katsuobushi) imparted subtle smokiness. A side of bok choy to share rounded out the meal.

My other favorite, From the Coop, consisted of a jerk chicken thigh atop sofrito rice with grilled pineapple relish paired with the spicy chorizo-date pot stickers. For the Party also packed in the flavor with sticky, succulent St. Louis-style ribs slathered in sweet, tangy barbecue sauce on a mound of bacon-cheddar mashed potatoes and blue cheese sauce. Buffalo chicken pot stickers – ranch-herb dough plumped with a chicken and celery filling and glazed in Buffalo wing sauce – accompanied the dish.


Sunday brunch offers five unique entrees incorporating Breakfast Stickers. (A bottomless cup of Blueprint coffee comes in handy while making hard choices.) The Quiche au Chevre dumplings proved a good choice with chive dough filled with egg and creamy goat cheese. Ordering Eggs Your Way (two eggs and three pot stickers covered in your choice of sauce) with the biscuits and gravy pot sticker, however, arrived with everything loaded on a small plate, making for a messy, albeit delicious, dish.

For dessert there are apple pie and Cherry Blossom pot stickers. The former wrapped apple pie filling in cinnamon dough and bourbon-caramel sauce, while the latter used almond dough as the vehicle for mascarpone-cherry filling.

Crispy Edge serves cocktails, but it’s the quality and affordability of the wine list that sets it apart. No glass is over $8, and no bottle exceeds $27, which is perfect when you want to sit outside on a summer evening sipping French rosé or meet friends on a snowy weekend afternoon to share Spanish rioja while munching on the most creative pot stickers in town. Especially in your neighborhood.