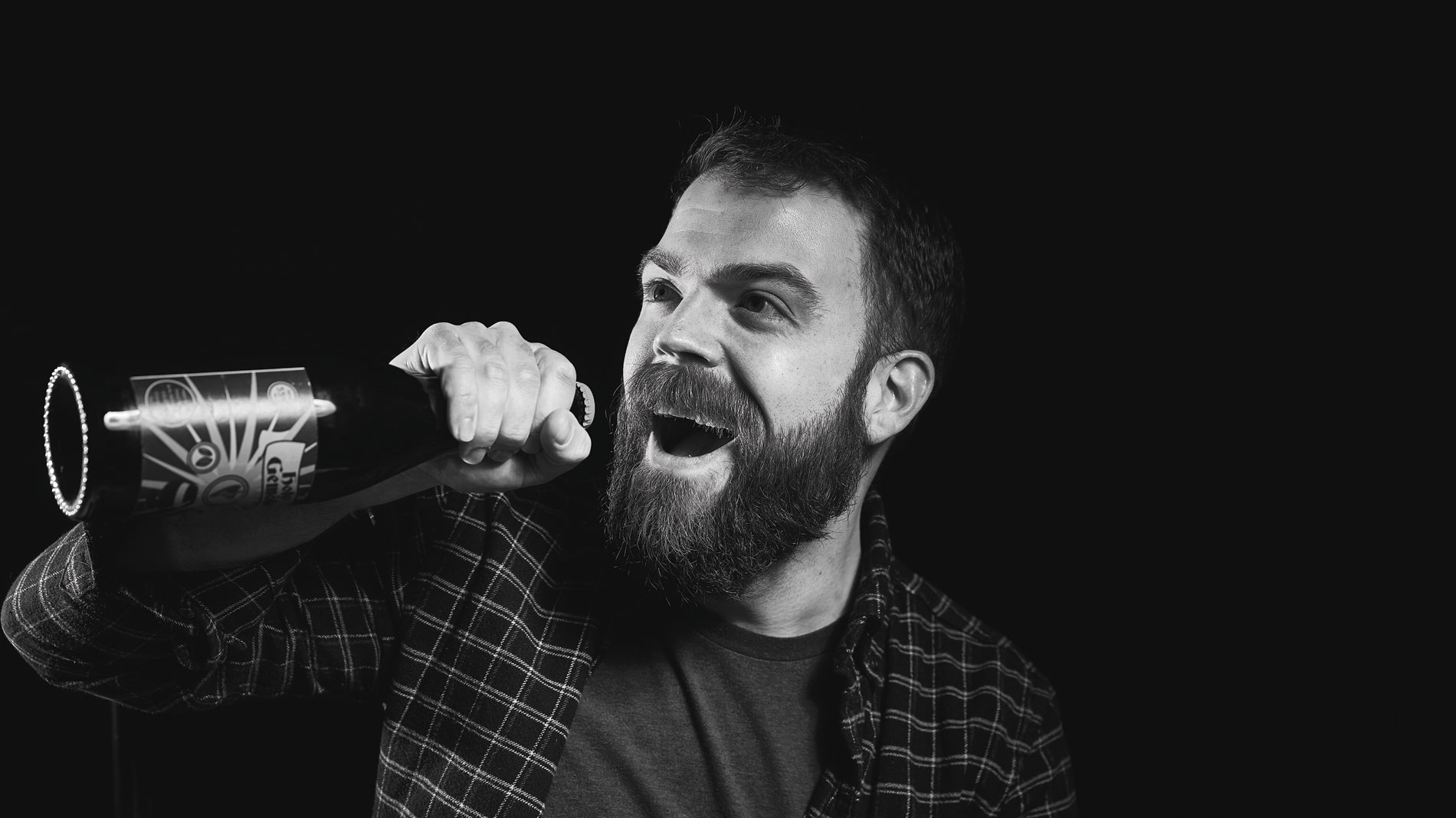 It’s a cold, windy night in South City as I enter Perennial Artisan Ales’ tasting room to attend a monthly meeting of the local homebrew club STL Hops. The familiar space begins to transform into something completely new as brewers enter one by one, walking past me with their various growlers, unlabeled carafes and washed-out 2-liter soda bottles filled with dark liquid. I feel like an outsider.

They set up and start pouring drinks. Everyone seems to know each other, and as I talk with a few of the brewers, the camaraderie begins to rub off on me.

“Anybody need beer?” rings out over the buzz of alcohol-infused chitchat. Glasses are filled; some of the brewers nod in approval as they drink, while others appear deep in thought. At least a dozen different brews are flowing. A stranger walks over and, without a word, fills up my 2-ounce tasting glass with a German-style lager. I find out later this was Dave “Davo” McWilliams, who won first place at Anheuser-Busch’s BrewFest competition in 2014.

Over the next hour, I try a number of wild creations made by people more than happy to share. Doc Brookman’s blackberry Berliner Weisse is beautifully sour with an incredible ruby hue; Sean Gemoules’ rye IPA is sharp and hoppy, every bit as tasty as 4 Hands Brewing Co. Divided Sky Rye IPA, which I buy weekly as my house beer. McWilliams’ Trappist single and Scottish Wee Heavy are both excellent. I also try a magnificently murky New England IPA and a fragrant, roasty schwarzbier, both of which are just sitting on the bar unattended. Tasting each beer, I wonder why none of these guys work in the industry.

These beers are, to be sure, among the best you can drink in St. Louis – and you can’t buy them anywhere. Why is such quality kept so private, only shared at meetings and among friends? Is it a question of resources, or do these people just want beer to remain a hobby? The more brewers I talk to, the more it seems their reasons for homebrewing are all different. The common denominator, of course, is a love of beer.


Troy Meier, a former president of STL Hops, has competed in homebrew circuits throughout the country, from Texas to California, but after pursuing competitive glory, he decided to take a step back to really look at the beer he was making. In the competition scene, he tells me, judges give good assessments based on categories like aroma, mouthfeel, visual and taste, but he found he never learned much from their feedback. The judges’ notes always left him wanting a more concrete direction for his recipe and process – there just wasn’t enough to help him improve.

“I’m talking about detail detail,” Meier says. “What’s making a beer really good – the difference between that and a great beer. That’s when I started to get frustrated, trying to get feedback on my recipes.”

The Beer Judge Certification Program style guideline book is 93 pages long, with encyclopedic-level entries for every beer under the sun. Yet, one rule of some competitions is that you can’t share your recipe with the judges, which means it’s difficult to get an idea of exactly where you’re going right or wrong. What was lacking in the circuit, Meier found in the local homebrewing scene.

“My little group that I run my beer by, I can tell them the recipe. I’ll show it to them after they blind taste [the beer],” Meier says. “They can go, ‘Oh, maybe you should do this, this or this.’ And then we’ll have a discussion about it, which is way better than any feedback you’re going to get out of a blind competition.”

Meier feels like his beer has only improved since he’s stopped competing. Though he seems near the top of his game, he’s happy to keep brewing for fun while continuing in the IT field, where he’s worked in project management for over a decade. Meier is interested in eventually setting up a tasting room, but is also wary of the economic reality of operating a brick-and-mortar.

“I know what it takes to start out, and what you’re not going to make in the first three years. Even if you’re successful after that – and our market’s kind of saturated now – I’d have to come up with a business plan. The economics of it just really don’t make sense for me, to quit my job and all that.”

For Sean Gemoules, a National Homebrew Competition (NHC) silver medalist whose day job is in mechanical engineering, the choice is simple. “I love my job as an engineer,” he says. “You think about [brewing professionally], of course. It’s a lot of homebrewers’ dream to be able to share beer with the public at large on a scale that you can’t do as a homebrewer.” But after brewing for six years and competing for almost as long, Gemoules understands his commitments and priorities.

Homebrewing is about toeing the line between freedom and limitation. “If you own a brewery, you might be inclined to be concerned with greater public perception or a drinkability that’s favorable to a lot of people. But if you make your own beer, you can make it how you want to make it,” he says.

And it’s not just creative freedom; there’s also a financial question when it comes to brewing, Gemoules tells me. “Everyone is making the New England-style IPAs – that’s a trend right now,” he says. “Oftentimes, homebrewers can do just as good, if not a better job with that, because of the amount of hops you can put into a small batch. It’s a very expensive beer to make because of the quantity of hops, so homebrewers can do it on a smaller scale.” In many cases, smaller, homebrewed batches have an advantage over what a professional brewery can manage, especially when the style is costly to master.

Audio engineer Matt Fitzgerald has been brewing for about 10 years, which is half as long as he’s been working his main gig: running the sound on concert tours for Peter Frampton, Ringo Starr and the B-52s. Touring with these musicians, Fitzgerald has visited beer communities in all corners of the world and still chooses to make St. Louis his home. “I would say St. Louis is up there in the rankings of some of the big beer towns,” he says. “We have a lot going on here. It’s definitely a great beer community.” And the homebrewing scene is part of that.

“In our club, you learn a lot from other people’s styles and methods. It’s been fun along the way. That’s what a hobby is – it’s fun,” he says. Fitzgerald has done the competition circuit too. He’s won big in local competitions, but with his travel schedule he only brews about a dozen batches a year. He’s made it to the final round of the NHC three years in a row but hasn’t won yet.

Fitzgerald has found a feeling of comfort in St. Louis’ homebrewing scene, where he can relax and make the beers he likes to drink – lately, Altbiers, lagers and blondes. He took first place in a local competition for his “Bud Light clone,” an American light lager he made for his mother, who loves Anheuser-Busch. He even printed out labels for bottling. It’s called Jan Light.

Creative people especially struggle with the alienating distinction between work and hobby, labor time and free time. “I work at a cafe,” someone may say, “but I’m really a musician.” Or, “I’m a painter and a graphic designer. Plus, I work a 9-to-5 as a paralegal.”

In an ideal world, artists and artisans could support themselves by doing what they love. However, even though it’s tempting to try to get paid for something you’re good at, not everybody wants to monetize their hobbies. And there’s something to be said for those operating as far outside commercial constraints as they can. These homebrewers have found ways to cultivate their brewing talent while still working in other fields they love, and it shows in their beers.

Toward the end of my STL Hops excursion at Perennial, I end up talking to Doc Brookman, who boils it down to a question of materials. Brewing is about getting as close as he can to his ideal beer. “Being a homebrewer allows one to be more selective of each and every ingredient that goes into each beer, mead, cider or wine. Personally, I have experimented with many different grains, hops and yeasts over the years to figure out what exactly fits my palate,” he later tells me.

With the taste of his remarkable Berliner Weisse still on my tongue, I think about the amount of control and discipline it must take to create beer like this in your garage or basement, at night and on weekends, how much time and money you’d have to invest in it, and with so little recognition. “The best songs will never get sung,” Jeff Tweedy sings in Wilco’s “The Late Greats.” “The best life never leaves your lungs/ So good you won’t ever know.” It’s not an exact analogy, since these beers get made. But they’ll probably never wind up in your hand.

There is a certain freedom in homebrewing, an opportunity to follow your desire to its natural end, to hone your skill to produce something you love without the constraints of efficiency, profit or customer satisfaction. Whether brewed professionally or not, beer is best enjoyed with people you care about, and the brewers of STL Hops know this better than anyone.

“If it grows together, it goes together.” At Vicia​, a similar attitude has yielded a food ...