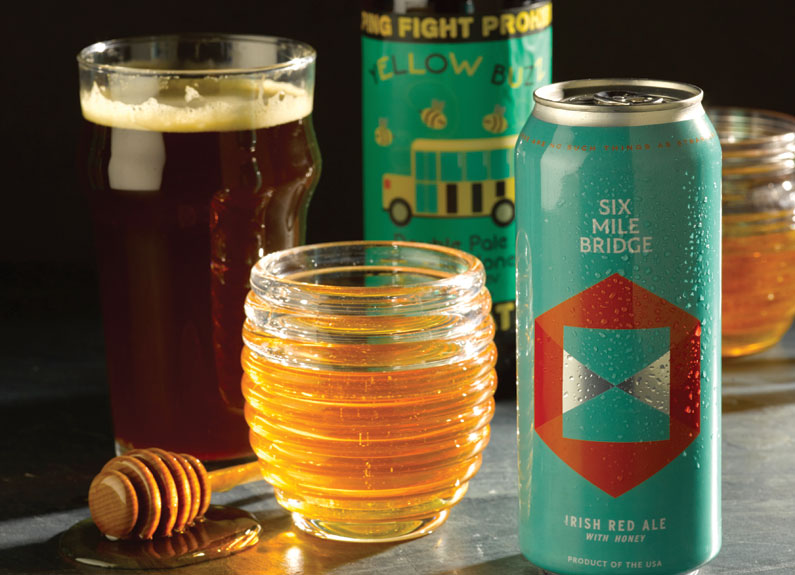 st. louis breweries like six mile bridge beer and recess brewing co. use honey in some of their brews. photo by jonathan gayman

While it may conjure up saccharine associations, honey can bring much more than sweetness to the table when used in brewing beer. It’s one of the earliest ingredients ever used to make fermented beverages, and it continues to be a go-to for modern brewers.

Honey is often used during fermentation to accentuate texture and color, or added after the boil for enhanced aromatics. It only sweetens beer when added after brewing. But it’s tricky to work with.

Honey can be damaged by the heat of the brewing process, and the viscosity makes it a mess to use, according to Earthbound Beer brewer-co-owner Stuart Keating. Too much or the wrong hops can overwhelm honey’s inherent nuances. But the results are worth the effort.

“The complexities [honey] offers you can’t get anywhere else,” said Side Project Brewing brewer-co-owner Cory King. “It brings a real delicateness to the table.”

With spring on the horizon, area breweries are bringing a variety of honey brews to market. Earthbound recently released its annual lavender braggot, a mead variant brewed with malt as well as honey, and will release Space Dream, a braggot with blackberries, in September.

Side Project is set to brew a yet-unnamed tripel with honey for the National Honey Board’s annual Honey Beer Summit to be held in St. Louis this August. Perennial Artisan Ales recently brought Ancient Names, a Belgian saison made with Spanish rosemary honey, back to its tasting room, while Contentious Matters, an extra porter made with melter honey, is still available. Here are a few more honey brews available to try now.

1. Six Mile Bridge Beer Irish Red Ale With Honey
This smooth red ale has a good amount of butterscotch and toffee on the nose and the palate, thanks to the honey in the mix. It finishes long and dry with just the right touch of bitterness.
Craft Beer Cellar, 8113 Maryland Ave., Clayton, 314.222.2444, clayton.craftbeercellar.com

3. Recess Yellow Buzz
This fruity and floral Imperial pale ale is a hot-rodded version of Recess Yellow Buss Pale Ale. Honey is added during fermentation to ramp up the booze level to a hearty 8.6 percent and produce a subtle depth of flavor.
Recess Brewing Co., 307 N. Main St., Edwardsville, 618.692.5101, recessbrewing.com