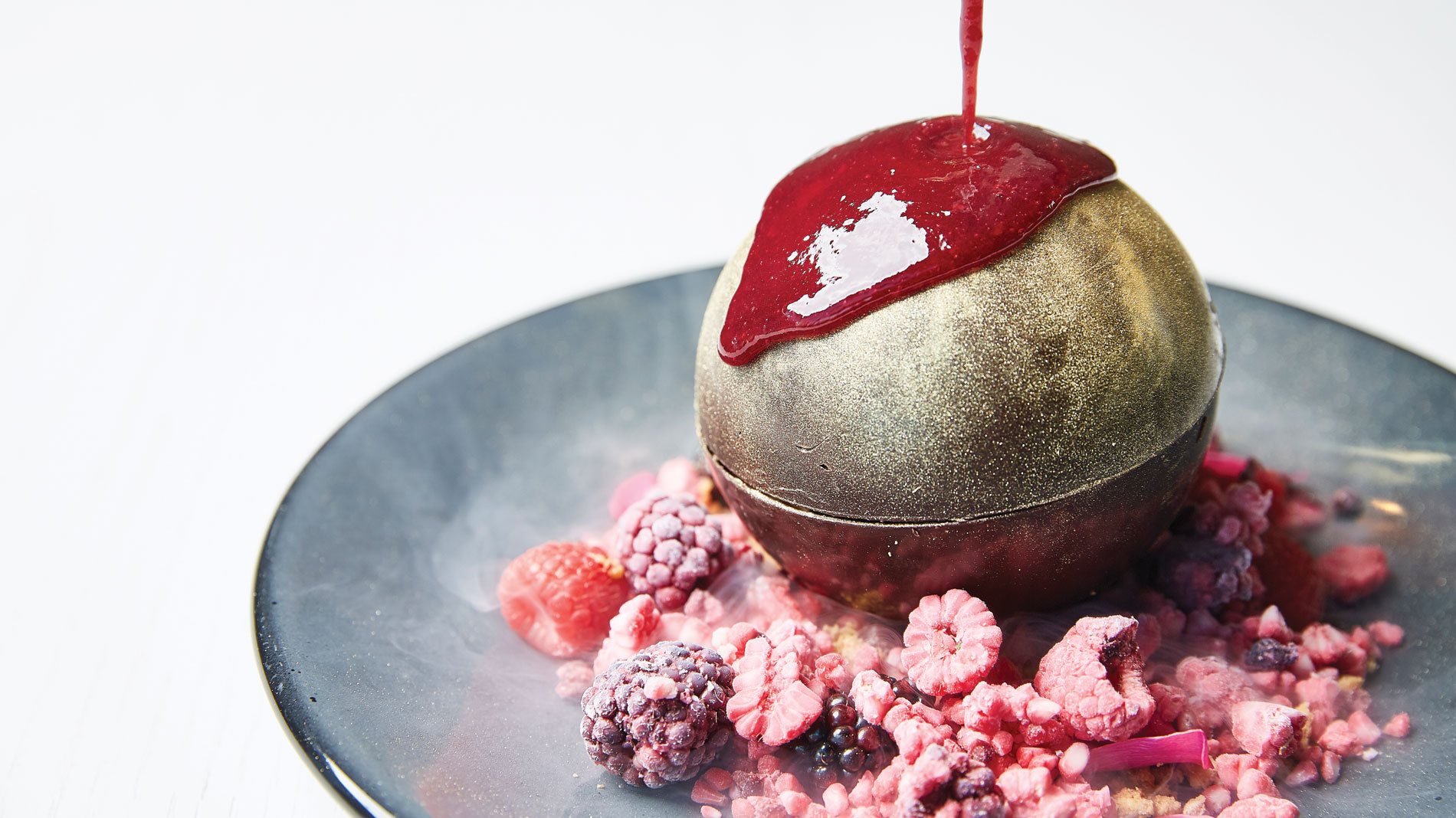 Is the Year of the Earth Pig also the year of The Chocolate Pig? The former occurs once every 60 years, according to the Chinese zodiac calendar. The latter opened five months ago on the ground floor of Innovation Hall as part of Venture Café St. Louis, which is not an actual cafe but part of a global network of drop-in workspace for big-thinking entrepreneurs. If that weren’t innovative enough, it’s tied into the growing Cortex Innovation Community campus that spans the Central West End and Forest Park Southeast neighborhoods. There’s a lot of innovating going on in St. Louis.

You could call The Chocolate Pig innovative. We could agree, for instance, that the chicken-fried Brussels sprouts – crunchy in a cool pool of buttermilk dressing and topped with confit lemon and pickled spring onions – were an innovative twist, at least around these parts, on the typical roasted version. They were an irresistible, shareable snack instead of the same old side, which is probably why I saw them on practically every table.


But innovative is a slippery word, suggesting something so pioneering as to change the course of the modern culinary world. I’d be hard-pressed to label the bacon flight – a platter of house-cured beef, lamb and pork bacon surrounding a schmear of savory-sweet white chocolate sauce – as anything but silly.

Each three-slice serving arrived adorned with its own garnish. A quick-fermented kimchi under the beef bacon, which was drizzled with a thick, sweet soy sauce, lacked any spicy sourness. A tapenade of dried olive, capers, candied lemon and tomato atop the lamb bacon did little to complement the meat’s saltiness, while the pork’s coffee-enhanced sherry gastrique seemed more of a suggestion than a flavorful counterpoint. Because it makes for such a whimsical presentation, some may consider the signature shareable appetizer innovative. Either way, we’ll both pay $16 for the experience.

The Chocolate Pig is the second restaurant venture from Bissinger’s 23 City Blocks Hospitality Group. (The first, Handcrafted by Bissinger’s, closed in February.) The restaurant’s name is meant to evoke both its connection to the chocolate dynasty and executive chef Patrick Russell’s whole-hog cooking. It’s set in a slick, sleek open space with four dining areas ranging from the pastry bar to a semi-secluded, peekaboo nook for four. Like the building itself, the room is designed without a right angle in sight, feeling both isolated and inclusive.

Five entrees provided substantial portions to satisfy meat, seafood and vegetarian eaters. There’s no way the giant seared diver scallops will ever approach their expiration date. Your server will tell you Russell has a connection and flies them in several times a week. It shows. A plate of four mollusks, beautifully seared on both sides and tasting of the ocean, came nestled in a creamy butternut squash puree with a scattering of roasted, smoked mushrooms, crispy Brussels sprouts leaves and chilled pumpkin relish. A couple dollops of creme fraiche made the vibrant colors of the dish pop even more against the canvas of a glazed earthenware plate.

Other entrees held promise but were less impressive. A roasted half red chicken, burnished and drenched with a simple jus lié, was comforting enough on a cold evening but needed salt. Broccolini and fingerling potatoes rounded out the dish, but rather than boulangère potatoes (cooked in a casserole with sliced onions) as the menu stated, mine were merely boiled and served whole.

A gorgeous roasted acorn squash with herbed farro, while colorful with shaved root vegetables, arugula and sorghum berries, was surprisingly bland but for the heat of the pickled chilies. While the braised lamb shank served on a bed of creamy polenta wasn’t tough, it didn’t slide off the bone either, nor was its flavor as meaty and robust as one would expect from lamb. Were it not for a douse of braising liquid, the crowning haystack of fried leeks and bits of candied lemon, I’d still be searching for flavor.


Executive pastry chef Tyler Davis works sweet and savory into several desserts, like the Peanut Butter Bomb, which could have come straight out of an innovation workshop (“Forget Cherries Jubilee: Visualizing New Directions in Wowing Your Diners”). A baseball-sized orb of dark chocolate on a bed of nitrogen-frozen berries and cookie crumbles melts when your server pours warm berry sauce over it tableside, revealing peanut butter mousse and berries. Then there’s Milk and Cereal, redefining the concept by topping malted milk ice cream with caramelized pork rinds.

For all its components – berry compote, chocolate-covered bananas, cookie crumbles, blackberries, raspberries, chocolate, whipped cream and three scoops of different ice creams – The Chocolate Pig Sundae was remarkably underwhelming. No matter how many bite combinations I made, nothing really popped.

Vibe // Sleek flowing space that’s remarkably quiet for its size with myriad seating options (snag one of the back alcoves).