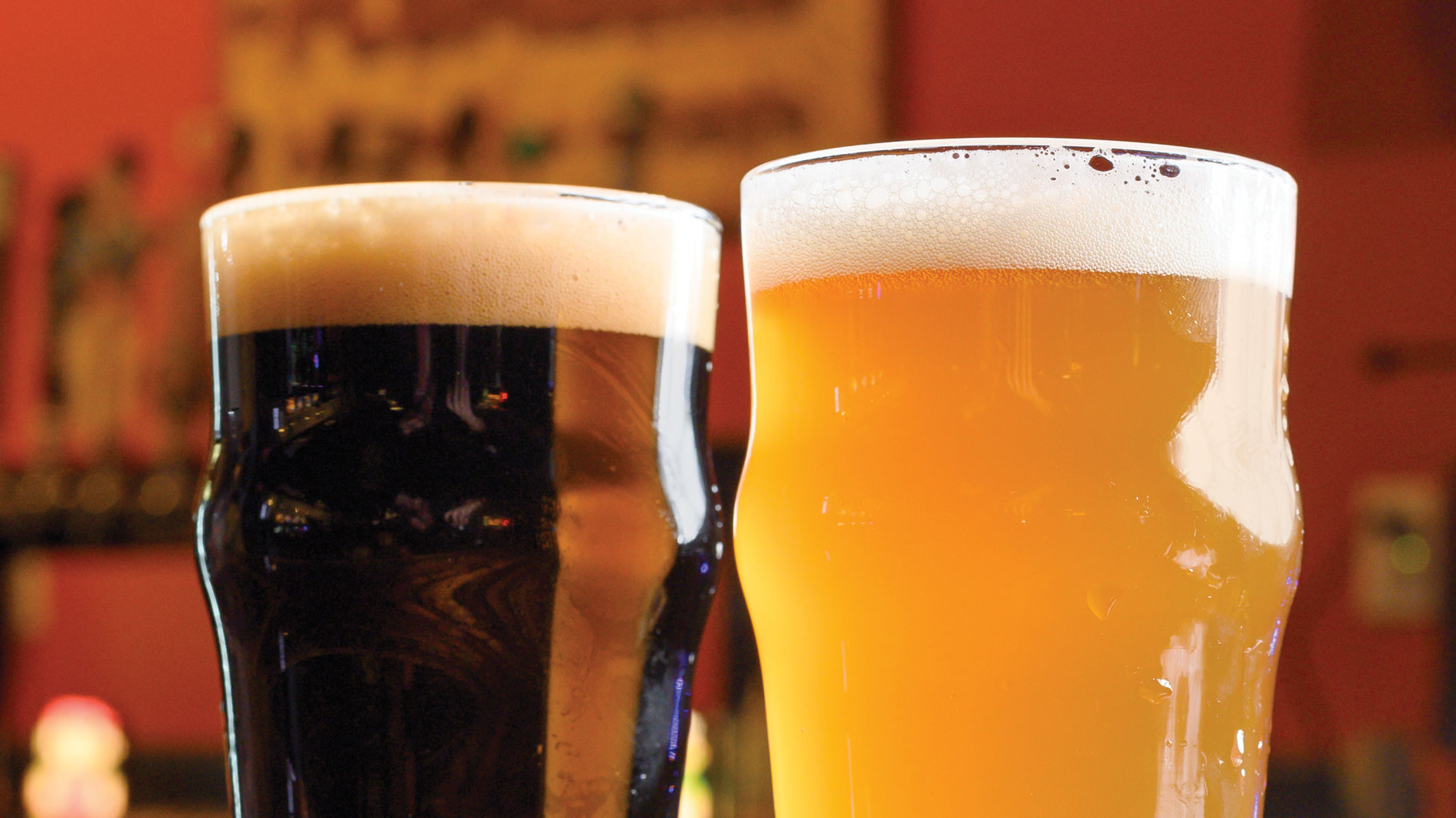 Stepping into Two Plumbers Brewery + Arcade is like traveling to a simpler time, when you’d spend hours playing video games in your friend’s dark, musty basement. Swap the Mountain Dew and Pizza Rolls for craft beer and Guerrilla Street Food, and you’ve got a major upgrade.

Located in a nondescript St. Charles strip mall, the microbrewery and arcade named after Nintendo’s Mario and Luigi has a neighborhood bar feel. The telephone booth in one corner, era-appropriate posters and chairs I’m pretty certain were in my grade school cafeteria will snap ’80s and ’90s kids back to their childhoods.

Dozens of quarter-fed arcade games line the space. There’s lots of themed pinball, from Star Wars and Star Trek to The Sopranos. There are driving games, shooting games and bubble hockey. There are classics like NBA Jam and Dungeons and Dragons. Low-tech gamers can grab a board game from a large bookshelf – the long wooden tables are ideal for getting competitive with a group. All these arcade games make noise, bringing the space to life with a cacophony of dings, bells and other sound effects. It can get busy on weekends, so be prepared to wait for a game if you’re picky.

Between bouts of Super Street Fighter II, be sure to try Two Plumbers’ small-batch craft beers. A sampler of four is available, but there aren’t always four house beers to try. According to owner Robert Schowengerdt, the place has been so popular the brewery’s 2-barrel system is having trouble keeping up. Not a bad problem to have, and one Two Plumbers is hoping to solve with a new 7-barrel production and private event space opening late this fall.

What’s available is solid, if not the most innovative. I was only able to try two house beers: The Pauline American blond ale was light and endlessly drinkable, the way a blond should be, but the Braunem Mantel American brown missed the mark a bit. It had the right flavor profile – nutty, roasty and caramelly – but was slightly bitter. A small selection of additional beers and a cider or two are also available. The beer list is respectable, featuring local favorites like Schlafly and Urban Chestnut and a rotating list of more hard-to-find options like Bell’s Hopslam.

If all that gaming makes you hungry, head to Guerrilla Street Food’s outpost at the front of the bar. The menu is small but mighty, filled with Guerrilla’s signature craveable Filipino fusion fare. The sweet and spicy chicken wings can be ordered in “god mode,” with added chili sauce, Sriracha and chilies for an extra-spicy kick to the taste buds, drizzled with lemongrass crema to cut the burn.

Like the wings, the Mega Taco is true to its name and something my 12-year-old self would have gone nuts over (OK fine, current self too). Two 13-inch tortillas are bound together with melted cheese and wrapped around your choice of Filipino chorizo or chicken adobo along with standard Midwest taco toppings – lettuce, tomato, sour cream and cheddar cheese.

Another winner is the GSF favorite Flying Pig, which comes in either burrito or bowl form. With pulled pork shoulder, hoisin, Sriracha, a slow-cooked egg and more, this dish has a contrast of textures and flavors that’s hard to stop eating, even after you’ve already inhaled a Mega Taco.

The arcade games, nostalgic decor, imaginative bar fare and small-batch beer add up to one thing: a fun night out that doesn’t take itself too seriously. With plans to keep expanding its brewery operations, Two Plumbers is a worthy addition to the St. Louis beer scene.

Stephanie Zeilenga is a critic and contributor for Sauce Magazine.

Like every other small business owner in the country, local restaurateurs were ...

As much as we would love to gather with our extended families ...