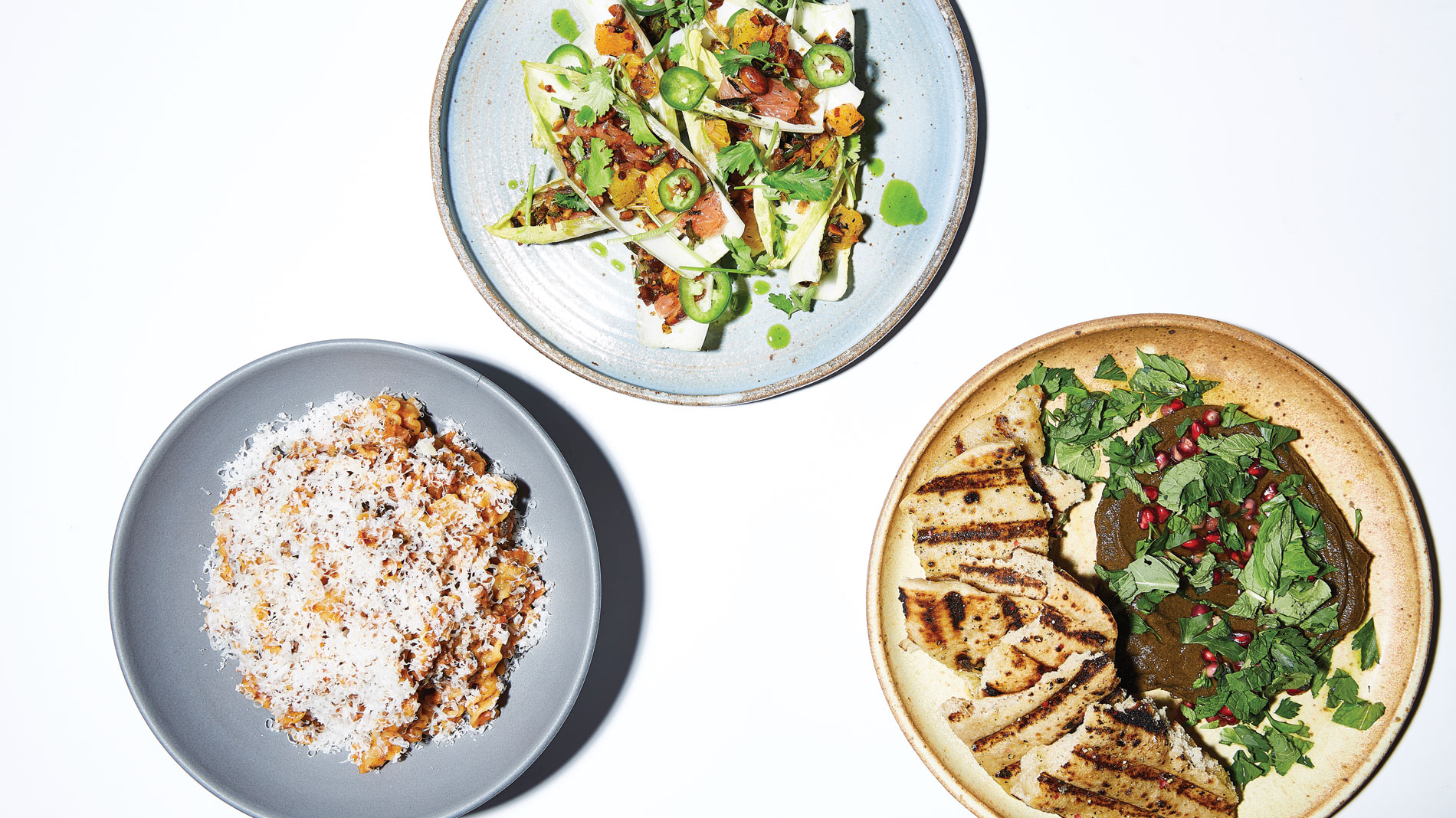 The spice-roasted poussin had been on the menu at Elmwood about 24 hours when my server explained it was already a hit. Its just-charred skin holding traces of fragrant dry rub (Aleppo pepper, cumin, coriander), the delicate, plump and tender young bird was served atop a glistening bed of aromatic muhammara – a Syrian spread of roasted red peppers and walnuts enlivened by Aleppo pepper flakes and pomegranate molasses. Savory, sweet, smoky, a little spicy, a lot dreamy, it exemplified an elusive balance of simplicity and sophistication. I’d eat this dish every night just to keep it on the menu.

That is, if I can resist stuffing myself with the mafalda: tangled strands of ripple-edged, springy house-made noodles perfect for twirling, grabbing and holding a vegetable Bolognese so rich and hearty you’d never suspect it’s meatless. Rather than a food processor, grilled vegetables are passed through a meat grinder for a thick, meaty consistency. A touch of cream ties it together, while a fluffy snowfall of shaved Parmesan crowns the dish.


Those two dishes alone were worth the visit, but for full appreciation, grab a seat in front of the stylish restaurant’s aquarium-like, glassed-in kitchen to watch the choreographed action. Flames flare and knives flash while cooks crank the red ember-filled grill beds up and down to control the temperature and stoke the oven with chimneys of hot coals. It’s the best cooking show in town.

At the center of it all is the magical Josper all-charcoal combination grill and oven, made to order in Spain for the restaurant and the only one of its model in North America. It’s what makes nearly everything on Elmwood’s menu special, like the sweet potatoes that are buried in red-hot coals until charred then pureed for a surprising take on baba ghanoush.


Owners Adam Altnether (the chef) and Chris Kelling (the manager) have traveled extensively, and it shows. There are supremely fresh raw oysters to slurp, but when coal-roasted and drizzled with funky, citrusy Thai naam jim, they become otherworldly. Same for a big bowl of rope-grown, Bangs Island, Maine, mussels, grilled smoky and tender with Sichuan spices and served scattered with shoestring potatoes that had a hint of spiciness reminiscent of Red Hot Riplets. A bacon cheeseburger got a hit of Korean barbecue sauce. Even a snack of peanuts spent some time on the coals before getting tossed with lemongrass and sweet-hot Turkish marash chili flakes.

Slicing grilled pork steak and serving it with butter lettuce cups, leek salad and salsa fresca provided an unexpected Asian twist on the backyard favorite, although I found the flavor of an accompanying grill sauce – made from pureeing vegetables with the liquid captured from other grilled vegetables – monotone and oddly too vegetal.

Salads were no afterthought: Nuoc mam vinaigrette imparted just enough tart, briny funk to the vibrant endive salad with peanuts and serrano peppers, while dark lacinato kale marinated in olive oil provided a tender base for the Caesar.

The observant will notice menu selections are printed in increasingly larger fonts. The curious will discover the font represents portion size, from snacks through full entrees. The diners over 50 may think it’s an eye exam.


You could drink beer with everything on the menu – there is a fine selection – but Elmwood bar director David Greteman has constructed an exciting cocktail menu divided into categories of full proof (heavy on gins and amaros), low proof (essentially aperitifs) and zero proof (fruit-based mocktails). The thoughtful wine list spans Europe while also giving the attention to California you might expect from Kelling, an alum of The Restaurant at Meadowood in Napa Valley.

Four desserts comprise a humble list of sweets, all priced at $10. I liked the idea of the charcoal-roasted whole apple served with caramel and vanilla ice cream, but it came off surprisingly dull, more like a hot apple with scorched skin.

However, a slice of charred lemon tart with a dollop of maple-infused whipped cream and a grind of black and pink pepper proved too exquisite to share. Often too syrupy sweet or artificial tasting, lemon desserts can be chancy. Elmwood’s is neither and should not be skipped while it’s still around.


You’d expect excellent service and attention to detail from veterans like Altnether (a 2009 Sauce One to Watch and former corporate executive chef for Gerard Craft’s Niche Food Group who most recently served as executive sous for the St. Louis Cardinals) and Kelling (the former general manager for Niche, Sardella and Pastaria). If you eat out often, you’ll recognize a number of servers from some of the better restaurants around town now working at Elmwood. It’s a testament to the duo’s focus on hospitality and how such focus draws top talent.

To call what Kelling and Altnether are doing modern American cooking is to grossly underrate their concept. They’ve described Elmwood as “approachable but refined,” but even that doesn’t really capture it as much as three other words: spice-roasted poussin.