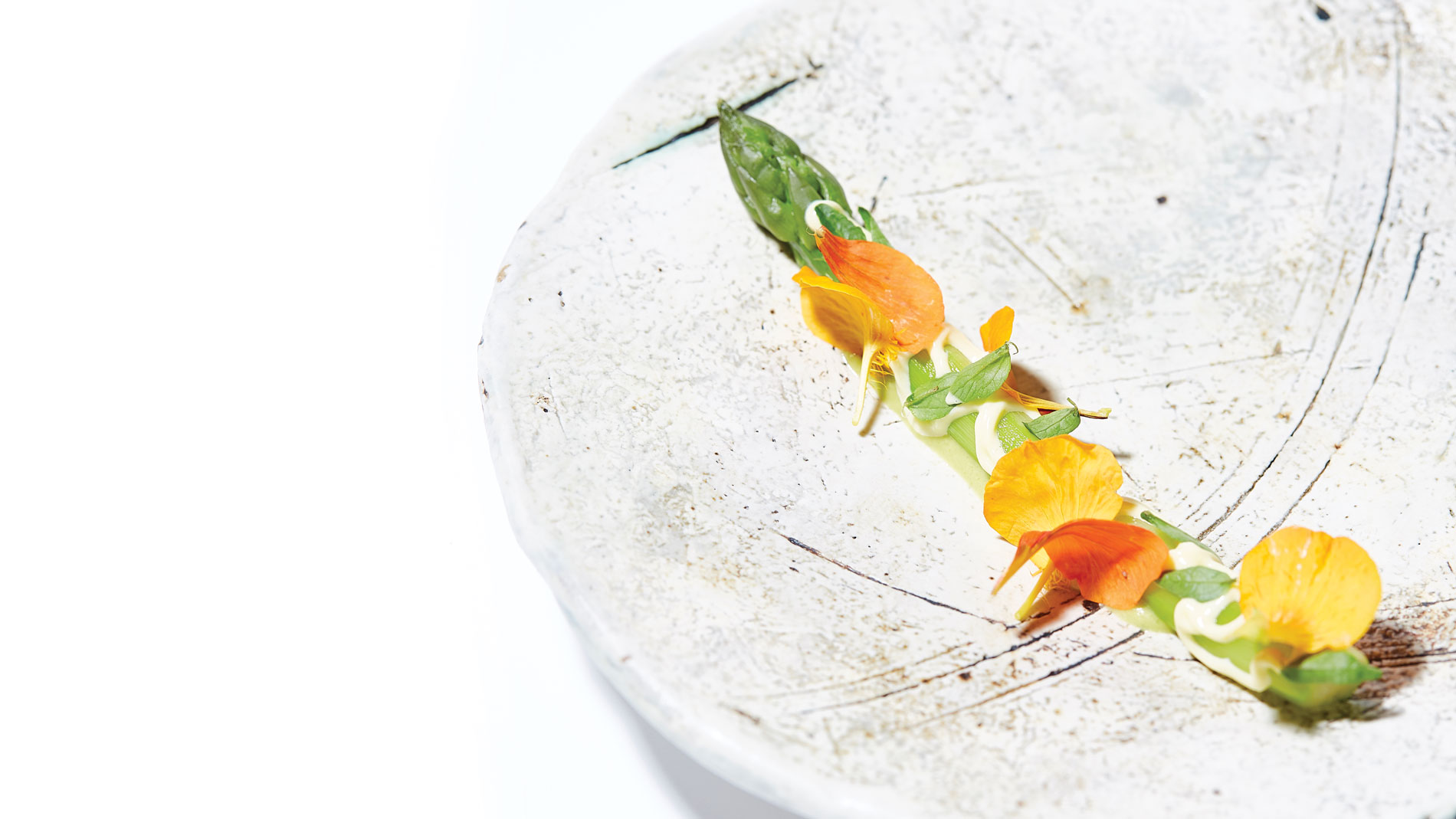 On a Friday evening at Savage Restaurant, which opened last year inside a renovated Fox Park corner store, all 22 seats around the long, bracket-shaped bar are full – and it’s only 6 p.m. Sitting side by side on comfortable, high-back stools facing the open kitchen comprising most of the restaurant’s space, there’s none of the typical table conversation with friends. Whatever chatter there is centers on chef-owner Logan Ely’s stunning multicourse menu.

When not absorbed in her book, the woman next to me visiting from New York snaps photos of her bite-sized moments, “So I can remember what I’m eating.” A couple guys study each dish with scholarly curiosity. We’re here with purpose, to partake in the communal experience of tasting-menu as theater, with Ely in the lead role.

The St. Louis native earned the role through an insatiable desire to find his culinary voice cooking at the erstwhile An American Place, then around the world, from Hong Kong to Copenhagen. Before moving back to St. Louis a little over two years ago, Ely did stints at such highly regarded restaurants as New York’s Blue Hill and Chicago’s North Pond.

But how does a flat broke, passionate chef with a head full of ideas open a restaurant on his own terms? For Ely, the best, and most affordable, avenue was running a series of underground dinners to test those ideas. His aptly named Square1 Project gained notoriety not only for the shock value of incorporating ingredients like bull penis, green weaver ants and fermented yeast, but also for his philosophy of ecologically friendly dining, using the tasting menu structure as a way to control costs and waste. Ely prefers vegetables and seafood and relies on less energy-consuming methods like dehydration, induction burners (the only fire you’ll see is a blowtorch used to char and caramelize) and fermentation and preservation (evidenced by the crocks of vinegars made from leftover wine).

Savage is Square1 made permanent with a tamer, more approachable, albeit no less seductive, menu. There is no puffed, fried bull penis on the plate during my visit. Instead there’s a beet chicharrón, a fantastical take on chips and dip made from pureed, dried beets, deep-fried into a craggy, crackling, crimson puff served with whipped sour milk and chives.

From there, the show progresses at the pace of a sensual promenade rather than a rushed parade of dishes to gulp down before the next one arrives – three hours and 12 dazzling courses. A small staff of servers explains each course – impressively delicious and beautifully plated on dishes made by a local ceramist – with a refreshing lack of pomp or preciousness.

Throughout the evening, the tall, serious-looking Ely hunches over the center island as he and three cooks methodically prepare and assemble with the precision of origami artists, as we, their rapt audience, watch. When Ely does step away from the center island, it feels more like he’s breaking the fourth wall than delivering a dish to diners.

Ely’s challenge with the concept – there’s a six-course option, a 12-course option or a four-course snacking menu – is to keep us interested with exciting flavors, textures, scents and temperatures so our palates don’t get bored midway through the experience. I am particularly enamored by how artfully arranged every impeccable dish looks – spheres, cubes, foams, petals and crumbles. The color of a green tomato, cored and shaped like a flower petal, capped with bits of clam and drizzled with pale green herbed oil, pops against the rustic texture of its plate; a single asparagus accented by a squiggle of creamy egg yolk in a celery root-mussel foam is a study in the various shades of green.

I love the fish. The delicate flavor of a rectangle of baked fluke is enhanced by a miso crust atop a dollop of beurre blanc bolstered by kombu seaweed, adding a subtle mushroom-like savoriness. The firm texture of raw spot prawn comes with bursts of roe accompanied by paper-thin brined cucumber and emulsified cucumber, accenting the natural sweetness of the shrimp.

As the night progresses, incongruences prove harmonious. Lightly braised squid cut into fettuccine-width strands top a spoonful of funky fermented potato mousse freckled by seaweed crumbles has me wondering why until two bites later – oh, that’s why. Slow-cooking an apple for two weeks sounds ridiculous until I taste the concentrated sweetness and jammy texture of the gala, which is served whole and flecked with a “pie crust” crumble.

Lunch – a set a-la-carte menu of five dishes for $7 each – is just as good. That fluke and kombu beurre blanc showed up again, this time with olives and green tomatoes. It still impressed, inspiring my colleague to demand the kitchen feature the beurre blanc more often. Flakes of dried fish punctuated a salad of red romaine and white asparagus with umami funk while a bit of mild, house-made goat cheese went a long way to smooth the bright acidity of a bowl with pickled cucumbers, daikon and yellow beets.

The menu explains the name Savage refers to the restaurant’s commitment to looking to the past for ingredients and techniques, bringing out textures and flavors with less manipulation and more natural methods. Savor might be a more accurate name with fewer negative associations, were it not already associated with a now-defunct local restaurant. But I have no notes for the ideas themselves. After putting my faith in Ely’s philosophy throughout 12 courses, all those Willy Wonka references – quotes on the menu, photos in the bathroom – make sense. Wonka, after all, was an uncompromising visionary who valued pure imagination.

Vibe // Edison lighting, black walls and exposed brick evoke both a subdued speakeasy and industrial starkness, while candles inside and out emphasize the casual, welcoming vibe.

Michael Renner is a longtime critic for Sauce Magazine. 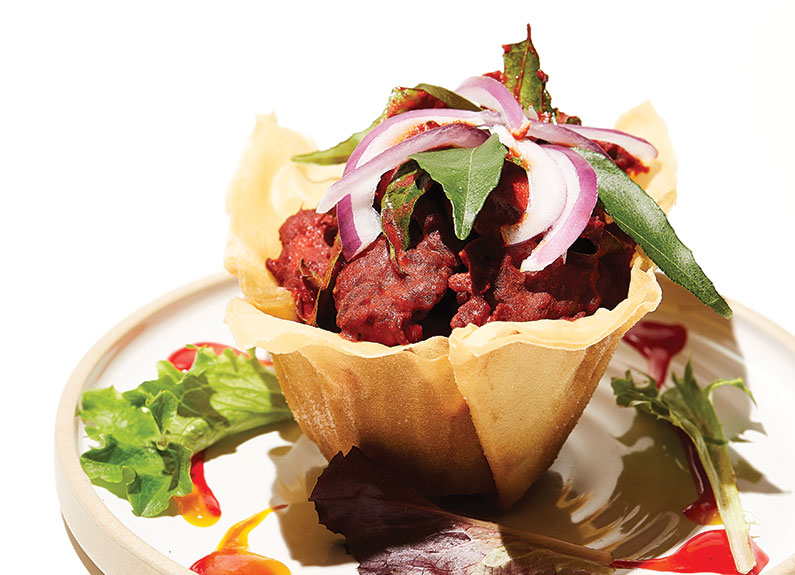