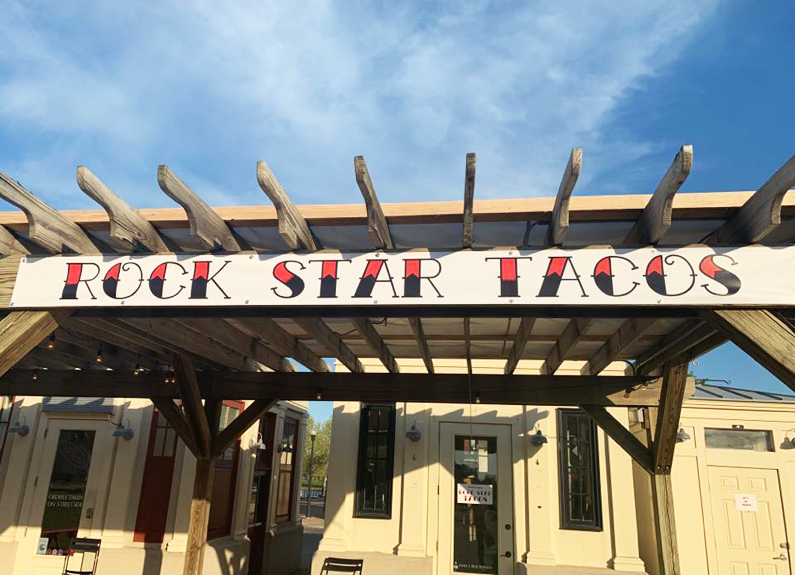 The Shack is the brainchild of veteran area chef Wil Pelly, who most recently was behind the stoves at Nudo House, and business partner Matt Arana. The two have known each other for years and have played music together for much of that time (they currently play together in local band Kingpin). Earlier this year, Pelly said, they began talking about combining their passion for music and food. They jumped in with both feet and completed the project in about six months.

In keeping with the Shack’s rock ‘n’ roll theme, the menu is subdivided into Opening Acts, Headliners and Side Notes, and includes such music-themed tacos as Thunder Cluck (a boneless chicken taco stewed with chipotle), Number of the Beef (ground beef seasoned with signature Rock Star Dust, “our version of chorizo seasoning,” Pelly said), and More Cowbell (Angus beef braised with onion and poblanos, which Pelly said “is like Mexican pot roast.”) Diners can choose from a corn or flour tortilla or as a lettuce wrap. Beverages will include margaritas, Mexican and domestic beers and canned cocktails.

Rock Star Taco Shack doesn’t have indoor seating, but there are picnic tables on site that will seat approximately 25. Pelly said the plan is to build out an adjacent picnic area in the near future.

Opening day hours will be 1 p.m. until 9 p.m. or until sold out. Initially the regular hours will be Tuesday through Thursday from 4 to 9 p.m., Friday and Saturday from 4 to 11 p.m. and Sunday from 11 a.m. to 2 p.m. Pelly said the plan is to eventually expand Friday hours to include lunch as well as start delivery in the New Town area.