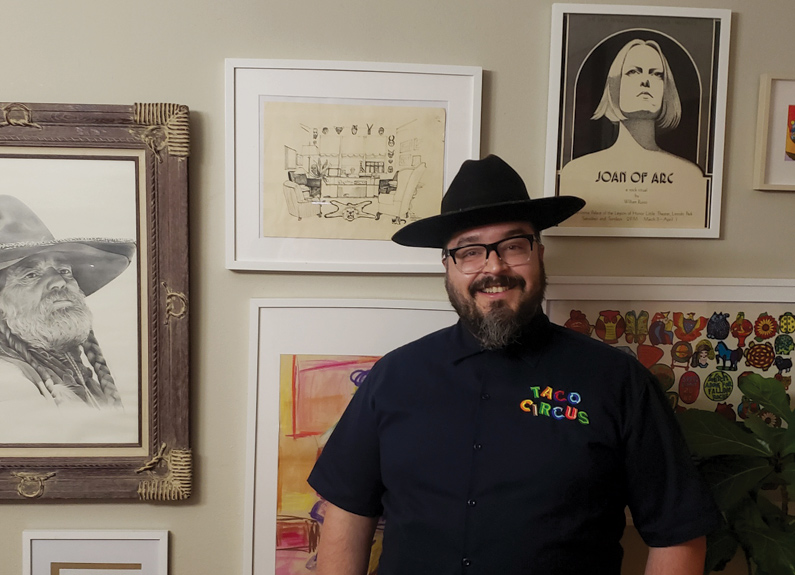 Checking in with... Christian Ethridge of Taco Circus

When Taco Circus finally moved to its new home on The Hill in September of last year, it seemed like smooth sailing. South City residents (and especially those who patronized the original location in Bevo Mill) delighted in its expanded menu, full bar – one and a half, actually – table service and massive patio. None of these things existed in the restaurant’s first iteration. But six months after its rebirth, Taco Circus, like many restaurants in town, is being forced to reassess what it can offer going forward.

When the stay-at-home orders began, they tried to do carryout, but eventually threw in the towel because it started to seem unsafe. “Too many people were walking in,” chef and co-owner Christian Ethridge explained. “We were like, ‘Whoa, this is not how it’s supposed to be!’” After a brief stint doing canned margaritas, the business went silent as its owners took some time to plan their next moves. “I’ve got my beans soakin,’” Ethridge said, assuring us that those next moves are, in fact, in the works. “If you ain’t soakin,’ you’re jokin,’ you feel me?”

We talked to him about the crafts he’s been making, how the whole canned margarita campaign came about, and what he thinks is really going on with the coronavirus.

Before you guys closed, you were collaborating with Rockwell on canned margaritas and Strange Donuts on distribution. Can you take me through how that worked?
I was riding along with Jason [Bockman of Strange Donuts], just to have some fun. We went on [Instagram] live and told some embarrassing childhood stories and hung out that day. We went by Rockwell and they offered. They said, “Hey, if you want to start canning these over here, you’re more than welcome to.” So we went over and started batching ’em up. We need to get a shelf-stable one – I’m looking at putting them on shelves. There’s another whole set of hurdles to jump through if you’re going to be doing wholesale with distributors and stuff. We’ve been looking at it.

What have you been doing since you stopped doing the margaritas?
I’m quarantined. I’ve got a couple people around me – I’ve got this very tight-knit circle of people that we expect to behave in a certain way in order to still be able to maintain contact. So it’s pretty much me and my girlfriend and my GM. And I’ve got a contractor that I’ve been working with, getting the patio ready and doing some stuff over at the building. You know, buildings are alive. It’s weird, if you don’t pay attention to a building, even for a week, you can tell that it’s a building that hasn’t had any attention given to it. We emptied out the kitchen completely and power-washed the whole kitchen. We’re waiting for the reopening.

What have you been doing at home?
Doing crafts and stuff. My girlfriend’s got one of those Cricuts, like a laser-cutter. We’ve just been putting stickers on everything. She just decorated her bike and made it look like there’s confetti on it. You can cut stickers with it. It’s badass. All my cups say “Taco Daddy” on ’em now, so I’m just walking around with a bunch of different pimp cups [laughs]. If there’s any question of who the taco daddy is, it’s the guy holding the cup that says “Taco Daddy” in vinyl-cut stickers.

What are you listening to these days?
I’ve definitely been staying up very late with my music. I’ve got a rudimentary DJ program, so I’ll make myself hour-long blends and mixes that are good to listen to in the kitchen. It’ll make an hour go by like that. You play a couple of those and you’ve got half of your shift down and you’ve just been listening to your own shit. The DJ 18andCounting is definitely my favorite DJ, because he serves the music, you know? He doesn’t serve the crowd. It’s almost like he gigs where he can completely serve his music and the crowd at the same time. His crates are super deep. I really enjoy his stuff. He’s been doing a nightly thing at midnight, going live. I’ve been listening to those.

What kind of stuff is on your mixes?
I really like minimal wave. Old ’80s minimal wave. I don’t even know if that was a genre when people were playing it. I think they were just kind of making that kind of music. And then people dug all that stuff back up and found it, so you can find these gatherers online, on YouTube. There’s been some compilations that have been put out, so you can go back and look at these bands. I really like old ’80s electro-punk, like breakdancing music. And gangster rap. Big UGK fan.

How are you feeling about what’s been going on?
It’s so fucking weird, man. All the playgrounds have, like, crime scene tape around them, so no one plays on them. It’s like, “Yo, can you find another way to get people to not play on the playscape then putting fucking crime scene around the kids’ playscape? Can you make it look any more traumatizing?” Like, did someone get murdered on the playscape? [laughs] No, it’s the COVID virus.

I’m trying to exercise my own patience and sanity. I’m 40 years old, so I’ve had a lot of ups and downs, failures and successes in life. I was in the tech workforce when the internet bubble burst in 2001. I was hit by that and had to change industries at that point. I’ve worn a lot of hats and have had to go in a lot of different directions. I’ve been doing some self pep-talking, like, “You got this. Just stay with your eyes open.” Trying to interpret all the information that’s coming at me in order to handle this thing correctly. It’s going to be a task, there.

You’re big on conspiracy theories. Do you have any about the coronavirus?
You know, the media arm of the CIA has done a great job of disseminating information and disinformation, to the point where you don’t know what’s up or down. It’s all been scrubbed in such a way that it’s almost impossible to find a serious voice without there being a type of rebuttal to whatever you may find out. I do know that I’ve got a friend whose husband is a doctor and she has repeatedly confirmed that the way that it enters the body, what it latches onto, it’s most definitely a bioengineered disease. I’m no medical expert, and I’m trying to speak in layman’s terms, but the way that she explained it to me… just the behavior of it, it’s definitely a bioengineered weapon.

The restaurant’s the restaurant, right? It exists for the people. So the restaurant and the things that I will do for the customers, that’s one thing. But my own personal beliefs on these things.… You want to read between the lines, right? Is this a world government operation? I don’t prescribe to the belief that the U.S. is a sovereign nation and that China is our enemy, or even that North Korea is our enemy, or any of these countries. They're all owned by central banking, right? So in my mind, the world is a stage, and at the top, all these guys are laughing behind closed doors and shaking hands. I don’t actually believe that China’s our enemy.

I believe that there’s a war on the poor by the 1%. I really do believe that. With that in mind, I take a look at it and I say, “Well, is this a world government operation to erode our personal freedoms?” It’s even being led by our own people. There’s callout culture, governing ourselves. We’re basically putting ourselves under martial law without them even having to do it. There’s not the National Guard roaming through the streets in tanks. We put ourselves inside. I don’t fucking believe a thing anyone ever fucking says. That being said, we do live in a civilized society, and I’m going to do what everyone is asking me to do so that everyone around me feels safe.