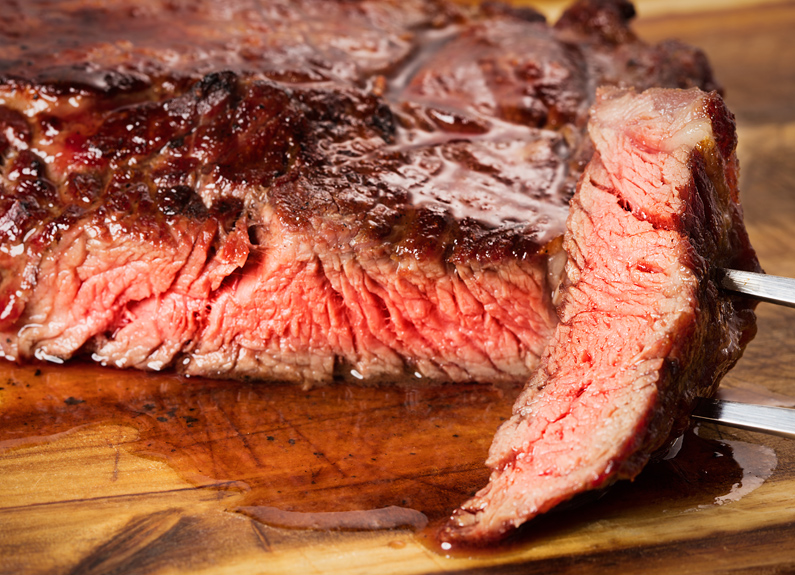 A rib-eye steak courtesy of iStock

As the nation grapples with meat shortages and supply chain disconnects, local businesses are adjusting to a new normal – at least for now.

Major chains like Costco have put purchase limits in place, and local stores are following suit. In early May, Dierbergs Markets set two-item-per-commodity limits on fresh chicken, pork and beef.

“We watch the supply situation daily, which is a typical practice for us,” said Jamie Collins, Dierbergs vice president of advertising and marketing. She said the grocer has had to utilize alternative options in the supply chain.

“Suppliers will cut product for retailers, so they’re in packages available for individual use, but they also provide product for food service outlets, which is in bulk quantities,” she explained. “We’ve been able to tap into that supply, so, as an example, you might see more of those products in tray packaging. … Certainly, as supply does decrease, our pricing goes up, but we’re trying to keep that increase to a bare minimum.”

Some of the more specialized local purveyors like Kenrick’s Meat & Catering have been able to provide product when others have not.

“With a lot of the chains and superstores running out of meat on a constant basis, we’ve become a reliable source for people [to] get their meat,” said manager Steven Weinmann. “Being a meat cutter for over 50 years, I’ve never seen a time where shortages and price volatility has been so unpredictable.”

“Chicken hasn’t fluctated much, but pork chops have basically doubled too,” he said, speculating it could be about six months before prices start dropping.

Although Kenrick’s has no purchase limits, that doesn’t mean it’s a free-for-all.

“Some of the shortage really comes from panic buying and overbuying,” he said. “Buy what you need for a week or two, but don’t hoard too much.”

Although Kenrick’s hasn’t run out of any of their products, they have had to adjust operations in order to stay stocked.

“In the past, we relied on just a few purveyors, but we’ve had to about double the number of suppliers we use,” he said, adding products are still sourced in the Midwest. “With some of these plants opening back up, we are hoping to see some stabilization in the market in the next few months but, if a second wave hits, we could be back to square one.”

Erin Killion contributed to this article.