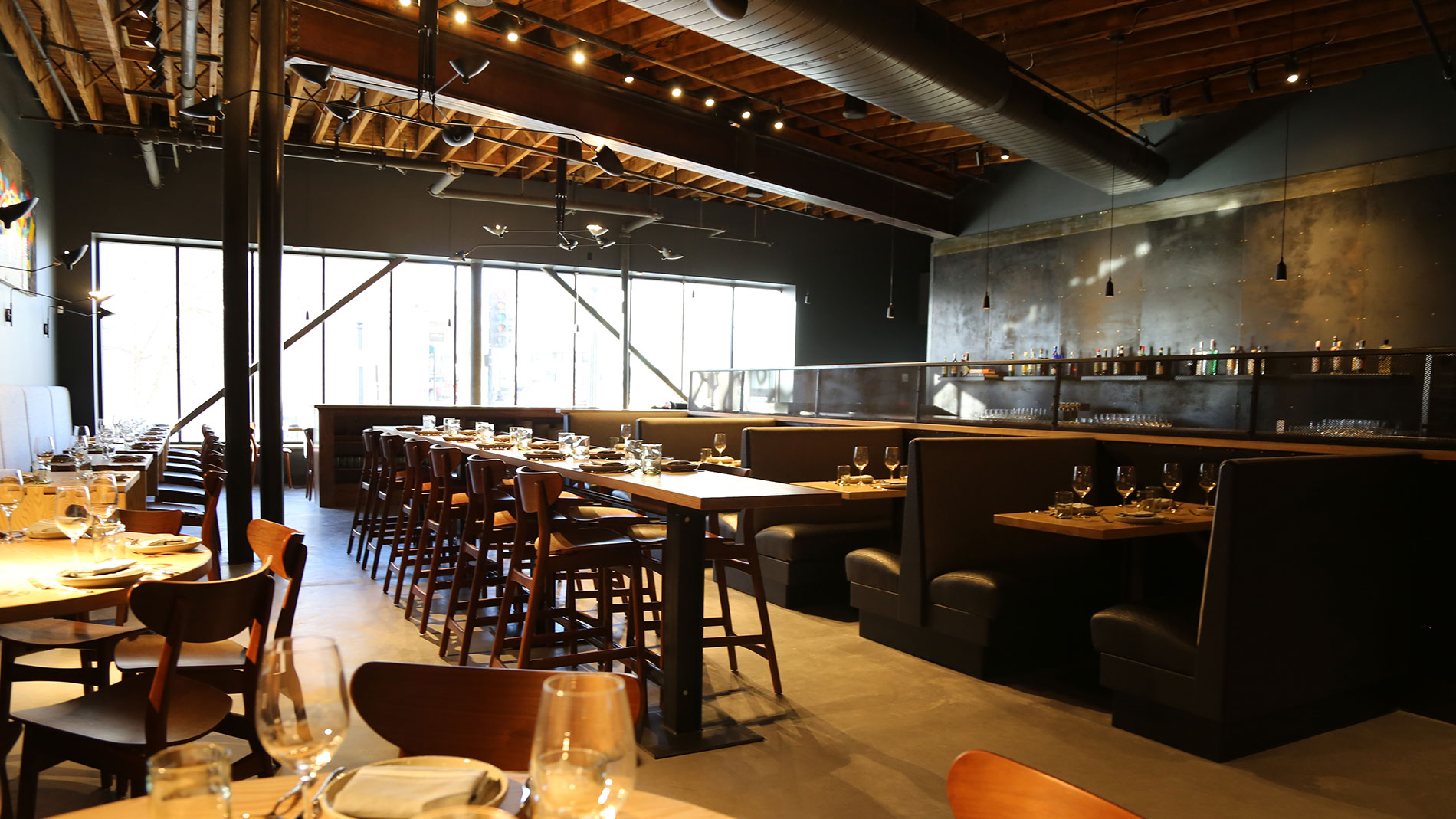 Between fluctuating safety guidelines from city and county governments and rising COVID numbers in Missouri, there’s never been a more precarious time to own or work in a restaurant. Though some local institutions have searched for new ways to entertain guests in-house, others have opted for the long game by keeping their dining rooms closed. Restaurants like Union Loafers Cafe and Bread Bakery and Shift have remained closed to dine-in service while refining their carryout menus; places like Billie-Jean and Taste have stayed shuttered entirely. The question of what to do looms ominously over local restaurants, which are forced to search for a balance between safety and economic security.

While restaurants contemplate how to move forward, the bureaucratic goalposts continue to move. An initial 30-day stay-at-home order, issued by St. Louis city and county on March 23, closed restaurant dining rooms while allowing carryout; a new order issued May 18 allowed dining rooms to reopen at 25% capacity. Alongside the reduced capacity, St. Louis county executive Sam Page recommended the installment of physical barriers between customers and employees “where possible,” as well as a distance of 6 feet between people. At the end of June, the county announced dining rooms could increase to 50%.

The recent collision course between progressing reopening procedures and a menacing COVID-19 swell in Missouri has made dining out only more volatile. With multiple days of record case numbers toward the end of July, dining room capacities in the county were again scaled back to 25%, while Krewson vowed to shut down city bars that weren’t complying with the safety measures suggested by the government.

In many cases, restaurants have had to temporarily shut down because employees tested positive for or showed signs of the virus. Some have tried to avoid that outcome by halting in-house dining entirely.

On July 25, after having reopened for in-house dining, Juniper announced its decision to close its dining room indefinitely, becoming one of the first restaurants to do so. For owner John Perkins, the terrain ahead seemed unstable at best. Throughout Juniper’s dine-in service during the pandemic, he felt it had become “a bizarre experience.” He also noticed that most customers preferred to sit outside. So he made an executive decision. “What I ultimately came to is that when patio season is over, business for dine-in is over. I didn’t want to keep pushing for something that in my mind was a temporary fix anyway,” he said. Rather than wait until cold weather and flu season to have to pivot to carryout and delivery, he preferred to move forward with it now.

Transitioning out of dine-in has given Juniper the latitude to refocus its model. Starting this Sunday, 10 a.m. to noon, the restaurant will be offering a biscuit sandwich pop-up that Perkins hopes will become a recurring feature. He and the kitchen staff are also starting to consider what small, ticketed dinners could look like going forward.

Unlike the restaurants that have been temporarily closing due to coronavirus scares, Juniper’s new paradigm is open-ended. Nobody understands how risky that is more than Perkins. “The longer people stay away from dining in restaurants, the harder it’s going to be to get them back in,” he said. “I think that dine-in restaurants, the way that we’re used to, have been fundamentally ... not destroyed, but severely altered. I’m not even thinking about reopening the dining room.”

Maplewood fine dining spot Elmwood experienced a similar whiplash effect upon reopening in mid-July. Despite having developed strict safety measures, the restaurant made it through just four dinner services before deciding to close again. “It just didn’t feel right,” said co-owner Chris Kelling. “Our brand of hospitality is a genuine manifestation of wanting to care for people, and it didn’t feel right. All through the planning to reopen, there were little things that kept popping up.” Aspects of service like refolding napkins when customers get up to use the restroom and setting silverware turned into significant philosophical questions with no good answers.

“We were fighting this weird battle that was the wrong battle,” he said. “We could tell pretty quickly that our team came back because they wanted to work, but no one was 100% comfortable in the building.” Though Kelling said his goal is to provide a clean and safe work environment, he and chef/co-owner Adam Altnether were left wondering whether they were actually making the right choices. While the four dinner services felt good to them, with customers wearing masks and maintaining social distance, it ultimately wasn’t enough to make service feel normal and to make everyone feel safe. “We’re a big restaurant and when it’s half full, it feels three quarters empty. There was an energy missing,” Kelling said.

In mid-July, Kelling and Altnether turned Elmwood into a month-long pizza pop-up, taking the time to see what a different side of their brand could look like, with the intention to reconsider normal service after five weeks. They’ve turned crisis into opportunity, polishing their takeout game as they look forward to a second concept – a pizzeria.

Prior to the pandemic, Kelling said, they’d been looking for a location to do pizza and had been close to finalizing a space in March. Then the shutdowns changed their plans. “Adam and I both have a history with pizza restaurants. During the middle of [figuring out] to-go, we were like, ‘What if we just did a pizza night?’ And we worked on that concept. We got it dialed in. We were happy with it. It’s an opportunity for us to fine-tune what will hopefully be our next concept in a separate space,” he said. “Really, we wanted to have fun.” A pizza menu earlier in the summer featured a focaccia-style pie, while the menu for August (and maybe beyond) offers eight traditional pies alongside a number of salads, sides and desserts.

Affton food truck oasis 9 Mile Garden, a concept spearheaded by Brian Hardesty of Guerrilla Street Food, had temporarily resigned itself to a similar fate. Debuting in the first week of July, the garden provided an attractive outdoor dining and drinking option, featuring a rotating selection of food trucks like Seoul Taco and Poptimism while its 4,500-square-foot bar offered drinks from local producers like Modern Brewery and Pinckney Bend Distillery, among many others.

Though a food truck garden seemed particularly suited for these times, after a few weeks of service Hardesty decided to close while drafting a comprehensive social distancing plan to be approved by the county. “When we learned of the new restrictions, even though we weren’t required to close down, we were like, ‘OK, until we can figure out a plan to operate with the new restrictions and make sure we’re following the rules, making sure we don’t have gatherings larger than what we can, it felt like the responsible thing to do was to close down.” To Hardesty, it was an easy decision to suspend service “instead of being reactionary and going on, [and] getting shut down because we violated the rules. I don’t even want to flirt with that kind of scenario.”

Hardesty said 9 Mile Garden’s customers were largely cooperative with masking and other policies while they were open. He reflected on those services fondly, saying that the staff’s morale was good and that it was mostly a smooth operation, with no reported outbreaks or health concerns. So they waited for the county to approve their reopening procedures. “Regardless of needing approval, we want approval,” Hardesty explained. “We absolutely want them to say, ‘You’re being smart and safe and please go ahead.’”

With an official county-approved plan in hand, 9 Mile Garden reopens today, Aug. 12. The venue will be open seven days a week, and seating will be outdoors only – no standing is allowed. According to Hardesty, the county did not provide specific capacity requirements, so the space will have designated seating circles spaced 10 feet apart.

The owners of places like Juniper, Elmwood and 9 Mile Garden are making impossible choices, fearing for their businesses and the safety of their employees and customers. On the one hand, these closings have brought new sets of problems to solve, and they place other stresses on the employees being furloughed – immediate economic jeopardy, for one. On the other hand, taking time off from dine-in service gives restaurants space to figure out how to survive in an increasingly tumultuous dining culture. With creative efforts and new business models, they’re just trying to do what they think is right, hoping it will pay off in the long run.

Visit our COVID-19 Restaurant Guide to find up-to-date options for curbside carryout, delivery, patio options and more. If you're a restaurant owner and need to update your listing, click here.