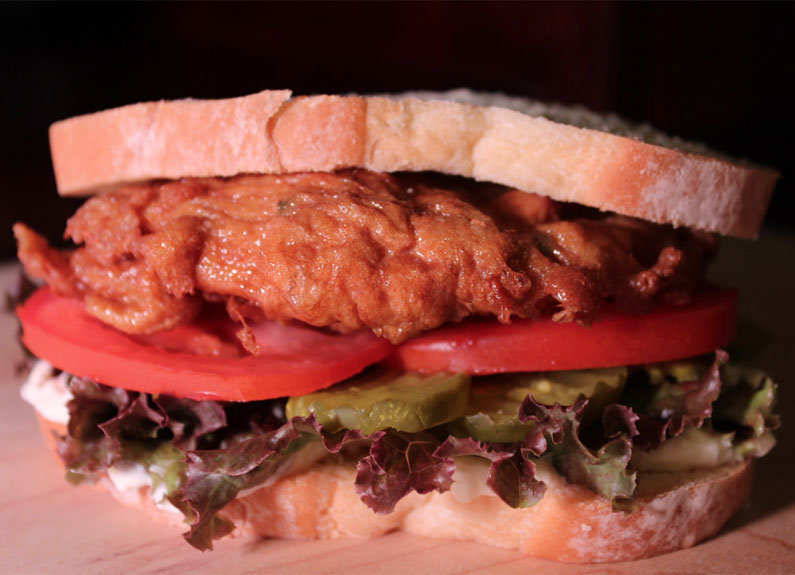 New “food for every mood” carryout-only restaurant Love at First Bite is slated to open by the first week of September at 10479 St. Charles Rock Road in St. Ann.

“I try not to keep salt and pepper shakers around; everything is seasoned to perfection and made with love, that’s why it’s called Love at First Bite,” he said.

Whether it’s in his cinnamon-baked beans or lobster fried rice with drawn garlic-parmesan butter drizzled on top, Lamont aims to subvert expectations in order to give customers a unique and unforgettable first bite. “I’m always playing with different flavors, [seasonings] and herbs,” he said.

The Spinning Chicken Sammich features chicken thighs fresh out of the smoker on grilled sourdough bread with jalapeño seeds and a few fresh jalapeños to spice up spinach-artichoke dip which, together with Provel cheese, is smothered over the chicken before the entire sandwich is put in a panini press. “It’s messy and it’s love, I promise,” Lamont said.

The chipotle-ranch potato salad elevates traditional potato salad with the juxtaposition of smoky chipotle and mellow ranch. The addition of a dill relish brings a savory spin to the traditionally sweet combination of eggs, potatoes, mustard and mayonnaise.

Vegans will enjoy Got It Out The Mud, which includes french fries loaded with tomatoes, shallots, candied Brussels sprouts, impossible burger, jalapenos, and a house-made vegan cheese sauce.

The Sweet Potato Palooza brings the flair of dessert to fries. Tossed in maple syrup, cinnamon and nutmeg, these sweet potato fries are drizzled with a marshmallow and marscapone sauce, doused with powdered sugar, and topped with candied pecans and craisins.

Placing a high value on efficiency, Lamont said all orders will be ready in 20 minutes or less. “I’ll be in the kitchen yelling and screaming if they’re not,” he said with a laugh.

Love at First Bite will be open from 11 a.m. to 10 p.m. (or until sold out) Tuesday through Sunday, although days of operation may expand if there’s a need.