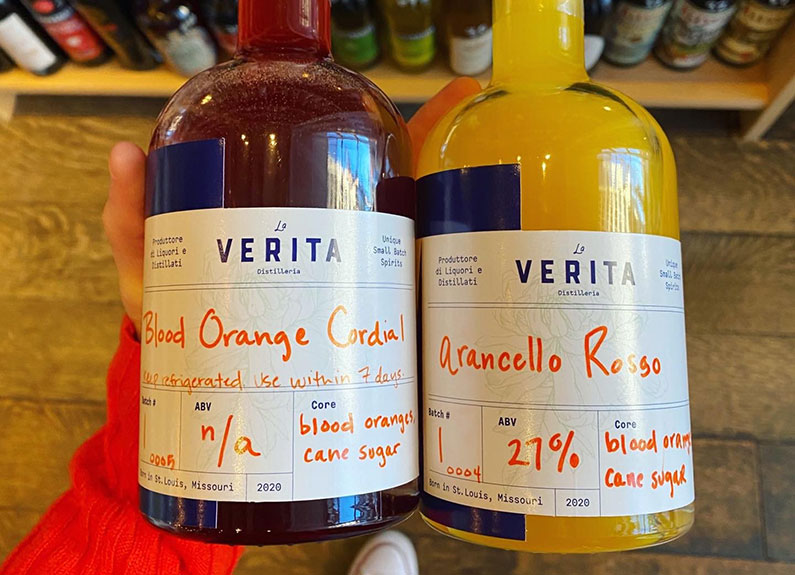 An idea Craft has had for a long time, La Verita Distilleria incorporates both Craft’s and Barry’s Italian heritages while embarking on a bit of a new adventure.

“Together, we’re kind of on this experimental journey to create beautiful things for people to enjoy and use. And it's close to our hearts because we both come from Italian-American backgrounds,” Barry said. “La Verita” means “the truth” in Italian.

The products are entirely produced by Barry from start to finish. “Technically, it's really just cocktails ... because it’s just water, booze, some juice, bittering agents, maybe some herbs and putting it in a bottle,” she said, adding the process of making liqueurs and Amaris takes much longer than the cocktails.

“A cocktail is so immediate,” she said. “When you're creating liqueurs and Fernets and Amari, you have to create it, and then wait and let it rest. Then you can see the final product months later. That's when you know if all of your flavors have melded together like you wanted or if you have to rethink everything.”

While Taste remains temporarily closed due to the pandemic, Barry has hopes for the future – with a goal of eventually turning the Distilleria concept into its own distillery location, though that may be far in the future.

La Verita is currently offering small-batch Amari, Nocino, Limoncello and non-alcoholic cordials while still experimenting with Fernet. Barry said there are ample possibilities for where these early stages of research and development may lead.

“Maybe we’ll find something within the experimentation, and we'll find the ‘new thing,’” Barry said. “That’s the exciting thing about it.”

Bottles from La Verita can now be ordered in person at Pastaria Deli & Wine or made online for curbside pickup.