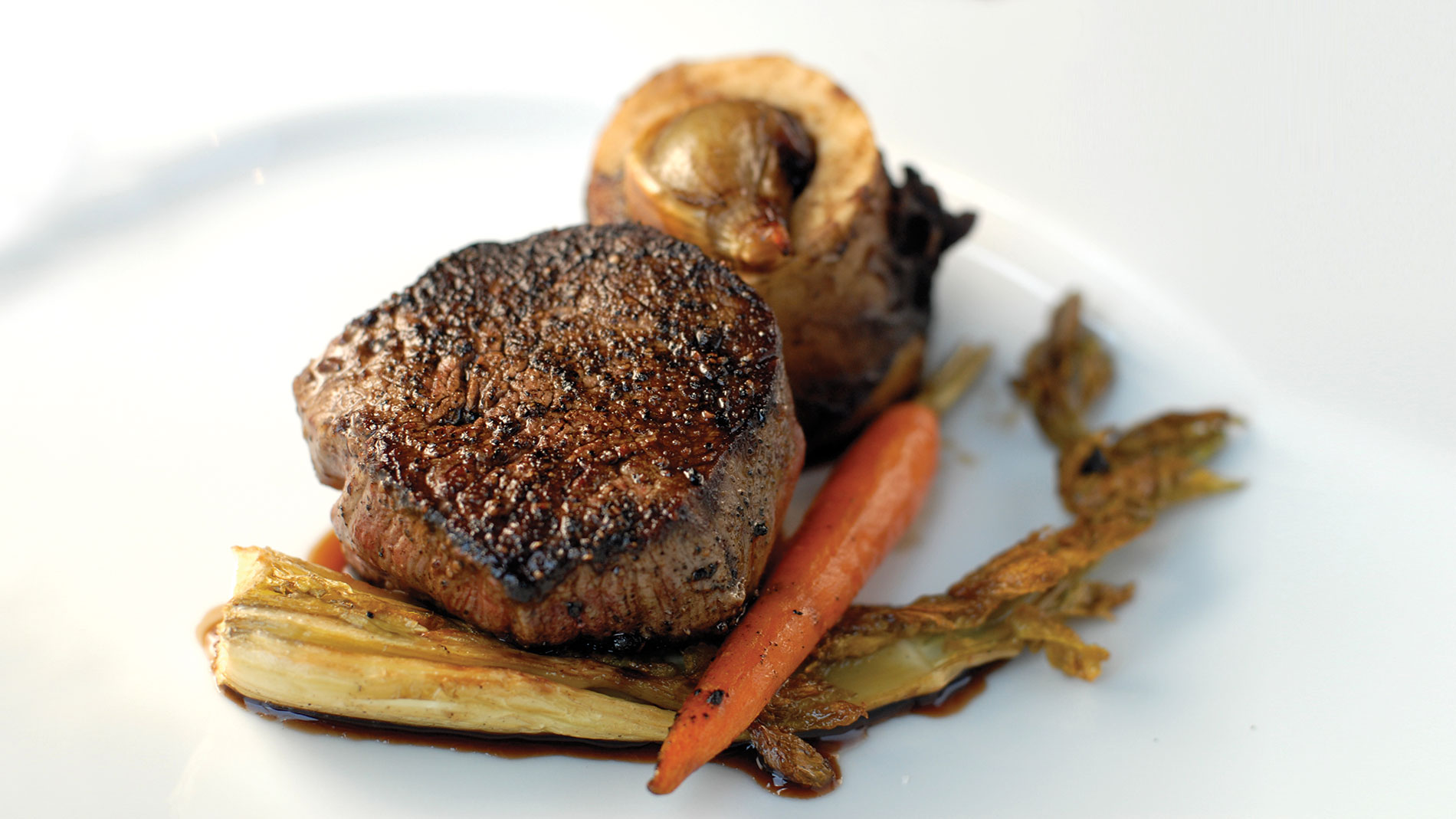 Actually, that image is not too far off. In this case, the quaint eatery is nestled in the Tower Grove East vil – er – neighborhood on the corner of Pestalozzi Street and Virginia Avenue. But The Shaved Duck, brought to us by Scottish Arms owner Alastair Nisbet and chef Brendan Noonan, has little to do with bangers and the British Isles and everything to do with American craft beers and, well, duck: duck confit, smoked duck, duck fat, duck liver, duck sausage and the whimsically labeled duck soup, the soup of the day that “may not always contain duck.” Why, there’s even several carved wooden ducks scattered about, just in case you forgot the name.

The place itself is inviting, exuding the feel of a freshly rehabbed building with its shiny wood floors and bright murals. A couple of café tables and bar stools take up the small bar area, where you can sip creative cocktails like the Newfangled, a twist on the Old-Fashioned made with house-infused honeycomb bourbon. Panels of stained glass separate the bar area from the small dining room in the back, where the ceiling is high and the seating consists of a couple of comfy banquettes and about a dozen dark-wood tables.

The convivial atmosphere pairs well with Noonan’s small plates/large plates menu, allowing diners to nosh and share interesting, flavorful small plates before tucking into one of the four large-plate entrées. Or not. Combine a couple of small plates with one of the charcuterie offerings followed with a cheese board and a meal is made. There is much to sample. Practically everything is made in the restaurant, from the pasta to the smoked meats to the orange marmalade served with fresh baked bread to the ketchup and mayonnaise. Those last two condiments accompany the duck fat frites, and, yes, that would be thin, spiral-cut potatoes fried in – good Lord – duck fat.

Scallop-wrapped bacon caught our eye as yet another twist on a familiar dish: two large sea scallops spiral cut, lined with a thin slice of house-cured bacon, rolled, pan-seared and doused with a honey-balsamic sauce to contrast the subtly flavored reverse dish. The pasta selection varies. One night it was gnocchi with yellow peppers and rosemary, another was an outstanding dish of curry tagliatelle in a coconut cream sauce with roasted shallots afoot. The charcuterie board itself could be explored over the course of few visits. While the smoked chorizo sausage and black-pepper-cured duck breast pleased the palate, some diners may have to adjust to the flavor profile of the terrine of rabbit and duck with blueberry and pistachio. Just do it.

Duck confit has been on a lot of menus lately. Noonan’s version is as densely rich and flavorful as others around town – it’s hard to go wrong with duck leg poached in its own fat – but the slices of thyme-“candied” apple-brown sugar streusel crisps added punch. The large plates, typically between 4- and 6-ounce servings, are perfect when combined with a side, salad or small plate. Slices of juicy seared pork tenderloin were served with warm bourbon-soaked oranges and served atop a mound of beautiful roasted baby fennel. Pairing a chunk of butter-poached beef tenderloin with a marrowbone – as in the Meat & Bone dish – is about as deliciously carnivorous as it gets. The fish offering changes depending on what came in fresh that day; whatever it is, I recommend ordering it. One night it was sushi-grade tuna seared rare with jasmine and cilantro rice; another it was a mild, clean-tasting lemon sole in a white-wine sauce sitting atop a stack of basil-mascarpone potatoes. My only quibble was the oversalting of the fish. Service was superb during both visits as our server was very well-informed, attentive, and just plain passionate about food and wine.

The Shaved Duck prides itself on its large selection of what it calls American craft beers, with about 45 brews available. It should also be proud of building a wine list offering interesting selections – like Huia Sauvignon Blanc and Castano Monastrell – without breaking the budget; wines by the glass run $5 to $9, while most bottles fit comfortably in the $20 to $40 range.

Like those ye olde taverns of the past, The Shaved Duck is a good eating spot for local villagers. With its emphasis on house-made ingredients, creativity and atmosphere, it should be a destination for an entire city.