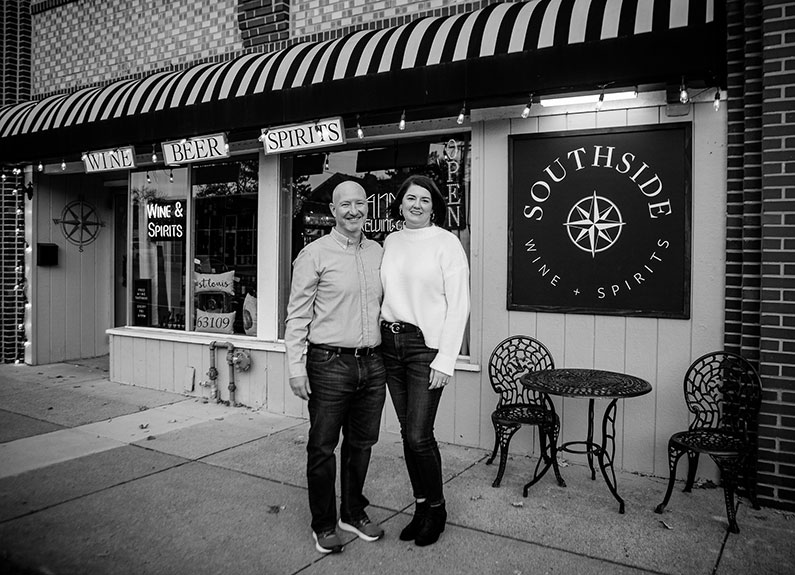 Southside Wine + Spirits, Southampton’s wine, beer and spirits retail shop and tasting room, moved from its location at 4920 Hampton Ave. to a new spot just across the street at 4911 Hampton Ave. on Aug. 27. The new location will be equipped with a bar and space to seat 16 dine-in guests, enabling the shop to eventually expand its sit-down offerings from just tastings to bar service, including by-the-glass beverages and light snacks beginning this fall. Until construction on the bar area is complete, however, visitors can expect a continuation of the same retail and tasting options at the new location, albeit with a larger selection of labels.

“It felt very natural to expand into a bigger space,” said owner Tiffany Harmon. “Our philosophy is that wine brings people together. It’s always been a fun and community-based project, so having a bar and offering drinks by the glass felt like the final pieces coming together.” Harmon plans for the by-the-glass menu to include eight to 10 wines that will rotate seasonally alongside a smattering of flight options. The bar will also serve beer and bourbon, but Harmon noted that guests should not expect to see any craft cocktails on the menu. Bites will include charcuterie and other assorted snacks from Edibles and Essentials to munch on in-house or take to go. Ken DeNeal will keep tastings rolling.

As for the new location itself, Harmon noted that sticking to their Southampton roots was a non-negotiable for her and husband Rob Harmon, who helps run the shop as needed. When the 1,700-square-foot space across the street went up for sale, Tiffany toured it and Russ Smith bought it on the spot on behalf of Southside, although it has not come without its fair share of renovations, with Kate Irwin spearheading the interior design. To accommodate the separate bar and market spaces that she envisioned, the former law office has been completely gutted, with walls torn down and a bar put up. Tiffany describes the aesthetic as “blush and bourbon” with blush colorings and feminine touches juxtaposed against leather accents and an exposed brick wall. Décor also includes subtle nods to the Harmon family, with a custom art piece that includes references to each of them – the hydrangea bouquet from Rob and Tiffany’s wedding, a playing card for their gamer son, a paintbrush for their artsy daughter – to name a few. The gathering table in the bar side of the space is the repurposed mahogany countertop from Dogtown Liquors, the liquor shop that Tiffany’s mother owned for years.

From the nostalgic décor to the hand-lettering on the windows, right down to the plumbing, Tiffany has involved local artists and community members in the renovations wherever possible. “We pull each other up,” she commented, noting she gives particular weight to supporting other women-owned businesses. “Urban Candles is moving into our old space and Cementage is moving into Urban Candles’ old space. We’re not leaving any vacancy!”