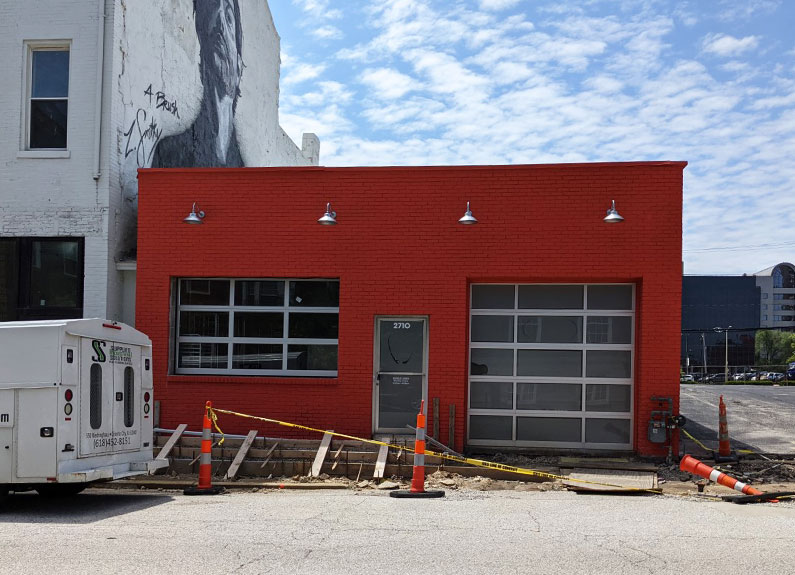 Former Urban Chestnut Brewing Co. head brewer and production manager Jason Thompson, along with Nicole Thompson, will open Blue Jay Brewing Co. in spring 2023 at 2710 Locust St. in Midtown. The brewpub is the final tenant to be confirmed at JC Midtown, which is currently in development with forthcoming restaurants including Nexus Cultural Cuisine and Craft Cocktails, Videira Wine Shop & Bar, Kain Tayo and Anita Café.

Jason Thompson joined Urban Chestnut as head brewer around six months after the brewery launched in 2011. Thompson had gained brewing experience working for Gordon Biersch in California, before stints in the Washington, D.C., area and Chicago. As Urban Chestnut expanded, Thompson moved to a role as production manager, before leaving in 2019. After a plan to launch a brewery with a friend in Illinois fell by the wayside, Jason and Nicole decided to open their own brewery. They used the pandemic to flesh out their plans, and it was around this time that they hit on the name for their brewery. “We just kept seeing a family of blue jays in the front yard during the pandemic, we kept seeing them and we came up with it,” Nicole said.

Having looked at a few locations, the Thompson’s broker showed them the JC Midtown space at 7210 Locust St., distinguished by its orange façade. “Just the proximity to the new stadium and everything else that’s going on in Midtown … it just seemed like a really good fit and a good place,” Jason Thompson said.

Blue Jay Brewing Co. will encompass a 3,500-square-foot brewery and taproom, along with a 2,000-square-foot covered, three-season courtyard patio with access to other JC Midtown venues. The brewery will feature a 10-barrel brewing system in addition to a bar area. “I think inside it’s going to be around 40 customers and then outside around 110,” Jason said.

The location also has a kitchen, which the Thompsons say they hope to use for guest chef pop-ups and eventually to launch Blue Jay Brewing’s own food program. The Thompsons said their menu, when the time comes, will offer “simple and satisfying” dishes. “I’m looking forward to that aspect of the business,” said Jason, who attended culinary school at the beginning of his career. “We just need to get the brewing operations going and see how that goes first.”

In terms of the beer itself, Jason said the focus will be on American and European lager-style beers. “It’s what we like to drink and it’s what I love to make,” he said. Customers can expect to find around 10 to 12 taps at the bar, with the selection likely to include around five core beers: Those could include Pilsner, helles, American lager, Vienna-style lager and a dark lager. “My philosophy is if you have too many choices it’s actually a disservice,” Jason added. “And we’ll definitely need to have some hoppier beers for the IPA lovers,” Nicole said.

“We’d like to bridge the gap a little between the Budweiser drinker and the craft beer drinker,” Nicole said. “They’re not always so different, but I think a lot of people that aren’t used to drinking craft beers are intimidated by some of the stronger flavors and things like that. So if we can bridge that gap, it opens up craft beers to a whole new customer.”

Blue Jay Brewing Co. will join a number of craft breweries in the broader Midtown neighborhood, with the likes of Urban Chestnut and Wellspent Brewing Co. a few blocks away. “We like being nearby the other breweries,” Nicole said. “We’re hoping to at some point work with everybody, maybe do some kind of pub crawl type of thing.”

The newly built Centene Stadium is less than a 10-minute walk from Blue Jay Brewing, so the Thompsons are hoping St. Louis City SC fans will become regulars at the taproom on game days. With the new soccer club’s inaugural MLS season beginning in spring 2023, Blue Jay Brewing will be coming on to the scene just in time for the big kick-off.