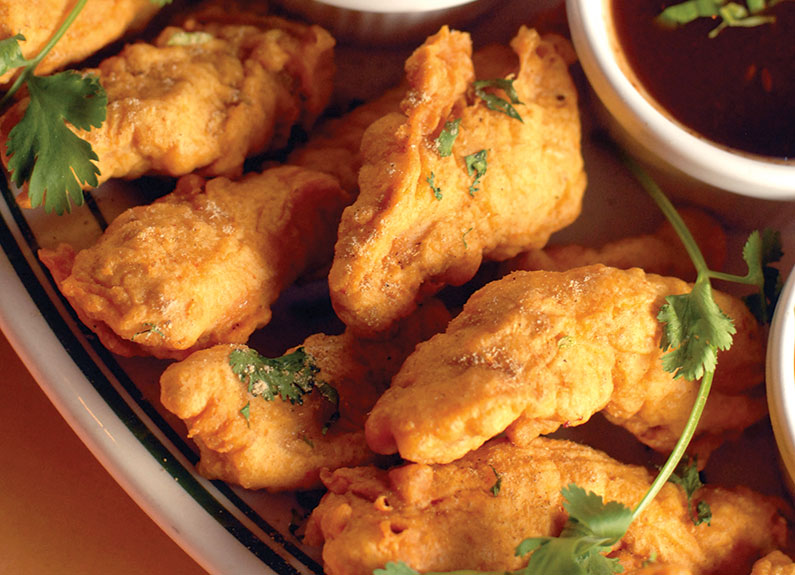 There's nothing quite so unassailable as the determination of a 3-year-old. Confronted with a reality that is completely contrary to his expectations, he will remain resolute in his convictions.

Proof of this came during our first trip to Saffron, when my son Duncan vocally - and repeatedly - informed our waiter, "I'm having pizza!"

True, pizza had been a fleeting blip on the meal-planning radar earlier in the day, but a rare convergence of open schedules allowed us the hike out to West County. Thoughts of pizza were quickly abandoned for the promise of savory Indian fare. Well... almost abandoned.

So what does a smart parent do when faced with an intractable situation like this? Simple. You fake it.

Three-year-olds, thankfully, are nearly as gullible as they are perceptive. Sound authoritative, and they'll usually buy what you're selling. In the case of Duncan's Indian "pizza," this meant an order of garlic-cheese naan. It was bread! It was round! It had cheese on top! Was he fooled? Perhaps not, but he was game enough to play along, which meant we could get on with the business of eating, so that's a win for us.

The rest of the menu at Saffron was a big win, too. After our host gave us a quick lesson on heat levels and Indian spices, my wife ordered the house specialty, chicken tikka masala, chunks of chicken in a creamy tomato-curry sauce. More daring with the heat, I got the lamb vindaloo, tender pieces of lamb and potato in a spicy sauce.

Older son Brendan, who was in the middle of a salad phase, got the house salad, and we got an order of chicken pakora for Duncan. While we waited for the entrees, we split an order of samosas - deep-fried pastries filled with potatoes, onions and peas.

Brendan's salad came first, and I think he was overwhelmed by the size of it. The menu claims it comes with a Caesar dressing, but upon sampling it, Kathy and I determined it was more of a thin sauce made with a yogurt and cucumber base. Brendan gamely worked on it, but was more interested in sharing bites off everyone else's plate. Duncan, too, only made a token effort with his chicken pakora, bite-size chicken nuggets wrapped in a chickpea batter, similar to falafel.

In contrast, Kathy and I were blissed out with our entrees, with their wonderful spice blends and meat that was fork-tender. Indian food is comfort food, no doubt about it, a less-mellow cousin of American stews and French braises. There's nothing like a bite of melt-in-your-mouth lamb, followed by sopping up all the delicious gravy with a flaky hunk of naan.

The boys perked up briefly at the end of the meal, when they got to split a dish of pistachio kulfi - a homemade ice cream - but they were both obviously tired, a fair explanation for their overall apathy. Still, we got around the pizza problem, and we'd introduced them to the cuisine.

That paid off on our second trip, when we hit the weekday lunch buffet. We had much more in our favor: It was early in the day, they were familiar with the place, and, best of all, buffet dining meant no waiting! We also had the added benefit of the boys' grandparents to help juggle plates and keep the boys focused.

The buffet offered many of the favorite dishes from the regular menu. Kadhai lamb, cooked with onions, peppers and tomatoes, was every bit as good as the vindaloo had been. Bright-red tandoori chicken was fall-off-the-bone tender; Duncan liked this in particular. A luscious dal (lentil) soup was warm with ginger and garlic, and could take the place of chicken soup as the new cure-for-what-ails-you. A few nonmenu items, including the vegetarian aloo beans (green beans, potatoes and spices) and the rich chicken biryani were nice ways to sample an even wider range of dishes. Bowls of kheer (rice pudding), served cold, provided a sweet, substantial end and helped cool the warmth of some of the spicier dishes.

While the boys certainly tried more dishes and ate more overall on the second trip, I think the jury's still out for them. A couple days later, Duncan told Kathy he'd really liked Saffron's cucumber salad, "but not the spicy food." Brendan, suddenly a teenager at only 5½, was ambivalent about the whole affair, but offered a mumbled "yeah" when asked if he'd like to go back. For our part, Kathy and I thoroughly enjoyed our trips: wonderfully prepared food, great service and an engaging host who was very happy to tell us all about the background on each dish made for memorable meals.

So two big forks up, and two little forks twirling aimlessly. Maybe a third visit will convert them... but then again, we know how hard it is to get a 3-year-old to change his mind.