For the crunchiest, lightest tempura, the batter matters

Take no offense, but I consider toasted ravioli, our omnipresent appetizer, a dubious claim to culinary fame. Sadly, most renditions I’ve ever tasted have been dense and chewy, or worse yet, oozing with grease. My philosophy: If you’re going to submit to the calories of deep-frying, then why not delude yourself by eating something that gives every appearance of being healthy and light?

Yes, you heard me correctly. The juxtaposition of “light” and “fried” may seem like a mistake, but tempura, a very particular Japanese form of deep-frying, is absolutely ethereal when done right. For tempura, the freshest vegetables or shellfish – as opposed to heavy cheese, potatoes or pasta – are most often used. More importantly, the batter that encases these goodies is delicate and crisp, largely because it lacks thick breading, the hallmark of American fried foods. Now, I’m not claiming that tempura is low-cal – indeed, it’s far from it. However, I do know that it delivers the soul-satisfying crunch I crave without weighing me down with guilt.

There’s no shortage of tempura batter recipes, yet every one boasts the familiar simplicity of three ingredients in roughly the same proportions: 1 cup flour to 1 cup cold water to 1 whole egg. While the recipe’s brevity may pique your interest, don’t let it lull you into complacency in the kitchen. Doughy tempura will be the sure result if you aren’t at the top of your game, not just in ingredient selection but at every subsequent step of the process. Trust me, I had several failed attempts to my credit before I had a single recipe worthy of this column.

Let’s start with your shopping list. Is it best to use all-purpose, self-rising or rice flour? What about cold tap water versus the carbonated water called for by some recipes? And what’s the effect of using a whole egg as opposed to part of it? I tested about 20 distinct permutations of the three basic components and, despite the surface similarities in recipes, subtle differences in ingredients really matter.

Ironically, most store-bought tempura mixes contain wheat flour along with sodium bicarbonate (aka baking soda), yet I found white rice flour, sans baking soda or powder, far superior to both all-purpose and self-rising types. After an initial thrill from the self-rising flour (it puffs most impressively upon hitting the hot oil), I was let down by its grease-sopped, spongy texture. The batter made from all-purpose flour was unimpressive from start to finish. In a cup-to-cup comparison, all-purpose flour is heavier than rice flour and higher in gluten, the protein that gives bread its strength and structure. Without an added lightener such as cornstarch, all-purpose flour simply can’t compete with rice flour’s featherweight feel on the palate.

Tempura recipes universally call for ice-cold water. Some go further and assert that cold batter slows the rate of oil penetration, thereby creating a crispier product. I’m no food scientist, but even to me this logic smelled more like baloney than tempura. You see, when cold items are introduced to hot oil, the oil temperature plummets. The lower the oil temperature, the longer it takes to form a crust that acts as a barrier to oil absorption. So how, pray tell, can cold water prevent grease from being sucked into the batter?

Though I never completely resolved this question, I did find that carbonation is more important than temperature. Use bubbly liquid – mineral water, club soda or flavored soda – whenever you can. The carbon dioxide bubbles trapped in the batter expand when they contact the hot oil, riddling the crust with tiny pores that leave it incomparably light.

I also discovered that a thicker blend – one made with a single yolk as opposed to a white or a whole egg – clings more reliably to what’s being battered. The result is a crunchy coating all around with less running off and into the fryer. Flavorings can be added to the mix, but I recommend sticking to ground spices or very small amounts (1 teaspoon or less) of oil or extract, so as not to radically alter the consistency of the batter.

With respect to procedural advice, almost every recipe cautions against overmixing and notes that the batter should be lumpy. These tips may be critical when working with wheat flour, as mixing develops gluten, which, in turn, can lead to a rubbery crust. (Coincidentally, gluten is also strengthened when it is combined with warm ingredients –
a better argument for using cold water.) However, if you choose rice flour, warnings about overmixing are moot. Not only is rice flour gluten-free, but it is also very finely ground. Even with minimal stirring, there’s no preventing a smooth, homogeneous batter, as the tiny particles quickly and uniformly absorb the water.
In my opinion, the mixing technique to remember harks from, not surprisingly, the Japanese: just-in-time manufacturing. Make the batter in small batches right before you plan to use it and work quickly. To get the full effect of the carbonated water, the batter must remain fizzy.

Regulating the oil temperature is, hands down, the most challenging part of this process, especially when frying in a shallow stovetop skillet or wok. Should the oil temperature drop below 375 degrees, as it is prone to do when you add items to the pan, the tempura will most likely end up greasy and soft. Conversely, if the oil overheats, you can get dangerously close to its flash point, the temperature at which it spontaneously ignites. With an electric fryer, there’s no fiddling with stove dials or calibrating thermometers, as the machine automatically adjusts the temperature as it cooks. What’s more, the frying vessel is fully contained in a deep outer chamber, so grease spatters and smoke plumes are virtually nonexistent, too.

Simple? I’d say deceptively so. Nevertheless, tempura is one temptation that’s worth the extra effort. 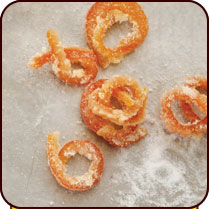 ’Tis the season for sweet treats, from sugarplums to sugar cookies. But this year, consider rethinking ... 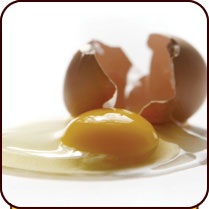 How to make any dish more delicious? Add a poached egg. I’m serious, poached eggs are ... 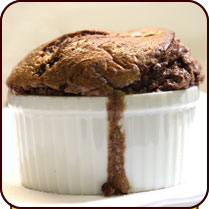 As light as air

Want to impress? Bake a soufflé. Soufflés have an almost magical appeal, complete with their own ...